THE DEPORTATION OF A HAWAIIAN WOMAN WITH LEPROSY IS KEPT SECRET.

The sad fate of a woman with leprosy deported secretly from Los Angeles because of an order by the Board of Supervisors [Papa Lunakiai] is what has gotten the heads of the County perturbed. This woman that was sent away is a hapa haole. She arrived with her husband, George Chamberlain, one year ago; her husband left her, and this woman was found with leprosy by the government officials of the County.

She was sent to the hospital and she was kept alone in a laundry room. She was more troubled by being kept in solitary more than by the disease, and she pleaded them to give her a medicine to kill her. This woman’s ailment was something that was problematic for the heads of the County, and so they decided to send Mrs. Chamberlain to Honolulu.

This deportation from the land was kept a strict secret. She was sent blindfolded to San Francisco, where she was to be put aboard a steamship for Honolulu; and that was the last time she was seen, as she stood atop the ship leaving the Golden Gate for Hawaii.

She gave her word that she would present herself to the government officials here when she arrived in her land; however, until this moment, there has been nothing heard from her; and it would seem that Mrs. Chamberlain carried out her thought to die by jumping off the ship into the sea. One thought is that she was murdered when the sailors aboard the ship found out that she was afflicted by leprosy. The town officials said that she escaped, but however they admit that this was done so that the ship company would not find out. They do not want to say what day and the name of the ship which Mrs. Chamberlain was placed upon, because they are afraid of being sued. 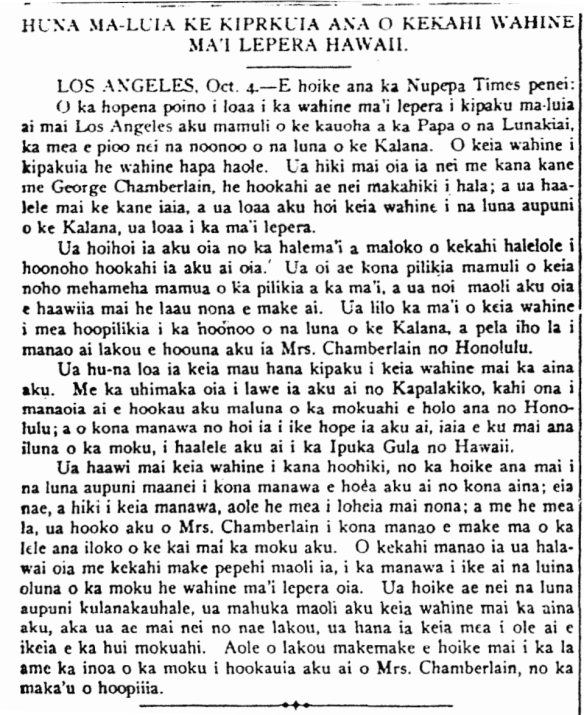