Governor Frear will be the first patron of the new Carnegie Library. He will receive Registration Card No. 1, and will be the first to enter the big building when it is formally thrown open to the public tomorrow afternoon.

Unique and appropriate exercises will characterize the formal opening of the library tomorrow. The program for the exercises was completed yesterday afternoon by A. Lewis, Jr., president of the board of library trustees, Secretary W. H. Babbitt and other members of the board. The splendid new building, made possible by Andrew Carnegie’s gift of $100,000, will be the scene of a notable gathering.

With Mr. Lewis and Governor Frear as the central figures in the ceremony, the program will begin at 3 o’clock, when the Royal Hawaiian Band, arranged for by Secretary Babbitt and Mayor Fern, begins an hour of music.

At four o’clock the ceremony proper will begin. Mr. Lewis will make a short address appropriate to the occasion and will then introduce Prof. M. M. Scott, principal of McKinley High School, who has been prominent in the work for the new library. Chairman Lewis will then, as president of the library board, give to Governor Frear Card No. 1. Then the chairman will unlock the big front doors of the building and will escort Governor Frear inside. According to the little ceremony arranged, the governor will then proceed to the central desk and will be met by Miss Edna I. Allyn, the librarian, who will issue to the executive the first book from the new institution.

As soon as the governor has entered, the public will follow, the entire library building being open to visitors, with the assistant librarians and employees detailed as escorts.

The Outdoor Circle of the Kilohana Club has furnished a number of beautiful palms and ferns with which the interior will be decorated.

Registration cards will be generally issued tomorrow and intending patrons of the library can sign the cards and be enrolled from four to six o’clock.

The new library, it is emphasized by the board of trustees, is absolutely free to everyone and books will be issued upon presentation of the properly signed registration card. There is also a traveling library feature, the committee on which is headed by Robbins B. Anderson.

[Tomorrow will be a hundred years since the library opened! See the many related activities going on in commemoration of this great historical event! It seems that the Royal Hawaiian Band will be there tomorrow morning to celebrate just as they did a hundred years ago!!

I am not sure why I could not find an article in the Hawaiian-Language Newspapers announcing this opening. But there is this from a couple of years later!] 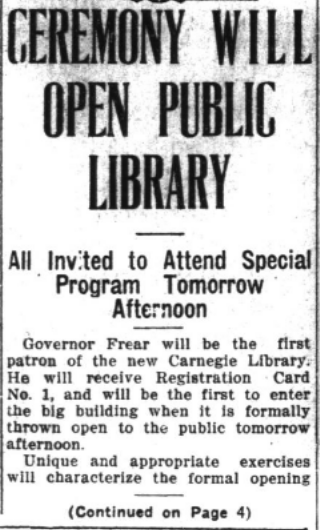 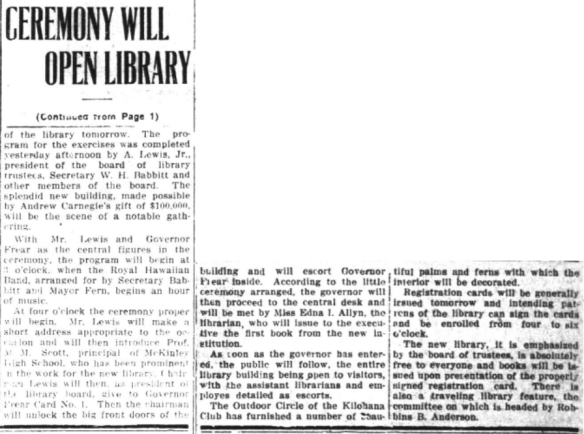