Wreck of the “Pride of Hawaii.”

In the year 1824, the yacht of Kamehameha II, called “Ka Haaheo o Hawaii,” formerly the “Cleopatra’s Barge,” was wrecked at Waioli, in the Bay of Hanalei, Kauai. An unsuccessful attempt was made by the chiefs to haul her up on to the shore, but her masts broke off and she rolled back outside the reef, where she was abandoned and lost. We learn from a correspondent of the Hae Hawaii that two of her guns, of which she was provided with four, have been found by divers and brought ashore, together with some of her iron and copper work. What would appear strange in the account of Mr. Hunchback—for that is the name of the Hae‘s correspondent—is the statement that these guns are not in the last bit the worse for their thirty-three year’s submersion, but that, after removing the outside deposite of shells, &c., they were found bright and sound. They are stamped with the date of their manufacture, 1813. 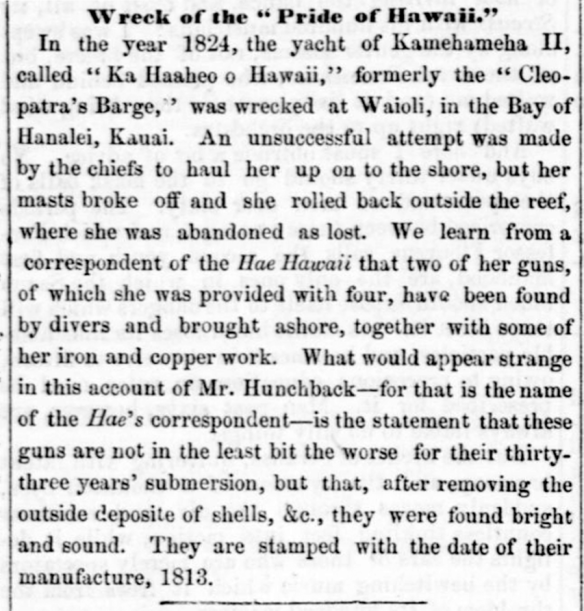