SOME THINGS PERTAINING TO HAALILIO.

Koolau, Oahu, was where he was born; his parents were prominent people. His father died when he was a youth, and thereafter his mother (that being Eseka who is still living) became Governor of Molokai. When he was 8 years old, he joined the family of the King, Kamehameha III, and lived with them. They were at Hilo at this time. When he was 13, Haalilio entered the school of Bingham [Binamu] in Honolulu, and he studied English and… 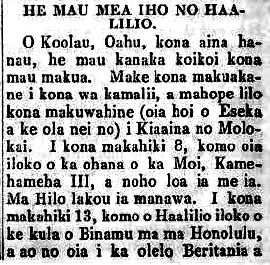