On this past Labor Day, the birthday of Queen Liliuokalani, the members of the Liliuokalani Society and the women of the Kauikeaouli Society gave a luau at Mooheau Hall. Invited to that luau were the heads of the other Societies. They partook of the kindness of the Sisters until their stomachs were filled [ua lawa loa ka lua o ka inaina]. The following night, a European dance was held and many people assembled there, and the event that night was let out peacefully. We pray that the ways of this Society will be followed for the good of the public. 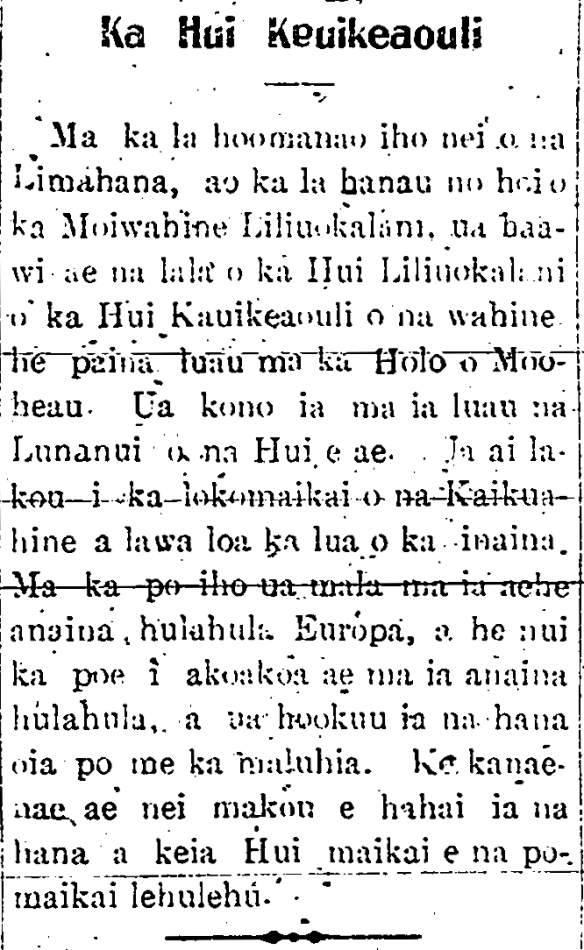 On this past Saturday, September 2, it was the birthday of Queen Liliuokalani, and a royal audience was held midday of that day between 11 a. m. and 1 p. m. in the afternoon.

At 8 a. m. in the morning of this Saturday, the Royal Hawaiian Band [Bana Hawaii] appeared at Washington Place [Wakinekona Home] and played Hawaiian songs which were composed by the alii during the Monarchy of Hawaii nei, and some of these songs were composed by Queen Liliuokalani. The Royal Hawaiian Band played for an hour in the morning to commemorate the birthday of Liliu at Washington Place, and they played once again from 11 midday to 1 in the afternoon.

At 11, the public was allowed to come and see the alii. The Kalama Society, Kaahumanu Society, and Kauikeaouli Society arrived to see the Queen.

The interior of Washington Place was decorated with kahili, just as during the era when the alii ruled—it was beautiful and awe inspiring to see that morning. The Queen sat upon her cotton chair [noho pulu], with two boys behind her chair, holding long kahili, with ahuula upon their shoulders. The Princess Kawananakoa was on the Queen’s right, and Colonel Iaukea was on her left, and he was the one who introduced the Queen to the malihini and to the townspeople. There also, were the heads of the Territory, County, and Federal government. There were many distinguished people of this town who went to see the alii, and by the looks of it, almost one thousand people came during this royal audience.

What shocked this reporter on that morning, was that two-thirds of the people who went to give their congratulations on the birthday of the Queen were malihini and haole. As for the true Hawaiians, only but a few went to see the alii. Reflecting back in time, and seeing Liliu in her finery, i am lulled into recalling the days when Hawaiians were proud upon the soil of their native land.