At least a thousand people sat silent on the beach yesterday, watching a Polynesian canoe-blessing ritual not seen since the days of Kamehameha.

Then with hoots and hollers from the crowd, a hundred hands tugged on the lines to send a spanking-new double-hulled canoe down the ways and into Kaneohe Bay. After some two years of dreaming, the Polynesian Voyaging Society was afloat.

The society is a nonprofit group made up of everyone from just average folks to highly skilled artisans and scientists and they are all pursuing the same goal:

To attempt to send the 6–foot canoe launched yesterday to Tahiti and back next summer, using the methods and tools of the Polynesians who first sailed to Hawaii more than a thousand years ago. END_OF_DOCUMENT_TOKEN_TO_BE_REPLACED

Photo by Robert B. Goodman for Polynesian Voyaging Society

The place is Kaneohe Bay; the date, 1975. But not since the days of Kamehameha has such a Polynesian canoe-blessing ritual been seen in Hawaii. The occasion was yesterday’s launching of a double-hulled craft which the Polynesian Voyaging Society will attempt to sail to Tahiti and back next summer. For more pictures and the story, see Hawaii Report on Page A-3. 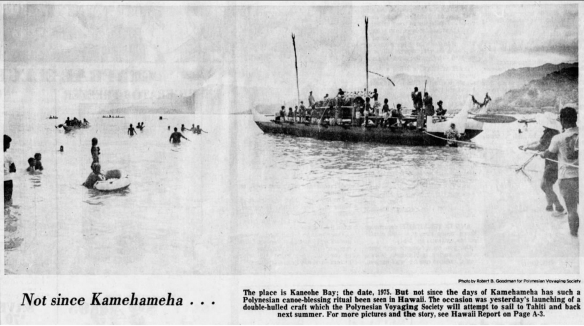 Greeted by a blessing of light showers, flowers, music, dance and many hugs and kisses, the crew members of the Hokuleʻa returned from Tahiti at 1:00 p.m. on June 6.

After 25 days at sea the crew slowly made its way through the crowd to a stage at Magic Island where the Royal Hawaiian Band, Leinaala Heine Kalama’s hula halau, and a musical group with the same name as the double-hulled canoe. Hokuleʻa, performed as part of the welcoming ceremony.

Each voyager was greeted by Gov. Ariyoshi and presented with a wooden bowl. In reference to the voyage Ariyoshi stated “…It once again demonstrates that in Hawaii the skills and the courage and the ability of the old Hawaiian is not lost, but remains with the modern native sons and daughters of Hawaii.”

Nainoa Thompson, the navigator, became the first Hawaiian to navigate by using the stars and currents in at least 200 years. The preciseness of his course has been heralded by many as a modern navigational triumph. Mayor Fasi said the voyage illustrated that: “The people of Hawaiian ancestry in Hawaii…can show the determination to get any job done that they set their hearts on.

This marked the second successful completion of a round trip voyage to Tahiti. The first voyage to Tahiti in 1976 was navigated by Mau Piailug, a celestial navigator from Satawal in Micronesia. The return trip to Hawaii was completed using modern navigational equipment and methods. A 1978 attempt to reach Tahiti ended in tragedy when Hokuleʻa swamped in the Molokai Channel. Crew member Eddie Aikau was lost in an attempt to reach help. The present trip was the first to use celestial navigation to and from Tahiti.

Credit for the successful completion of the voyage goes to many individuals and organizations within and outside of the Polynesian Voyaging Society. Many Hawaiians however, look with pride to Nainoa Thompson as being their hero through his hard work and the invaluable teachings of Mau that successful navigation by a Hawaiian has become a reality.

Much work is yet to be done. Data which was collected on the trip now has to be interpreted. This hopefully will shed further light on navigating by the stars to modern navigators. Other possible uses of the information may be included in ocean survival techniques as well as voyages to other parts of Polynesia in the future.

He ʻiwakāluakūmālima lā i holo mai ma Tahiti a hiki i ka hōʻea a pae ma Magic Island. Ala Moana Pāka ma Honolulu nei. A aia lā, he mau poʻe i anaina i hoʻokipa me ka hauʻoli. A laila, ua haʻiʻōlelo nā poʻe luna aupuni, ke kiaʻāina Ariyoshi a me ka Mayor Fasi me ka ʻōlelo hoʻomaikaʻi no ka holo moana kaulana. ʻŌlelo ke kiaʻāina, “…it once again demonstrates that in Hawaii the skills and the courage and the ability of the old Hawaiian is not lost but remains with the modern native sons and daughters of Hawaii.” 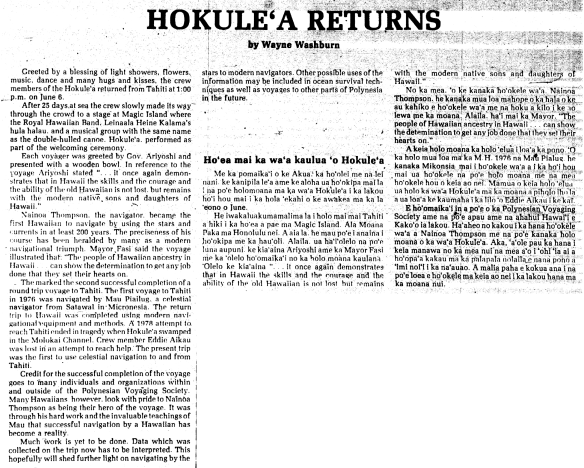