A MELE FOR KAMEHAMEHA V.

O Friends who chase after Ke Alakai o Hawaii, the mele, “Aia i Honolulu kuu pohaku,” is a mele of familiarity [mele hoolauna] composed by Luka Keelikolani when she was coming to here in Honolulu from Hilo to meet with King Kamehameha V.

From what is understood, it is believed that she composed this mele while she was in Hilo before her travelling to Oahu nei.

In this mele are hidden things dealing with the nation in the time of the alii Loka Kapuaiwa Kamakaiouli (Kamehameha V); the contention between the haole and the King, the deceit of the enemies of the King and their attempt to thwart the plans by the King and his court to make Pauahi his wife.

Here is the mele and the explanations of the experts [loea] whose names are: Paulo Kealaikahiki Kapanookalani from whom we received this mele, Kahapula (Prof. Fred Beckley) who teaches at the University of Hawaii, Kawika Malo Kupihea who studied with the loea J. M. Poepoe for fifteen years. James Anania Iokepa who was born in Honomu, Hawaii, Rev. H. B. Nalimu who was born in Papaaloa, Hawaii in 1835, and J. P. Kuluwaimaka the skilled chanter [olohe oli] in the court of King Kalakaua.

[“Aia i Honolulu kuu pohaku” is perhaps the most widely studied mele i have seen, with line-by-line interpretations by experts of the day. It continues on for a number of issues of Alakai o Hawaii. 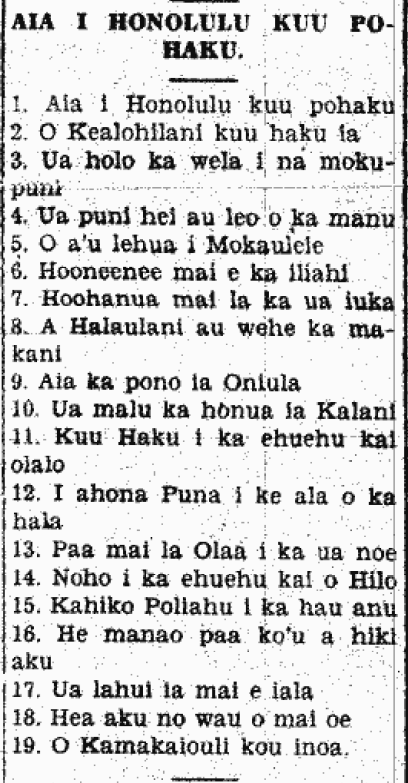