Baptized.—The Honorable Kunuiakea was baptized in the Anglican faith, by the Lord Bishop of Honolulu, at the Church at Peleula, and his name he was baptized with is Albert Fredrick Kunuiakea Oiwiaulani Koenaokalani. Present was his hanai mother, the dowager Queen K. Hakaleleponi, and the Honorable Col. Peter Young Kekuaokalani, and Col. D. Kalakaua. 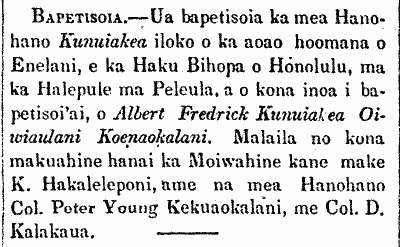 PRINCE ALBERT KUNUIAKEA’S BODY BORNE IN STATE TO THE CAPITOL

PRINCE ALBERT AS AN INFANT.

From a picture hanging on the walls of the home of the late Prince Albert Kunuiakea. Made about 1853.

The Program of the Ceremonies Today.

In the old throne room of the Capitol Building, where royalty once held sway, the remains of Prince Albert Kunuiakea were laid in state yesterday afternoon. At 6 o’clock to the accompaniment of muffled drums and the solemn tread of soldiery the casket containing the body of the last heir presumptive of the Kamehamehas was brought from his late residence in Palama to the old royal estate where the Prince as a boy had been raised in the family of Kamehameha III. The procession from the residence was headed by a drum corps followed by four companies of the First Regiment of the National Guard of Hawaii. Behind the troops came the hearse bearing the royal casket, flanked by young Hawaiian chiefs bearing large and small feather kahilis. These were novel in the startling array of beautiful colored feathers and in the adaptation of ancient funeral customs. Behind the hearse came the mourners, the chiefs and chiefesses according to rank as recognized among the Hawaiians. When the military filed into the Capitol grounds they divided on each side of the driveway allowing the hearse to pass between serried lines of soldiers standing at present arms. Col. Soper and Capt. Hawes of the Governor’s staff, in full uniform, met the remains at the front entrance of the Capitol.

The casket was carried into the throne room and deposited upon a bier overspread with a beautiful pall of heavy black velvet faced with yellow silk. At the head was a magnificent feather kahili of black and yellow and candelabra authorized by the Roman Catholic church. Four huge kahilis, the tabu marks of the royal presence, designated the sacred enclosure and within this, six chiefs, three on each side of the bier, were placed upon watch, waving small kahilis in unison over the casket. From the old throne of the Kalakauas the crown flag of Hawaii was suspended and over the entrances the Hawaiian colors were draped. A beautiful array of palms upon the dais, together with the picturesque old throne room chairs, formed a pleasing picture. When the beautiful crystal candelabra were illuminated the scene beneath was spectacular.

The main staircase from the hallway was lined with palms. The waving of the kahilis, and the chanting of the genealogy of the Prince were continued through the night and will be a part of the weird ceremony until the casket is borne from the palace.

From 11 a. m. to 1 p. m. today the body will lie in state in the old throne room of the Capitol. From 1 to 1:20 p. m. the Roman Catholic service will be said, Pro Vicar Libert officiating. A detail of the National Guard was assigned as a guard of honor yesterday afternoon and will remain under arms until the procession moves this afternoon.

The order of procession today appears elsewhere in a By Authority notice.

A special meeting of the Board of Trustees of the Queen’s Hospital was held this morning in the Chamber of Commerce room. The object of the meeting was to consider the advisableness and feasibility of transferring the antiquities and curios left to the Hospital by the will of the late Queen Emma to the Hon. Chas. R. Bishop, who is about to open a national museum. Mr. Kunuiakea, one of the heirs of the Queen Emma estate and part claimant of the curios, consents to give his interest in them to Mr. Bishop for the purpose mentioned, on the condition that the Queen’s Hospital also give their interest. It having been the wish of the late Queen Emma to have a national museum in Honolulu, and such wish having been specified in her will (signed but not witnessed), the Trustees of the Queen’s Hospital have decided to deed to Mr. C. R. Bishop all the curios and antiquities left them by the will of the deceased queen, on the condition that all the ancient relics left by the late High Chiefess Pauahi Bishop, be also given to the museum. 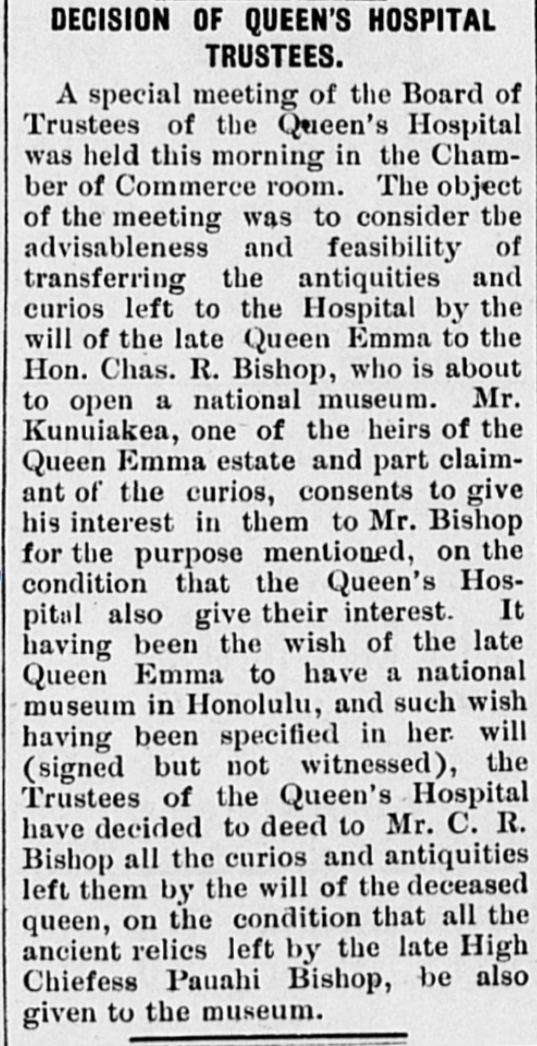 A special meeting of the Board of Trustees of the Queen’s Hospital was held yesterday. It was called to consider the question of conveying the Hawaiian antiquities and curios, devised to the Trustees by the will of the late Queen Emma, to the Hon. C. R. Bishop for a projected public museum. Mr. Bishop had sometime ago formed the purpose of founding a museum of Hawaiian antiquities, with the collection of his late consort, Princess Bernice Pauahi Bishop, as the nucleus. END_OF_DOCUMENT_TOKEN_TO_BE_REPLACED

WHO LOWERS THE FLAG?

Consultations Being Held—Preparations for Presenting Views Before the Commissioners.

The proposed Hawaiian political society spoken of in the Bulletin a few days ago has not yet completed all arrangements for organization but in a few days some definite action may be looked for.

The men at the head of the movement look upon it as most vital that a committee of representative Hawaiians be appointed to present the views of the Hawaiian people before the Commission that is soon to investigate matters in Hawaii preparatory to the framing of laws for her government.

Messrs. Ka-ne and Poepoe, two of the leaders in the movement referred to above, are at present consulting with various prominent Hawaiians on the matter of the lowering of the Hawaiian flag. They have agreed that it would be the correct thing to have a native born Hawaiian lower the flag for the last time, and they name Prince Albert Kunuiakea as the one, who should be selected to do this. Should he not consent, Judge Kalua is named as second choice. At any rate, the Government will be consulted in regard to the matter.

On the other hand there are natives who think that such a proceeding would be distinctly inappropriate and not at all in accordance with the feelings of the mass of native Hawaiians who would refuse point blank to take any part whatsoever in the lowering of the Hawaiian flag or raising of the American.

[This is one of the articles in the English newspapers of the day, on the subject of having a Hawaiian be the one to lower the flag.]