Of What Are They Afraid?

The Advertiser this morning says: “The landing of the troops from the Boston furnishes a guarantee that the persons and property of American citizens will be safe from violence, etc.” What are those who claim to be American citizens afraid of? From what quarter is violence expected? None whatever, except like Banquo’s ghost,¹ from the “deep shadows of cowardly and guilty consciences.” It would be well under present circumstances, for the Advertiser to come forward and state to the public who were the ones that forced the late King at the point of the bayonet to break his oath and forswear the late constitution that he had sworn to uphold? 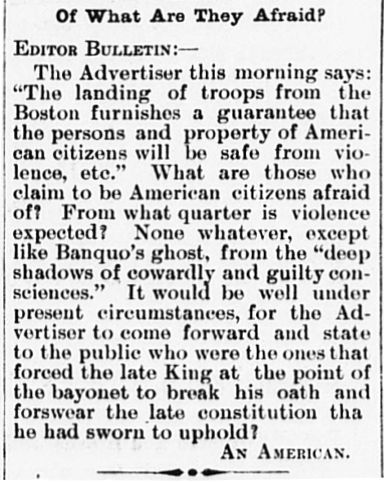 A VOICE OF ALOHA,

From the Queen, thus: O My beloved people, return to your homes, and keep the peace of the land. The voice of the alii has mana, and her command is in force. This is mana by which war will not be started; and the people will abide by her command.

The Overthrow of the Government.

This was an act that was planned in advance, and it is an act to gain glory. It’s foundation was laid by the group of missionaries and group of sugar planters, and on Jan. 17, 1893. Weapons were taken up, and the Government Building [Hale Aupuni] was seized by those treasonous ones.

There are five members of that Committee; They left, fled, and reached Washington; and they returned separately all with nothing to show and much embarrassment. [a hoi liiilii mai ana me na alaala pakahi ma ka a-i, he mai nui ka hilahila.]

This Administration ended some parts of their bayonet constitution [kumukanawai elau-pu] of 1887, and enforced oppressive, limiting [?? paikole], and burdensome laws; these were laws not made by the Lahui, but by a group of just 17 people.

There have been two Hawaiians whose blood has flowed unto the earth; they were shot with guns of the evil ones; However, they survived with their precious lives. It is God who spares Hawaii. This bloodshed of Hawaii’s own will become seeds from which will grow equal rights for the Lahui and the land. Rise together O Hawaii—and listen to the Gospel of Christ.

PREPARING THE MOVEMENT FOR THE GOOD OF HAWAII.

The opinion printed below this heading comes from letters received from our friends. All criticism for those opinions fall upon those who wrote the letters, and not upon us. (Editor)

O Mr. Editor:—I ask for your patience, being that I am a true Hawaiian.

Whereby two-thirds or more of this lahui are of the opinion to form an appropriate Association for the benefit of the Hawaiians and the foreigners.

Whereby the Cabinet of Ministers in power now stands upon sand, where when the rain beats down and the wind blows, it will fall, and that shall be their fate.

Whereby this Cabinet of Missionary Ministers are in government positions without the confidence of two-thirds or more of the people residing here and some who are observing from elsewhere.

Whereas the circle of Missionaries intends to long hold the power in the workings of the Government, while clearly going against the laws of this land.

And Hawaii intends to look after its own good, without fear of the opposition facing it. Whereas all enlightened Hawaiians know that they have this responsibility.

Therefore, they have no desire for the power of the Governmental offices of their beloved land to be put to waste by this circle, and to have them [the ministers] enter Hawaii into a debt that cannot be repaid.

Whereas I speak with truth in enlightened manner. Whereas the laws not approved by the King, and not signed by him; they have no power to become law over this lahui.

Therefore, time is near for Hawaii to consider, and to discuss what is right, and of the advancement of its efforts, its land, and the King.

O Editor, I shall constantly fill your paper with delicacies, should this topic above receive your kindness.