Comparison of New Zealand and Hawaii, the Hawaiian People and the Maori.

In the English morning newspaper [Pacific Commercial Advertiser] of the 17th of June, that mouthpiece published a clarification between the island of New Zealand and Hawaii, the population of the Maori lahui living today and that of the Hawaiian lahui.

However, the Maori have 500,000 heads of sheep, 60,000 heads of cattle, and 50,000 heads of horses. In Hawaii nei, the job of raising livestock is left to the other ethnicities, and the Hawaiians themselves, they raise a few chickens and a couple or three pigs.

In comparing these islands, New Zealand is fifteen times as big as Hawaii nei, but the total Hawaiians are more than the Maori per square miles; the comparisons put forth by the English paper are correct, all but what was said about our few chickens and pigs.

¹The kolea is the migrating plover, that is used to symbolize people who come to Hawaii, and like these birds, feed off of the riches only to leave after getting fat.

[I will have to check on who the writer was. Too bad the Advertiser is not online!] 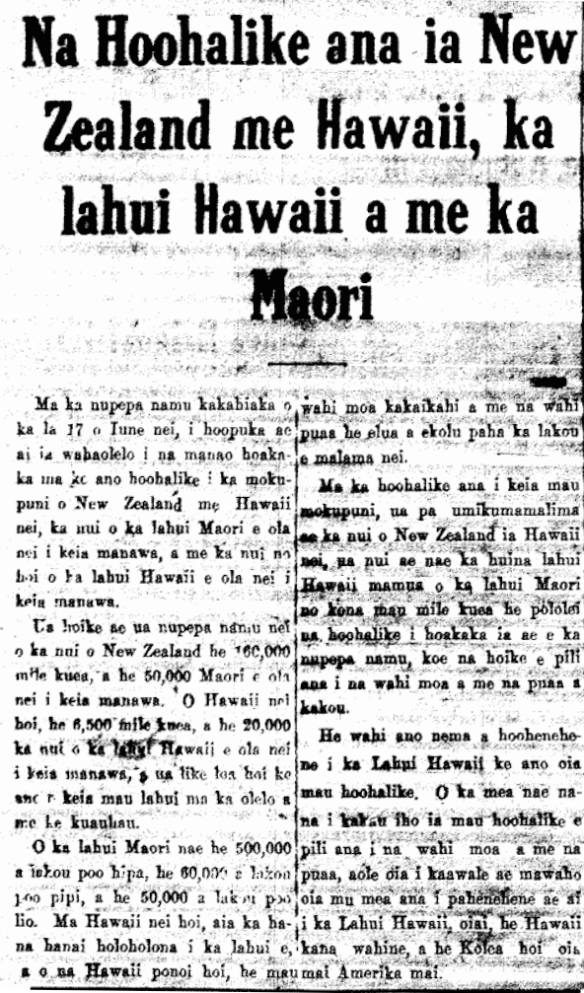