A Gift.—This past Wednesday, at 9 o’clock at night, one of our coworkers at this Office was given a gift, by his Lady giving him a large, well-developed girl, who weighed even eleven pounds. To Mr. H. L. Sheldon, the Editor of the newspaper “Advertiser,” goes our shared joy for his being blessed with a beautiful grandchild, as we ask of the Heavens to continue to send this type of gifts, to once again increase the lahui of King Kalakaua, the king of whose reign is said,

¹One of the great goals of King Kalakaua was to Hooulu Lahui, or to increase the Hawaiians. 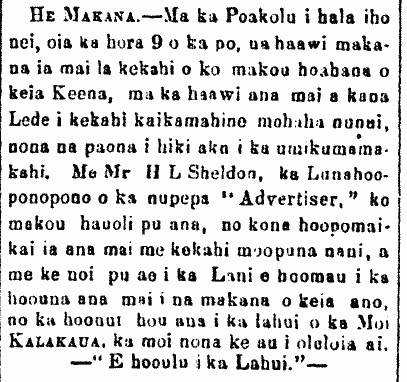 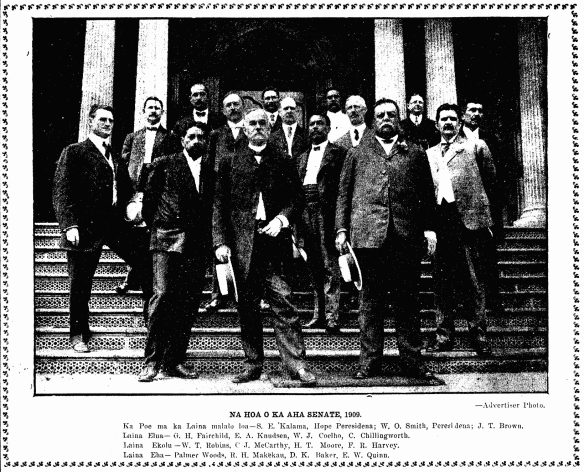 The Gazette, always our neighbor, sometimes our friend, has very generously called attention to our enterprise in giving the “Alta Hoax” to the public just one hour after the arrival of the Alameda. We are truly grateful for some small favors, and in returns for the italicized notice of our friendly neighbor, we will give due publicity to the following,  clipped from its columns, with our illustrations bracketed between:

“The following definition of ‘true criticism’ is clipped from one of our exchanges and is given herewith for the benefit of the writer of the editorials in the Gazette:

“Criticism differs from defamation in the following particulars:

“!. Criticism deals with such things as invite public attention, or call for public comment.”

(“That the Government organ, the Advertiser, is hand in glove with the perpetrator of the “Piracy” hoax, published in the S. F. Alta, is made apparent by the fact that a stereotype of the article was received at that office per Alameda, and from which the ‘extra’ was printed. Some hoax, more costly, will probably be now played by the ‘four Jacks’ in the cabinet.)

“2. Criticism never attacks the individual, but only his work. In every case the attack is on a man’s acts, or on some thing, and not upon the man himself. A true critic never indulges in personalities.

“3. True criticism never imputes or insinuates dishonorable motives, unless justice requires it, and then only oa the clearest proof.

“The critic never takes advantage of the occasion to gratify private malice, or to attain any other object beyond the fair discussion of matters of public interest, and the judicious guidance of public taste.”

Notwithstanding the snarl of jealousy of our antiquated neighbor, it is the intention of the proprietors of the Advertiser to repeat the enterprise shown by them on Tuesday last. No expense will be spared to furnish the most interesting news within an hour of each steamer’s arrival. By the S. S. Zealandia, we expect something special that will afford further criticism for our out-of-date, old-time-custom, weekly contemporary.

[I have not found the actual special issue of the PCA printed on 12/23/1884, soon after the arrival of the Alameda from San Francisco. It might not be on the microfilm, and there may not be an extant copy of it because it was not a regular issue. But stereotypes… new technology arrives in Hawaii!]

Another example of the “P. C. Advertiser’s” moral attitude appears int the announcement, that a hula given by the Hon. J. A. Cummins at his resident at Waimanalo was a glorious affair.—We have no doubt, that the display was exceptionally fine, since the ex-Premier has a well earned reputation as a connoiseur in that line, and is said to use the collection of females, formerly of boat house fame, second to none in the country.—Still there is something about the hula, that has so far excluded it from the programs of church festivals and school exercises.—It has never been recommended to lure the mind to thoughts of higher and better things or to produce rigid uprightness of morals.

The hula is a graceful and rhythmic representation of certain actions of the human animal. There is no doubt, that from the earliest ages the physiology of reproduction has been the most intrinsically interesting known to man. After the question of food and personal safety, it is the most important consideration in the lives of man, savage and civilized. The Hindoos and Budhists covered their temples and public buildings with indecent pictures, which in some instances took the form of a cross. This was imported to Rome together with the worship of Isis. So every spire on a Christian Church represents a resurrection of the flesh. But civilized society has decided for good reason to cover Isis with a vail and put Osiris in a straight-jacket. It is only those, who believe in the infallibility and prerogatives derived from gold—as some of our friends—who may wish to go back to the first principles and have the hula taught as an accomplishment in our public schools, so that it might prove more attractive in catching a husband and certainly in domesticating him when caught, than the art of piano playing or embroidery. There are great posibilities in the hula! But at present it is prohibited by the law, and we are sorry to see the law violated by those who ought to know better.

We saw in the Advertiser newspaper of this Friday morning, of a mysterious woman in white attire that was seen on last Tuesday night; and this is what the newspaper says,

Being that some ladies do not believe in ghosts [akua lapu], nonetheless there are some well-known ladies here in Honolulu who said, that they saw something astonishing on Tuesday night.

The ladies were headed home on a hackney [kaapio] at 12, Tuesday night, and when they were very near to the house, with the horse travelling slowly, they saw before them on the street, a woman dressed in white. The body came near the car. At which point the women told her to get away; there was not the slightest sound heard from the mouth of the woman clad in white, but she jumped into the sky up above the back of the horse and came down on the other side. The driver then whipped the horse and sped off. It was a ghost or an actual person; it is a very mysterious thing to explain.

Sir:—The readers of the daily Advertiser of the 10th inst. were treated to one of the most unmitigated pieces of newspaper rot that I have ever been privileged to read. The crowning feature of the article is in the fact that it is false from the first to the last sentence.

While attending to my work I observed employees of the public works department removing two defective mirrors which needed slight repairing. He asked me if I knew of any other defected mirror frames. We investigated, and finding none, Mr. Cole then left the building. On returning to my work I saw a stranger approaching, who made some inquiries about the building, which I answered to the best of my ability.

This is the true story of the “Curio Seekers” trying to rifle the capitol building.

[Here is an interesting response from the “Roland Green” of the previous articles.] 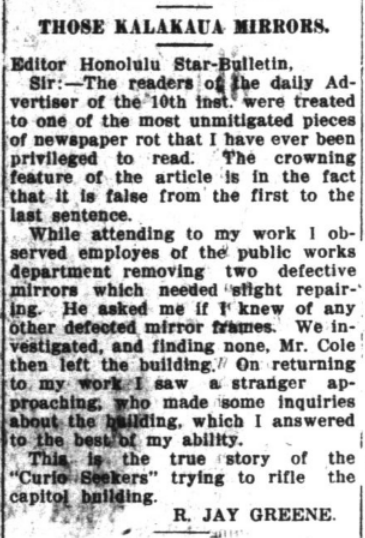 Comparison of New Zealand and Hawaii, the Hawaiian People and the Maori.

In the English morning newspaper [Pacific Commercial Advertiser] of the 17th of June, that mouthpiece published a clarification between the island of New Zealand and Hawaii, the population of the Maori lahui living today and that of the Hawaiian lahui.

However, the Maori have 500,000 heads of sheep, 60,000 heads of cattle, and 50,000 heads of horses. In Hawaii nei, the job of raising livestock is left to the other ethnicities, and the Hawaiians themselves, they raise a few chickens and a couple or three pigs.

In comparing these islands, New Zealand is fifteen times as big as Hawaii nei, but the total Hawaiians are more than the Maori per square miles; the comparisons put forth by the English paper are correct, all but what was said about our few chickens and pigs.

¹The kolea is the migrating plover, that is used to symbolize people who come to Hawaii, and like these birds, feed off of the riches only to leave after getting fat.

[I will have to check on who the writer was. Too bad the Advertiser is not online!]

Great Seal of the Republic of Hawaii.

In today’s P. C. Advertiser (February 25), a picture of the Great Seal of the Republic of Hawaii was printed.

By our understanding of that image, there is no way that those who established this Republic can erase or end or eradicate visages of the Monarchy and its accomplishments, from the seal mentioned above.

They stated and vowed that there will be no way that the reestablishment of the Kingdom of Hawaii nei will be allowed. However, when they set out to create a Seal for their Government. And now, that foolish idea of the plunderers and thugs has gone awry.

Being that, (1.) On that Great Seal, is the foundation of the first Seal of the Monarchy of Hawaii nei. (2.) There is the stripes of the Hawaiian Flag of the Monarchy. (3.) There stand puloulou, a symbol of the Hawaiian Monarchy of old. (4.) There is an image of Kamehameha I., the King who unified the Hawaiian Archipelago into one Nation. (5.) There are the words—”Ua Mau ke Ea o ka Aina i ka Pono” affixed onto this new Seal, the words given by King Kamehameha III after the restoration of the Independence of Hawaii nei by Great Britain.

All these things were from the Great Seal of the Monarchy of Hawaii nei (except Kamehameha I.)

Their intense desire is to rub out, to stomp out, and to end for all time, things of the Monarchy of Hawaii nei, lest vestiges of that sort remain in Hawaii; but that is not possible: there is no erasing, nor putting end to deeds done by the past Monarchs of Hawaii.

We know the story of the Phoenix, but it is not the same as the explanatory speech by P. C. Jones at the Armory [Hale Paikaukoa] in the year 1893, and these are his words:

“Once, Mrs. Kinau Wilder [Waila] went to where Ostrich were raised near Diamond Head [Laeahi]. One of the birds of the French Doctor Trousseau laid an egg, and it was on that occasion given to Kinau, and the egg was called Kinau. However, it was left there to be sat on by a bird until it hatched.

“This is similar to this Republic,” according to Jones. “It was born like that egg, Kinau.”

There is one unfortunate thing about that egg called by the name of Kinau, that being, it was a rotten egg [huaelo]. There was no chick born from that egg.

Jones didn’t know of the outcome of that egg, for it was but a yolk-less egg [hua makani], a hua laalaau?, a worthless egg.

Perhaps this will be the outcome of the Republic to which he compares it to? But at any rate, that is the kind of Ostrich egg that Kinau chose.

The shell of that astonishing egg is kept at the residence of Trousseau [Kauka Farani] in Makiki.

This astonishing Ostrich is not the same as a Phoenix which rises from the ashes.