Ke Alaula:—Aloha to you:—Here we are on the shores of the island called Nipona,* the large island of the archipelago of Japan. We left San Francisco on the first day of February and on the 26th, we landed here at Yokohama, Japan. We stayed there for three days and met with the American missionaries who live there. Then we boarded a steam coaster and travelled for two nights and landed at the port of Kōbe. Kōbe is on the south side of Nipona, in the space between Nipona and Kyūshū.

The two of us spent two weeks with the American missionary who arrived here earlier. Currently we are renting a house, and perhaps this is where we will stay permanently. There are about 300 haole from abroad living here, but most of them are unbelievers.

We started to learn Japanese, and know some words. Here are some of them, ino [imo] is potato; kome is rice; maki is firewood; tora [tori] is chicken; hiru go hau [hiru gohan] is lunch.

The Rulers and all people of the land are idol worshipers. There are perhaps forty people who have followed after the teachings of the American missionaries, listening to and worshiping Jehovah. There are maybe twenty million or more people in total in this land.

There are two types of idolatry here. The first one is Buddhism. This religion was spread from India until it reached Japan. The second type is called Sinetu [Shintō]. The religious buildings for both of these religions are built in serene places on hills, in beautiful valleys and sheltered forests.

*This seems to be a misunderstanding, whereas “Nippon” is the name for Japan as a whole, and the island that Gulick speaks of is named Honshū.

“HEIAU.”—We heard this word associated with the luakini [church] of Kawaiahao. It did not come from an “enemy,” but a friend called it that in public. But this is what we say: that word is associated with idol worship of the old days; it is not changed into a name referring to the truly sanctified places by this generation now living. The name luakini, that is what is transformed for the Christian religion by our fathers. Therefore, O Friends, do not call the house of God, a heiau. 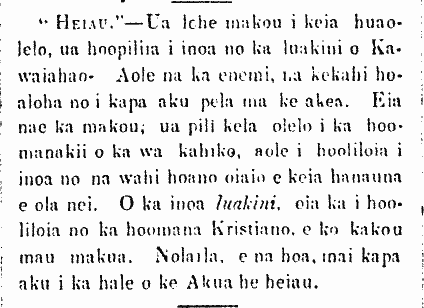