PRESENTATION MEDAL OF KALAKAUA TO KAMAKAIA.

The silver medal of King Kalakaua [Royal Order of Kalakaua] presented to Samuel Kamakaia, one of the members of the Bana Hawaii [Royal Hawaiian Band] is now in the possession of Malulani Beckley Kahea, who is also a band member; it is his to care for until the time comes for it to go to another member of the band, although according to Kamakaia’s wishes, it should be returned to the Bishop Museum.

Rightfully, this medal will be given to James K. Pohina, to oldest member of the Bana Hawaii active today. In 1883, this medal was awarded to Kamakaia, a gift from the King for his work as the leader of the band. In 1869, Kamakaia joined the band, and two years ago he left.

PAPER LEI ARE MUCH SOUGHT AFTER IN NEW YORK.

At the return of the head manager of the clothiers, Sachs, which stands at the corner of Fort and King Streets; [he said,] “Luau and paper lei have become popular with New Yorkers, and Hawaiian foods and lei are seen at parties given by many people on the banks of the Hudson River.

Supposedly at three places that haole went to visit, he saw people holding luau parties, and the only thing missing at those places was poi, salmon, tomatoes, onions and some other foods seen at luau in Hawaii nei.

One day when he went to go see one of his friends in New York, shown before him was an ilima lei and a lauhala hat upon which was a ribbon which read “Aloha,” and he said that they were a gift from Jim McCandless, as a memento. 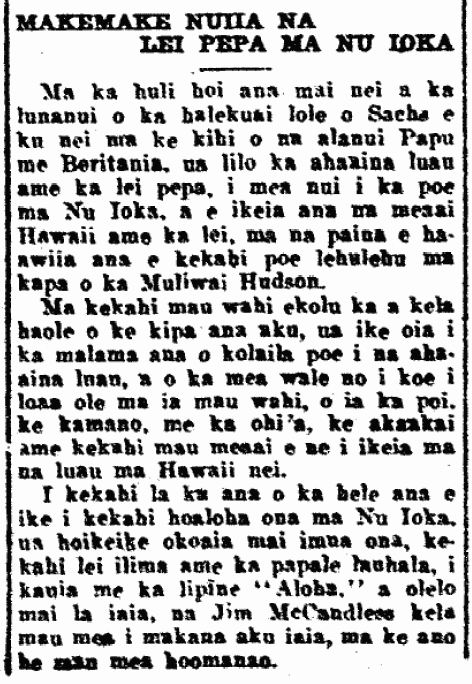