Honolulu, Aug. 10—The government has set aside the home lots at Puoina [Punchbowl] to be auctioned off. The prices have gone much higher than their value. What is so sad is that some homes which have been lived in by people for a long time will go to those who have a lot of money.

When these people who have homesteaded on these lands for many years in the past learned that their homes will go to the rich, some sat down in chairs and cried in despair over all the long years spent saving. How sad for those people who will lose their homes!

This is one of the things that Representative Kuhio opposes in the administering of the government by Governor Frear, that being the putting up for open auction lands suitable for Homesteads. It is clear that the poor will be crushed by the wealthy. Listen, oh you poor people, think carefully about your Representative of Honolulu, and choose a Representative who supports Kuhio, the one who is fighting for the rights of the poor Homesteaders [na poe Home Hookuonoono].

[The newspaper in which this article appears, “Ka Hoku o Hawaii,” is only available online from the middle of 1917. Although ulukau.org received funding many years ago to digitize all Hawaiian-Language Newspapers, many inexplicably fell through the crack. All the twelve prior years (which includes the issue from which this article was taken) can at this stage only be seen on microfilm…]

http://www.nupepa-hawaii.com is the easiest way to select a single post (article) to repost on Facebook or Twitter, or to email to a friend, or to simply print out!

On the bottom will appear buttons that will allow you to repost it on WordPress, Twitter, and Facebook. The next button will make it easy to email that post to someone you think might be interested. And clicking on the next button will let you print it out.

Below that is a space where you can leave comments and questions!

Helpful Buttons and Space to Leave Comments and Questions

http://www.nupepa-hawaii.com is the easiest way to browse through past posts by Calendar Date.

The next items on the right-hand bar are two ways to browse through posts by Calendar Date. 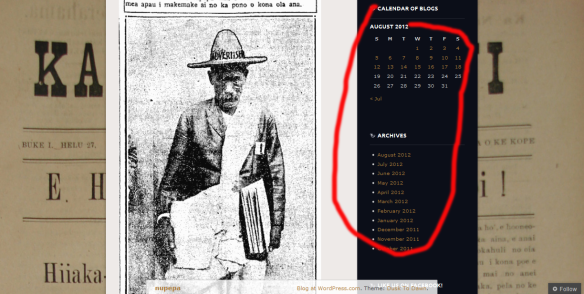 Calendar of Blogs and Archives