Instrument is sought after.—Eleio, Hawaii is putting effort into raising money to purchase a melodeon [melodiana] for its church house. If they should obtain one, then it will be Jane Loeau who will play it. An English school is also being taught by her there. It is hoped that her education effort for her dark-skinned [iliulaula] race will progress 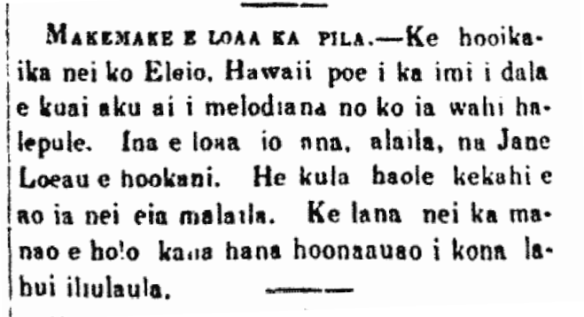 Is a beautiful little fish, like the gold fish in form and hue, and now on a visit to our shores, and is attracting the attention of all the native islanders. It only pays occasional visits, at irregular periods, and Hawaiian superstition disaster, usually the demise of a chief of the land. The impressionable kanakas are a little excited over this marine stranger; and in talking about it, they use the expression, weliweli, meaning fearful or startling; and well they may use such expression, in view of the numbers, the schools, the myriads of the alalauwa that literally thicken the water of our harbor.

We went out in a boat with a party, on Friday night to angle for a few. The moon was gorgeous in the heavens, and lined the gently rippled surface of the sea, with silvery pathways; and by her soft effulgence, we beheld the hosts of eager people, with pole and line in hand, that crowded along the edge of wharf and shore, and who in their varied attitudes formed beautiful silhouetts on the sweet calm evening sky.

The pretty little golden and silver tinted carps swarmed around us, and were eager to devour whatever was thrown to them. As quick as the hook and bait could be cast into the water they would bite and be hauled in. Perhaps two thousand busy hands were holding rods and lines over the stream; and along the whole line of wharf and shore, near which we moored our boat, we could observe the numerous burthened hooks, lifting the little captives into the air, and the shimmer of their bright scales, as they danced in the moonlight, pendant on the line, made them seem like a long line of fire flies hovering over the shore.

There were at least two thousand people out with hook and line that night. Some said three thousand, lined the wharves of the harbor and as each caught with unvarying success, it might not be much out of the way to say that the night’s catch was equal to one hundred thousand fishes. But they are mostly very small, varying from an ounce or two in weight, to perhaps half a pound. They make very palatable fry, and what the natives cannot eat fresh, they salt for future use. The arrival of the alalauwa affords great diversion to the natives, but probably affects the meat and fish market a trifle. The superstition about its arrival is spoken of with a great deal of earnestness: and even foreigners like to tell, as confirmatory of the native superstition, how this fish arrived when “the princess” died, and on other occasions. In fact the foreigner is inclined to be just as superstitious as the native, and none of us could get along very well without our credulity. Very likely the alalauwa has slipped into these waters many a time, when no chief died, but it is enough to support our faith to know that they came at times when somebody did die. Some want to satisfy the national credulity at this time without waiting for any especial victim, by saying that the death of the chiefess Jane Loeau accounts for the event; but that won’t do; as the arrival of the fish was not officially announced by anybody on the day of her demise. Some of the kanakas said, as we sat quietly and patiently angling for fish and ideas, that the arrival of the alalauwa forbode the loss of Puuloa,¹ but a more numerous party said no; it was a warning to the parricides, who would try to sell a portion of their native country.