We are publishing Article 101 of the Constitution of the Republic of Hawaii, so that the Lahui may understand it, and so that the Jurors for the upcoming August Session see it, that being this:

Article 101:—No person shall be eligible to be an Officer, Senator or Representative under the Republic, or an Elector of Senators or Representatives, or a Juror, until he shall have taken and subscribed the following oath or affirmation, viz: END_OF_DOCUMENT_TOKEN_TO_BE_REPLACED

On July 4, 1894 the Republic of Hawaiʻi was proclaimed by the provisional government that usurped Queen Liliʻuokalani. END_OF_DOCUMENT_TOKEN_TO_BE_REPLACED

The noticable lack of enthusiasm at the Royalist mass meeting yesterday afternoon was not surprising. The half-dozen foreigners who got up the affair, to protest against the Republic, will now probably admit it is a hard matter to work up native enthusiasm at a political funeral. 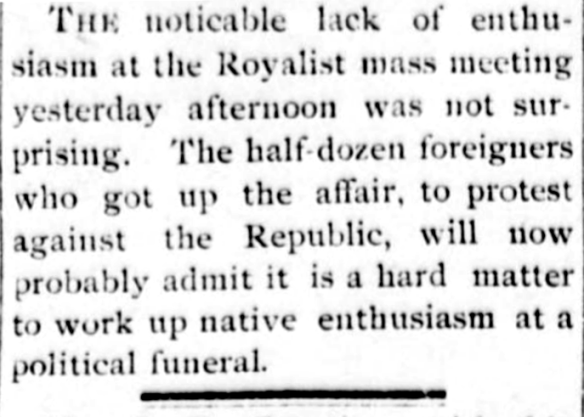 Those who have hung a last hope on a turn in the political tide favorable to royalism have again been disappointed. The eager anticipation that the new constitution would not receive the support of the radical element of the political clubs has been dashed by the unanimity and enthusiasm with which the call for to-night’s ratification meeting has been received. Hope deferred hath surely made the heart of the royalist politician heavy; and that “terrible tired feeling” has, since the passage of the Senate resolution, characterized the actions and scheming of the ex-queen’s street politicians. They have not learned of wisdom, though tutored thus far by a kind fate; and they refuse to abate one jot of their absurd pretentions, though a point has been reached where the royalist faith-cure and racial egotism will avail no more forever.

The crowning absurdity of all the royalist planning since the overthrow of the monarchy, has been reached in the mass meeting “to protest” against the establishment of the Republic and the new constitution. Wiser heads have already entered similar protests—protests with somewhat of weight and prestige back of them, made both here and abroad; but they have amounted to naught, not being more substantial under the circumstances than the breath with which they were projected.

It has been certainly an untoward fate that has snapped off the daily yearnings of retrogression and restoration almost as soon as they have been made public through diplomatic or local channels. It seem not yet to have dawned upon the monarchists and their more influential backers of different sorts and conditions that the royalist leaders are failing to play political trumps because the people of Hawaii have refused to deal them the necessary cards. The present, in fact, is a clear case of “new deal” where “bluffs” do not count.

It is pretty safe to say the Royalist mass meeting announced for this afternoon at 5 o’clock is another little game of political bluff gotten up by the usual coterie of anti-Republicans to give color to some little scheme of their own. Or it may be that this time the many desertions an general tendency of the natives during the past two weeks to come over to the Republic and the cause of Annexation has so chilled the political atmosphere that the half dozen foreigners from everywhere, who have been misleading and misadvising the natives for the past year, feel the absolute necessity of an immediate display of vocal fireworks to sustain their fading influence with the natives yet a little longer.

The public will remember the little mass meeting dodge of Mr. C. W. Ashford and other men of the stripe some months ago, when several hundred Chinese were present on special invitation to make a respectable showing. The meeting, however, as far as representing anything or anybody, except the three or four anti-American speakers on the stand, was an unqualified fizzle. Such will be the unlamented fate of the alleged mass meeting this afternoon to protest against the establishing of the Republic of Hawaii. This time the royalist braves will not even have the countenance of the Chinese who have sense enough to see the destinies of Hawaii are pointing elsewhere.