THE RESTORATION OF THE KINGDOM.

How great are the blessings of Kamehameha III and his subjects now, for the difficulties have subsided and the sovereignty of the land has been restored. No more is the living as subjects under the men of Victoria.

Kamehameha III is now the monarch of Hawaii nei. The British flag has been taken down on this day, July 31, 1843, and Hawaii’s flag has been raised once more. Therefore, this will be the day of the year that will be commemorated with joy from here forth.

Here is an awesome event that happened today. At half past eight, Admiral Thomas went along with some sailors, from the three British ships (anchored at Honolulu now) to the fort of Honolulu at Kulaokahua, with large and small firearms, and spears, and there he awaited the king. At 10 o’clock, the king went with his soldiers, and arrived; the Hawaiian flag was unfurled, the British flag was taken down from the fort, and there the Hawaiian flag was raised, and so too in uplands, on the hill of Puawaina [Punchbowl]; many guns were shot off in salute all over: The soldiers did it, the warships as well, the forts as well, and the hill of Puawaina as well, and the whaling ships as well; and the bells were rung. The warships were festooned with flags; it was a fine and beautiful sight to see.

There were many people gathered to witness this amazing event, perhaps there were ten thousand in total. The soldiers carried out their duties well; they circled the king twice, while saluting him; they shot off their guns many times and marched here and there quickly and smartly. And when they were done, the crowd all returned to town. 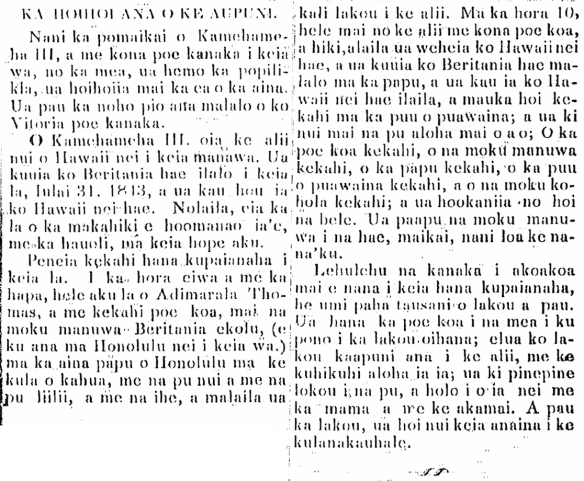