[This once again is an example of the text available for you to search at papakilodatabase.com for the Vital Statistics Column in the Kuokoa for January 3, 1863. I don’t know about you, but this just makes me sad.

If only the newspapers were reshot first so that there were clear images to start off with, at least the resulting OCR output could have been better.]

[The one name here most everyone will recognize is the renown historian, Samuel Manaiakalani Kamakau and his wife, Sarah Hainakolo.] 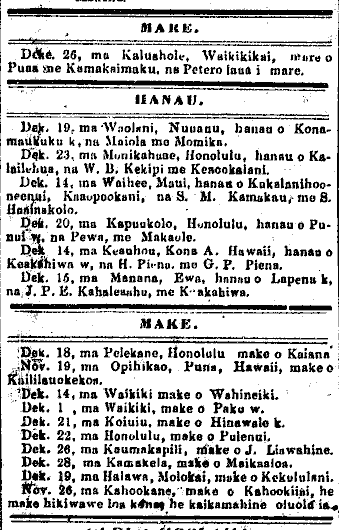 ¹I could not find an ailment called “kumu”. 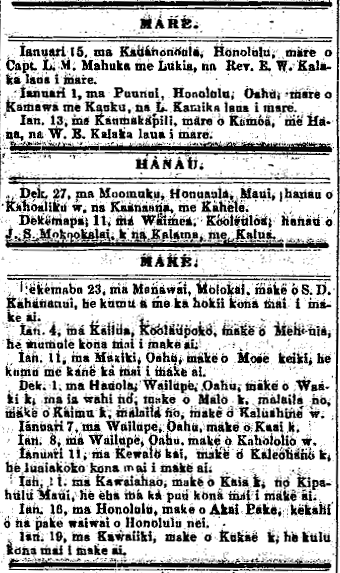 [The above is what the text looks like on the Papakilo Database for the same Vital Statistics Column that appeared in the last post. The following disclaimer precedes the text:

Optical Character Recognition, or OCR, is a process by which software reads a page image and translates it into a text file by recognising the shapes of the letters (The NINCH Guide to Good Practice in the Digital Representation and Management of Cultural Heritage Materials).

OCR enables searching of large quantities of full-text data, but it is never 100% accurate. The level of accuracy depends on the print quality of the original issue, its condition at the time of microfilming, the level of detail captured by the microfilm scanner, and the quality of the OCR software. Issues with poor quality paper, small print, mixed fonts, multiple column layouts, or damaged pages may have poor OCR accuracy.

The searchable text and titles in this collection have been automatically generated using OCR software. They have not been manually reviewed or corrected.

To look at the OCR text, select the page/article and click the “Text of this page/Text of this article” link.

Where does that leave you when you are searching for your kupuna or any historical event? This is precisely why the Hawaiian-Language Newspapers need to be reshot as clearly as possible now before they crumble away.]

[Back a 150 years ago, the Vital Statistics Column was a bit more detailed. Here again we see that the digital image is not terribly clear. Hopefully one day soon the newspapers will be reshot clearly so that better transcriptions can be done for more accurate searches, not only for genealogy links, but for anything that happened in the past!]