THE QUEEN AT WAIALUA.

Her Majesty’s Gift to Liliuokalani Church.

Her Majesty the Queen returned from her New Year’s trip to Waialua by yesterday afternoon’s train from Manana. The Queen and party greatly enjoyed their short stay at Waialua. There was no function given at the place except the presentation of a clock to Liliuokalani Church by the Queen, after whom the new church was called at dedication. END_OF_DOCUMENT_TOKEN_TO_BE_REPLACED

THE QUEEN IN THE SEA SPRAY OF PUAENA.

The Alii, the Queen spent her New Year’s day at Waialua, and on that day was held an assembly where the Queen handed over her gift of the hanging clock to the Waialua church named after her, the words of presentation were given from the Queen’s side by her Chamberlain, Robertson, and this was responded to by Judge S. H. Kalamakee from the side of the church END_OF_DOCUMENT_TOKEN_TO_BE_REPLACED

On the evening of the 5th of this December, in the Episcopalian Church [St. Andrew’s Cathedral] at Honolulu, joined in marriage by the Rev. A. Mackintosh were Mr. Herbert Garstin and Miss Maud Knudsen, the daughter of Mr. and Mrs. Valdemar Knudsen of Kauai. The Alii, the Queen graced this marriage gathering, accompanied by the Governor and the Chamberlain, and a lady-in-waiting. On the next steamship to California, the couple will return to California, the place they wish to make their home, where they will spend their future days. 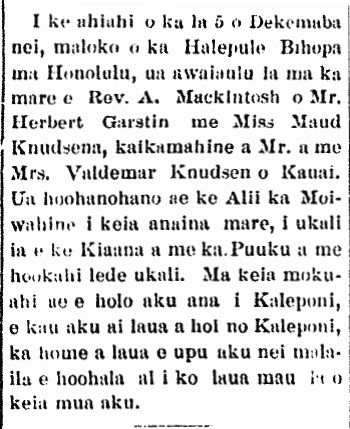 THERE ARE MANY OLD THINGS PLACED ON DISPLAY.

There are many old things from the monarchial period saved as memorabilia on display in the window of the business of Hawaiian News Co., which is headed by John H. Soper, the first General of the Hawaiian National Guards [Pualikoa Kiai Lahui Hawaii]; and amongst the old things is the sword of King Kalakaua, memorabilia from the P. G. [Provisional Government; aupuni kuikawa], and many various documents.

There also is a ticket signed by G. E. Smithies of the treasury office, for the receipt of the crown and sword of Kalakaua and many other items within Iolani Palace at the time, and now the Executive Building [Hale Mana Hooko].

Near the sword is a written document, explaining that it was presented to Colonel Soper (that being Soper’s rank at the time) from James W. Robertson, the first chamberlain of the King, by order of Sanford B. Dole, and it was written on the 18th of January, 1893, the day after Queen Liliuokalani was driven from the throne.

There are also proclamations signed by President Dole and the ministers of the P. G. giving authority to John H. Soper, the one who was appointed as marshal of the republic of Hawaii, to proclaim martial law. There are also several documents sent to Marshal Soper from President Dole ordering Soper to circulate the proclamations should the troops of the Provisional Government be waged war upon.

There is also an order giving authority to Marshal Soper to arrest some men here in Honolulu, should they defy the government. In the list of names of those people are: Charles J. McCarthy, former mayor of Hawaii; also C. B. Wilson, marshal of the kingdom under Queen Liliuokalani; Samuel Parker and some other former ministers; along with other important people of the time amongst the Hawaiians.

Also in the window is a portrait painted of President Dole and also of General Soper in full dress, in the role of General of the Republic of Hawaii; and so too with other important people during the time of the overthrow of 1893.

All of the appointment documents of General Soper as a marshal [ilamuku] for the kingdom signed by King Kalakaua from 1884 to 1886, and also the appointment as marshal by President Dole for the republic of Hawaii, and the appointments as colonel and brigadier general for the National Guards, can all be seen in the window.

[Speaking of treasures and swords and auctions… Why is this sword up for auction?]