Under the auspices of

The Daughters of Hawaii

A cordial invitation is extended to the public to be present at this celebration. 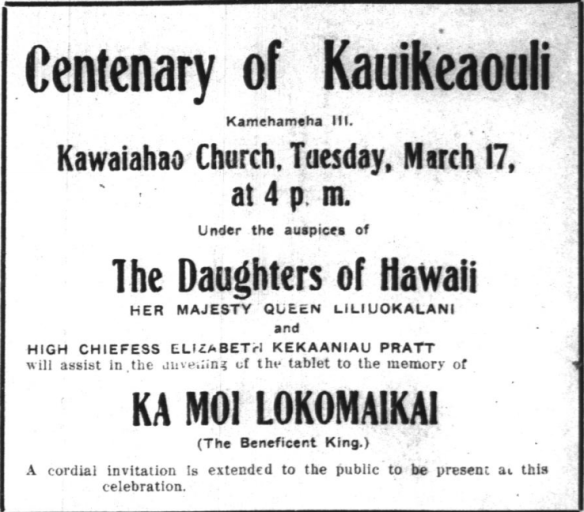 TRIBUTE PAID TO MEMORY OF KING

The centenary of Kauikeaouli, Kamehameha III, was celebrated yesterday at Kawaiahao Church under the auspices of the Daughters of Hawaii. This old church, that has witnessed so many of the royal ceremonials of the Hawaiian people, was taxed to the utmost of its seating capacity. More than twenty-six hundred persons viewed the unveilling of the memorial tablet which had been prepared by the Daughters of Hawaii to mark the birthplace of “The Generous King” at Keauhou, in Kai-malino, Hawaii.

The tablet was hidden from view by the Royal Standard of Liliuokalani and a Hawaiian flag, both the property of and loaned by Hawaii’s venerable ex-queen for the sacred ceremonial.

The Queen and High Chiefess Elizabeth Kekaaniau Pratt, both of whom are lineal descendants of Keawe, the ancient king of Hawaii, and founder of the Kamehameha dynasty, were seated on either side of the memorial stone in the nave of the church. The palace chairs in which they sat were draped with ancient Hawaiian feather capes of priceless value.

Back of the Queen and High Chiefess Pratt were High Chiefs Beckley and Hoapili, clad in the ceremonial feather cloaks and helmets of the Royal Courtiers. High Chief Fred Kahapula Beckley, the spear-bearer, is a direct descendant through his father’s side from Kameeiamoku. High Chief Albert Kalaninoanoa Hoapili, the kahili bearer, is a lineal descendant of Kamanawa, the royal kahili bearer. These two therefore, in yesterday’s ceremony represented the spear-bearer and kahili bearer who are shown on the Hawaiian coat of arms and are descendants of the two chief court alii of Kamehameha I.

On either side of the royal court representatives were the kahili bearers in ordinary, sixteen young men from the Kamehameha School for Boys, robed in feather capes and the costumes of the warrior of old, representative of the court attendants.

The chancel and pulpit were tastefully decorated with beautiful ferns and palms while above was the Royal Standard of Kalakaua and the Hawaiian flags, both now the property of and loaned by the Kapiolani Estate.

END_OF_DOCUMENT_TOKEN_TO_BE_REPLACED

See Maile’s Meanderings on Kona Historical Society’s page for more on the 1914 celebration of Kamehameha III’s 100th birthday, along with pictures!