Those magical haole that were always performing at the Savoy were banned by Sheriff Jarrett, because they are always seen making children sleep on a bed for forty-eight hours.

Packed to the Doors Last Night.

If You Want to Laugh, Don’t Miss It.

Here are the astonishing haole showing their amazing feats at the Savoy. On the night of this past Monday, the young boy by the name of Moses Kaawa [Kawaa] was put to sleep, and he is on display in one of the windows of the furniture store of Hopp [Hapa] for two days, and on the night of this past Wednesday, he was awakened from his sleep after sleeping for forty-eight hours. This coming week, someone will be put to sleep and buried in the ground with some space for him to breathe. This theater is always filled with spectators!

Kawaa, father of S. W. Mosis, who at the present time lies asleep in J. Hopp & Co.’s window, is frightened of the effects that the long sleep may have on his son and asked this morning that Barnett should wake him up.

Barnett argued the point with him however, and refused to do anything of the kind stating that the boy was all right and that no harm would come to him. The father went away very dissatisfied with the whole business and Mosis will sleep on until tomorrow night when he will be brought back to life at the Savoy. 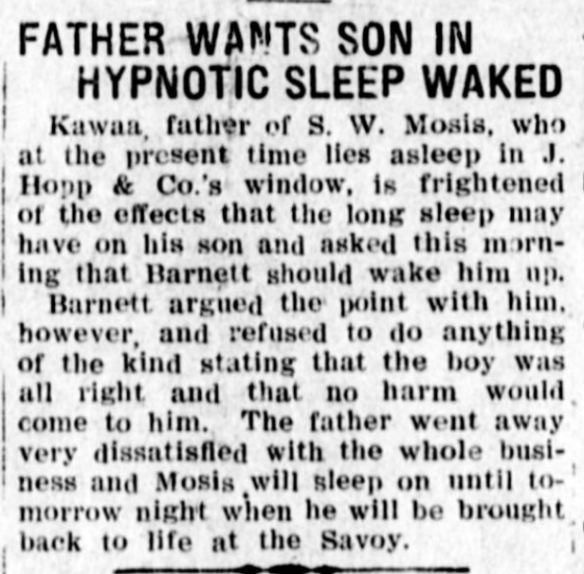 From the left to right: Joe Kama; Peter Corney; J. C. K. Hopkins, the leader; the haole to whom belongs the movies; and Moses Kawaa.

The picture above is of some Hawaiian boys travelling around some places in America, along with a movie company, using music to make a living in the unfamiliar lands.

When the Hawaiian boys left Hawaii nei, they did not imagine that they would be singing and playing music in America, but with the passing of time, they found themselves getting together with each other and started this job, getting paid well by the week.

This picture was sent by Peter Corney to his mother here and he also stated that he was in very good health as well as his friends, and that he believes that the day will come when he will become a singer.

This boy left Honolulu nei when some haole came with a steamship in search of workers for a salmon fishing outfit and he spent several months working under his supervisors, and when the salmon fishing season was over, he returned to San Francisco and there he ran into Moses Kawaa and with some other boys, and they planned to go around singing and playing music.

Many here in Honolulu have not forgotten Moses Kawaa, the Hawaiian boy who was made to sleep in the window of the Lewers & Cooke building for twenty-four hours, two years ago.

These boys work under a haole who shows movies, and the movies that he shows all over the place are of scenes of Hawaii, like shots of the crater of Kilauea, shots of surfers, the expansive sugarcane plantations, pineapple fields, and many, many scenes taken in Hawaii nei and sent to America.