PROMINENT among the leading lights at the dedication of the Punahou tank were the group pictured above. They are, from left to right, Duke P. Kahanamoku, Mrs. David Wark Griffiths, Oscar Henning, Duke’s manager; and Dad Center END_OF_DOCUMENT_TOKEN_TO_BE_REPLACED

SELECTED FILMS FOR THE SETTLEMENT

Messrs. C. G. Bockus, Gerrit Wilder and C. S. Crane, the committee named to select and purchase moving-picture film for the machine shortly to be taken to the Molokai Settlement, watched R. K. Bonine exhibit a mile or so of views and stunts submitted to them for sale. Mr. Bonine had put his machine and his skill at the service of the committee, and the tests of the various films were made in his studio. There were several persons to watch in addition to the committeemen, including Superintendent Jack McVeigh of the Settlement and A. Gartley, and the various pictures were criticized as to their particular merits for the desired use. END_OF_DOCUMENT_TOKEN_TO_BE_REPLACED

Genuine Hulas to Be Preserved In Series of Motion Pictures

Aid of modern motion pictures and phonographs will be enlisted to preserve the Hawaiian hula as it was danced in Kalakaua’s days, so that burlesque innovations will not cause the dance to degenerate in years to come, it was announced Monday when Akoni Mika, 68-year-old hula master, arrived here from his home at Keaukaha, Hilo. END_OF_DOCUMENT_TOKEN_TO_BE_REPLACED

THE 4 HORSEMEN of the APOCALYPSE

with a Six Piece Orchestra

playing the music which was written especially for this picture.

The Four Horsemen is considered to be the most wonderful photo-play ever filmed and the music will add materially to its enjoyment. DO NOT FAIL TO SEE THIS ATTRACTION

Thomas Meighan in “The Bachelor Daddy”

“MISTRESS OF THE WORLD

“NORTH OF THE RIO GRANDE”

“North of the Rio Grande”

Reserved Seats on Sale at the Lihue Store 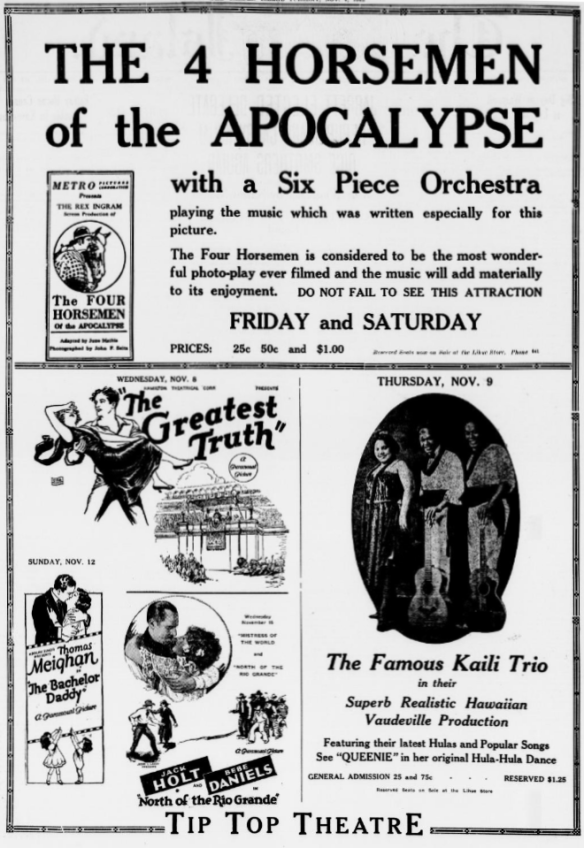 Because of the benevolence of the Board of Health [Papa Ola], by them taking up the building of a Movie and Entertainment House for the Patient Colony [Kahua Ma’i] here, we therefore revoke our Requests put out by us to the Fundraising Committees which were approved by us. As for the Committees that collected money for this endeavor, please send it to the Secretary of the Committee, Mr. Joseph Aiona, or to the Superintendent [Lunanui] of this Patient Colony, Mr. J. D. McVeigh.

By way of the Committee, the people of the Patient Colony send their boundless thanks to the Fundraising Committees [Komite Ohi Dala] for this work, and to all those who gave their donation. May God bless us all in the Name of Jesus, Amen.  JOSEPH AIONA,

Kahanamoku Asks to Go to the Land of the Haole

Duke Kahanamoku [Kuke Kahanamoku] submitted his request to the Board of Supervisors [Papa Lunakiai] to allow him to go with John Ford [Keoni Ford], a director [lunanui] of a movie company in Hollywood, to the land of the haole and to take a leave until the 7th of January of next year.

During his leave from his office, Charles H. Rose [Kale H. Rose] will take care of all of his duties.

Ilona Momilani, a baby girl was welcomed into the family of Mr. and Mrs. Folinga Faufata on March 10.

The baby’s father, a graduate of Kamehameha with the class of 1935, is now an engineer at a power plant in Pearl Harbor.

The Fafatas reside on Kaunaoa Street in Kapahulu. Barbara, the eldest daughter, attends the Kamehameha kindergarten.

The Saturday night activities for the student body on April 22, were calling and movies.

The senior division enjoyed dancing and a social gathering which began at 7:30 o’clock in the common room of Lunalilo hall.

Two color movies were shown to the junior division at the school for boys’ assembly hall.

“A Victory”, a picture filmed for the Junior Police Officers on the K.S.B. campus, featured Samuel Fontaine, brother of David Fontaine, low-eleventh student at K.S.B., and James Noa, a ninth grader at the school for boys.

In the second feature, “Make Way for Victory”, two boys of the Preparatory department, Kealoha Coleman and Kui Lee, had leading roles. There were also dances by the preparatory pupils directed by Mrs. Mary K. Pukui and Mrs. Lei Hapai.

These pictures were filmed in color by George Tahara, a student at the University of Hawaii. He has also made two previous showings to Kamehameha audiences. END_OF_DOCUMENT_TOKEN_TO_BE_REPLACED

Midday this past Monday, just as was announced some days ago, people crowded Hotel, Fort, King, and Bishop streets hoping to get their images in a movie of Honolulu which will be taken to the coming Panama-Pacific International Exposition in San Francisco.

These places were just full of people and cars, pushing each other in their hope to get into a good place to be filmed; but there were many who were disappointed because they stood on the side of that camera that had no lens. Some chased after from Hotel, Fort, King, until Bishop streets. END_OF_DOCUMENT_TOKEN_TO_BE_REPLACED

The astonishingly beautiful Theatre was just completed, and it was dedicated [hoau ia] in the evening of this past Monday, and a great crowd filled this very first opening.

A Hawaiian established this beautiful building here in Hilo, and it can accommodate 813 guests. It is divided up into various sections, and there are proper seats located everywhere, and the moviegoers at all times will sit in true comfort. END_OF_DOCUMENT_TOKEN_TO_BE_REPLACED

An attractive and unusual film of scenes from the Molokai settlement has been displayed to a party of friends by Robert K. Bonine, Honolulu photographer and pioneer in the exposition abroad of Hawaii through the moving picture, reports the Advertiser. Among those at the “first night” at Mr. Bonine’s studio in the Oregon building were Dr. A. L. Dean, president of the University of Hawaii, Frederick E. Trotter, president of the board of health, and Dr. G. A. Barton. END_OF_DOCUMENT_TOKEN_TO_BE_REPLACED