—On this past Sunday, some haole boys went to surf at the surf spot of Uo at noon of that day, and some people told the sheriff to arrest them; he responded that it was fine, and that there was no law against surfing on Sunday. We believe that if surfing is a pleasurable activity, then there is indeed a law against it.

PROMINENT among the leading lights at the dedication of the Punahou tank were the group pictured above. They are, from left to right, Duke P. Kahanamoku, Mrs. David Wark Griffiths, Oscar Henning, Duke’s manager; and Dad Center END_OF_DOCUMENT_TOKEN_TO_BE_REPLACED

HE MELE NO DUKE KAHANAMOKU

Boys who fought with a shark.

On Wednesday, that being the 20th of November, at 12 noon, two boys went to bathe in the sea at the surf spot, Uo, in Lahaina, they being M. Kekiakona and K. Kalunakanalima; and while they were bathing, there appeared a large Shark, three feet in length, and when they saw this Shark, one said to the other, [“]We will be finished by the Shark[“]; END_OF_DOCUMENT_TOKEN_TO_BE_REPLACED

The coral point of Kaipalaoa is filled with sand.—During the month of November past, and on into this month, that place was filled up with sand, and this was not so for many years in the past, according to the old-timers of Hilo nei. END_OF_DOCUMENT_TOKEN_TO_BE_REPLACED

Pertaining to the Queen.—Queen Emma has returned from her tour of Wailuku on this past Tuesday evening of May, and it was at 8 o’clock that she reached here in Lahaina. She was accompanied by the distinguished ones of the valley shade [ka malu hekuawa], and she returned with her attendants who went along, His Ex. P. Nahaolelua, Col. D. Kalakaua, Hon. P. Y. Kekuaokalani, Hon. A. M. Kahalewai and Mrs. Kalakaua.

Exhibit of paintings.—This past Thursday night, there was a great exhibit of illustrations at the School of the English Mission; there were many portraits shown that night, all of Hawaii’s Alii; and we admired all of the paintings, and they were done with skill; in attendance as well was the Queen.

A Party.—On the evening of Thursday, Reverend G. Mason held a party to honor the Queen, and those who were instructed, and everything carried out at the party was gracious, and the tables were laden with things of all sorts, and we ate until satiated, and a most was leftover. END_OF_DOCUMENT_TOKEN_TO_BE_REPLACED

Tomorrow, June 27, will be Mahealani, the 16th of the moon month Kaaona.

Mahealani is a good planting day. The Hawaiian farmer in ancient days who had a new field of potatoes would rise with the dawn to go into his garden and pray to Kanepuaa, the god of fertility. END_OF_DOCUMENT_TOKEN_TO_BE_REPLACED

SLED OF A CHIEFESS

On the 6th of last month, N. K. Pukui, traveling agent of the Hawaiian Realty and Maturity Co., while on a tour of the Island of Hawaii, found the above illustrated sled in a cave at Hookena, Hawaii.

It is said that the oldest kamaainas of Hookena have heard from their parents and grandparents that sometime in the reign of King Keawenuiaumi, about two hundred and fifty years ago, a high chiefess named Kaneamuna [Kaneamama] was the living at Hookena. Her principal amusement was hee holua (coasting on a sled) and hee nalu (surfing).

She had her people make a sliding ground for her on a hill just back of the little village of Hookena, and ordered a sled, or land toboggan, called a papa holua, as well as a surfing board, or a papa hee nalu. When the slide was finished she passed many pleasant hours sliding down the steep hill. This slide was composed of smooth stones covered with rushes. After her death her sled and surf board disappeared, and the secred of their hiding place was never revealed.

It is believed the sled and board found in the cave belonged to the High Chiefess. They are made of the wood of the bread-fruit tree and at the present time are in very good condition. The cocoanut fiber ropes are still attached to the sled.

Here are two young men from Honolulu considering going to Los Angeles with a canoe and surfboard to demonstrate the people Hawaii’s entertainment of canoe surfing and board surfing, should the Promotion Committee give their approval to pay for their travelling expenses. George Freeth and Dan Miller are the names of these boys. 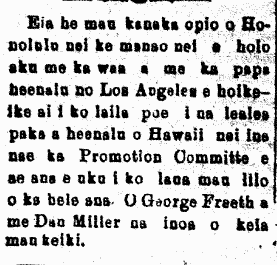