The Makaainana newspaper gave its readers the gift of a Calender for this year, prepared by Mr. J. Liwai Kukahi. He followed the organization of the names of the months by the reckoning of the Hale Naua, and so too with the days, they are according to the names of the nights. This is a good Calendar for farmers and fishermen amongst the Hawaiian lahui.

[This is something that I wish was still around for us to see. It is only rarely that you will find still one of these single sheet gifts from the newspaper. Probably because they got pinned to a wall for actual use. Has anyone seen a copy of this?

The only single sheet calendar gifted by a newspaper that I know of still existing is the 1906 Aloha Aina calendar.]

The King’s Birthday: Was It in Spring Instead of August?

The appearance in Hawaiian Holiday of an article on Kamehameha III two weeks ago revived interest among old timers in a question that in years gone by aroused both query and controversy.

The latter date until recent years this writer believed to be the correct one. It was known to have been observed during the king’s lifetime, with flag flying, celebrations and official calls.

Kauikeaouli, it must be remembered, was born in a period when time was reckoned by the unwritten Hawaiian calendar, one that was established, detailed and well arranged, but so different from the later-adopted haole calendar that it would not be strange if confusion sometimes occurred.

The August date was affirmed by Fornander, and appears in Alexander’s Brief History of the Hawaiian People. Hawaiian Holiday’s article was timed and written in acceptance of these statements, and its length being limited, did not include mention of the controversy.

In August, 1847, there appeared in the Hawaiian publication Elele Hawaii [10/6/1847, pp. 99–100] an article by G. S. Keliumiumi, vehemently and poetically protesting the celebration of the king’s birthday in March.

He quotes Keaweamahi as one authority, and says in part, “Know then by this document the correct and the truth of King Kamehameha being born on the 11th day of the month of Hinaiaeleele, which is August…

David Malo, in 1847, also disputed the March date, saying he was present at Keauhou when the king was born. “I did not know how to reckon months at that time,” he wrote, but he cited a fishing season and certain events that would mark the period.

Fornander, in a chronological table that appeared in Hitchcock’s English – Hawaiian dictionary, says for 1813: “Kauikeaouli, afterward Kamehameha III, was born on Aug. 11 to Kamehameha and Keopuolani. The day of his birth, however was in after years conventionally fixed for March 17, but the above date is the testimony of his nurse, Emilia Keaweamahi, wife of Kaieoewa [Kaikioewa], Governor of Kauai. (Kamakau mentions Kaikeoewa as the infant’s protector.)

And now for a surprise!

Very unexpectedly, the writer has been given permission to use and extract from the journal of no less a person than John Young:

“News came by bearer a few days hence of the birth of a child who will be declared kabu as an heir to this kingdom’s throne.

“Tamehameha is overjoyed. He declares a great feast and a number of sacrifices, and a time of great celebration.

“Mother and I go to celebrate. Grace is ill today. Fanny, John, James and the kahus shall go with me.”

As this journal probably has never seen publication, it may be that our story represents a scoop on a human interest item 145 years old, a journalistic triumph for a historian.

In any case, let’s hope March 17, 1959, will be duly celebrated. Twice within the span of a year is not too often to remember the good king.

The new year is almost upon us, and just as we have for the  past few years, nupepa-hawaii.com is sending you a calendar fashioned after the original one put out by the Aloha Aina newspaper in 1906. Feel free to print it out for yourself or to share it with friends. To download the PDF file from which you can print, simply click on the image below.

The new year is almost upon us, and once again nupepa-hawaii.com is sending you a calendar fashioned after the original one put out by the Aloha Aina newspaper 112 years ago. Feel free to print them out for yourself or to share it with friends. To get to the PDF image which you can download and print from, simply click on the image below.

[Found under: “LOCAL AND GENERAL NEWS”]

The Ka Ahailono o Hawaii has issued an Alamanach for 1898 which is adorned with the pictures of the Hawaiian anti-annexation commission now in Washington.

[This is just another thing I wish I could see. As of today, there are no extant copies found of Ahailono o Hawaii (which first appeared on 6/7/1897). Maybe one of these days, someone will come across some. Please be on the look out.]

Tomorrow, June 27, will be Mahealani, the 16th of the moon month Kaaona.

Mahealani is a good planting day. The Hawaiian farmer in ancient days who had a new field of potatoes would rise with the dawn to go into his garden and pray to Kanepuaa, the god of fertility. END_OF_DOCUMENT_TOKEN_TO_BE_REPLACED

Here is the 2017 nupepa-hawaii.com calendar fashioned after the one given away 111 years ago by Ke Aloha Aina newspaper in 1906! Feel free to print it out for yourself or to share it with friends. To get to the PDF image (from which you can download and print), simply click on the image below:

Calendars were given out by the newspapers throughout the years. Imagine what this one looked like. It was given to subscribers by the Loea Kalaiaina in 1898.

Here is the 2016 nupepa-hawaii.com calendar fashioned after the one given away a 110 years ago by Ke Aloha Aina newspaper in 1906! Feel free to print it out for yourself or to share it with friends. To get to the PDF image (from which you can print or download), simply click on the image below: 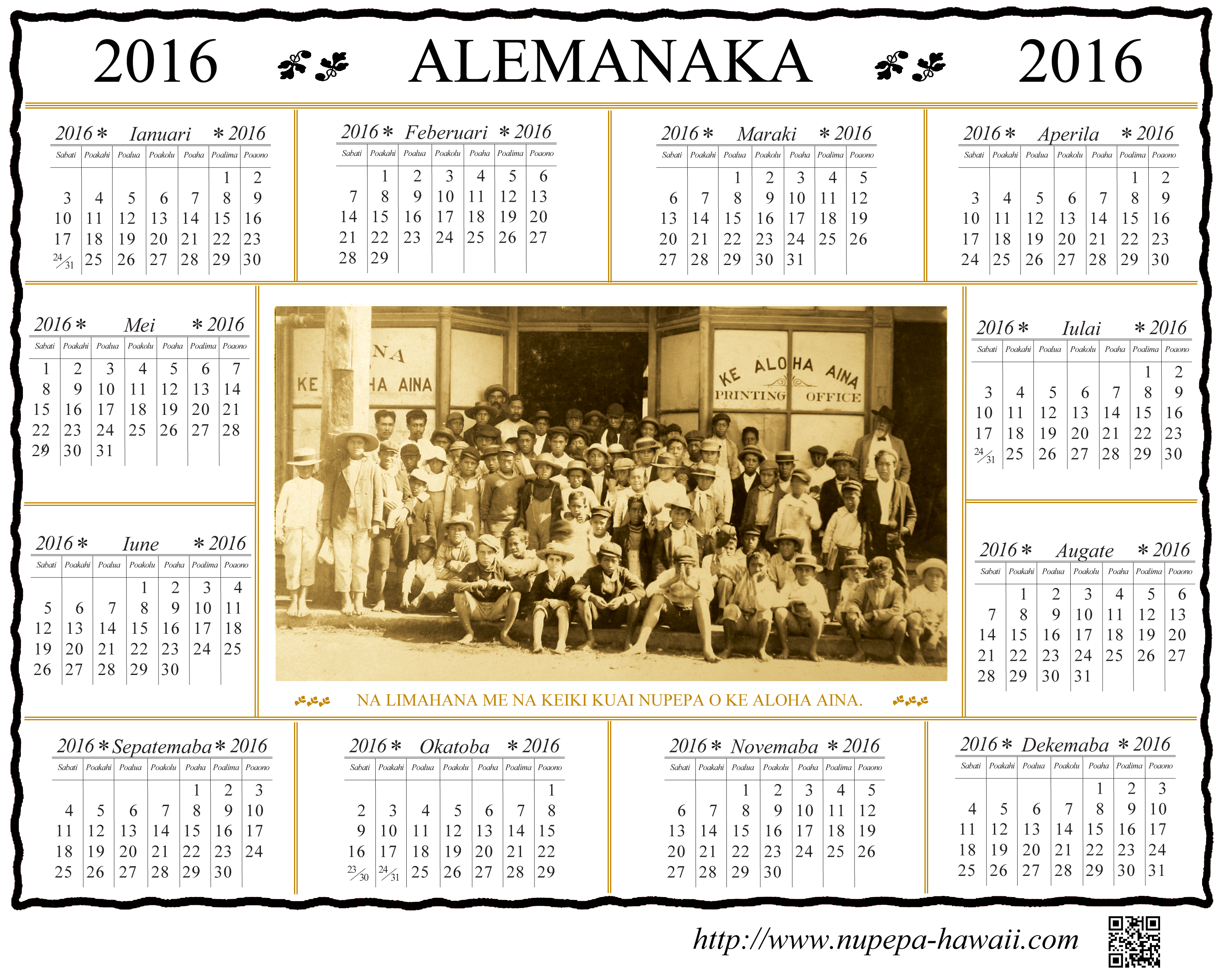 See you all again in January. Let’s all have a hauʻoli makahiki hou!!

Here is a small makana to everyone who checks in on this blog every once in a while. Just like last year, this is a calendar fashioned after one given by the newspaper Aloha Aina in 1906 to its subscribers. Click on the image and download the pdf file. You should be able to enlarge it to print even on poster-size paper if you want. Feel free to make copies and give it out to anyone you think will appreciate it!