From the kamaaina of Waiohinu, Whitney was told of somethings pertaining to the earthquakes.

A haole, Mr. Silloway, said that on the 29th of March until the 10th of April, there were more than two thousand, and it felt like on some days there were between three and four hundred. END_OF_DOCUMENT_TOKEN_TO_BE_REPLACED

Along with our ohana from Hawaii to Niihau; I am your friend living in distress, as my feet stand precariously at the edge of the pit of calamity. END_OF_DOCUMENT_TOKEN_TO_BE_REPLACED

On the 26th of March past, the island of Hawaii shook tremendously and swayed because of a large earthquake; this was the first of this sort of earthquake. The strongest was in Kohala and Kona.

AT THE PHOTOGRAPH GALLERY

MAY BE SEEN THE VIEWS taken of the Late

And the Effects of the Late

Views of Kilauea and other places. Also Cards of the Kings, Queens, Chiefs, etc., all for sale at low prices. Also, Oval and Square Frames of all sizes, which will be sold cheap.

Earthquake on Hawaii.—During this past week, earthquakes once again shook that Island, and volcanic ash covered the top of the Mountain, Mauna Loa.

On Thursday at 3 in the afternoon, that being the 2nd of this April, there came a great powerful earthquake, and people could not stand upright, and so too the animals. The soil of the earth spew up into the sky like smoke and hills tumbled down; large trees fell, and some of the valleys were filled, and houses fell; the number of houses which fell numbered 30 or more; and 3 churches fell, the churches of Kahuku and Waiohinu and Punaluu; and there is a large pit at Kahuku that is 80 feet in circumference and 350 feet or more deep, and from within this pit rose steam like the steam of the volcanic crater; the distance from the port of Kaalualu to this pit is 6 miles or so; and there are many other deeds carried out by God. END_OF_DOCUMENT_TOKEN_TO_BE_REPLACED

Up to Wednesday, 29th ult., there has been no further accounts of volcanic action on Hawaii. The earthquakes have ceased in violence and frequency, although the whole islands is still moved by slight vibrations. There was a smart shock felt in Kohala on Thursday, also the same day, a slight vibration here in Honolulu.

There are reports that the lava has again broken out in Kapapala, but we do not credit it.

We are happy to give our readers a clear and intelligent account of the late volcanic action on Hawaii, from the pen of the Hon. William Hillebrand, M. D., who has just returned from a close examination of the disturbed districts.

The account of the lava fissure at Kahuku, is entirely new to the public. H. I. M.’s Commissioner and Consul, M. Beranger, who made the tour with Dr. Hillebrand, has made a number of sketches of the most interesting volcanic appearances. END_OF_DOCUMENT_TOKEN_TO_BE_REPLACED

[Found under: “NEWS FROM HERE IN HAWAII.”]

We received a letter from D. W. Kaiue of Waialua, Molokai, written on the 3rd of Feb. telling of the great tsunami [kaikoo] at Molokai. And these are his words:

“This Tuesday, the 28th of this past January. A high tide began in Kona, Molokai. This is the first time such big waves were seen here; the kamaaina said that they had never seen such a big tsunami [kaikoo] like this before. The fishponds were destroyed, and the road at Keanoaio at Kumimi are ruined. The homes of Timoteo in Halawa were inundated, and the lanai was wrecked, on the night of the 29th; it was indeed a huge kaikoo, and a strong Earthquake at daybreak; the ground and homes shook for perhaps five Seconds. Those inside sleeping were awakened. The working of the Highest God is amazing.”

[See the comment by Gerard Fryer in response to the earlier post on this same natural disaster (as well as all the other uploaded related articles). The Hawaiian-Language Newspapers need to be studied for information in all fields of knowledge! …And again, in order for all the information from those newspapers to be read and understood, they need to be rescanned clearly before they disintegrate from the acids within the paper itself.] 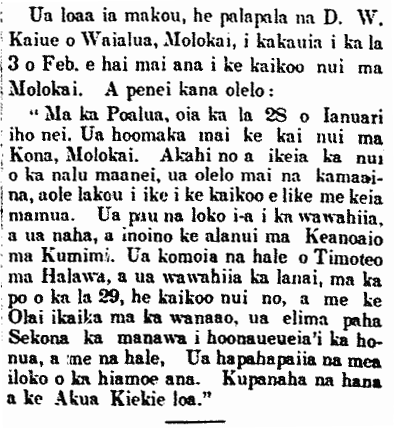 THERE WAS MUCH LOSS IN PROPERTY!

THE LATEST WORD FROM KAU!

Through the kindness of our loving friend, the Honorable W. T. Martin of Kau, the one who came from where the Fiery lava is wreaking havoc, we have obtained the information below, and we put before our readers the things he witnessed with his eyes, and heard with his ears:

According to the native son of Naihe of Kau, a river of lava is flowing from Maunaloa until the sea at Kahioipakini [Ka Hioipakini], and so the people of Kona cannot set foot in Kau and so too for Kau’s people to Kona.

Five craters of lava opened up at Puuolokuana, right in the middle of the land between the sea and the Mountain.

The height that the fire is shooting up from those craters of lava is five hundred feet or more. From the plumes headed upland and down; and from the rivers of lava from Puuolokuana to the shore and entering the sea; flashes were seen like lightning in the dark, reddish-gray, green, and white clouds. Also heard booming louder than cannon.

When the lava exited to the sea, a large heap of sand appeared in the water, creeping along, being pushed forward to the side going to Kona. The lava is creating new hills, and perhaps there will be many hereafter.

A frightening rumbling was heard beneath Waiohinu and the neighboring areas when the lava was flowing. This rumbling was still going on at the time the Kona Packet [Kona Pakeke] recently left Kau.

Before the lava appeared in Puuolokuana on the evening of the 7th of April, volcanic ash had already covered the houses from Kahuku all the way to Ninole, on the night of the 6th. The kamaaina and the haole were alarmed then, thinking that this was the end, because of the explanation of a knowledgeable haole.

The great stone church standing in Waiohinu was driven to the ground, and there was not one stone left upon another; so too of all the stone buildings around that area. The wooden structures were all smashed and were pushed to the Kona side from where they first stood. From Puaao until the sea of Waikapuna, the land was cracked open on the 2nd of April, by a powerful earthquake that was seen by all of us around the area, and the quake did not subside to the moment when the ship left. A few days prior to the eruption, the fissure closed up, but where it came together did not match up as before; it is uneven.

The settlements at Kaalualu, Paiahaa, Honuapo, Hokukano, Kaalaiki, the two Hilea, Ninole, Wailau, Punaluu, all the way to the sea of Keauhou: all of those houses were lost to the sea, “by the onslaught of the great seas of the woman of the pit.”

The kind of sea that struck the settlements above, it was ocean water joined with water coming up from the ground. The height that the ocean reached was like the height of the coconut trees near the homes. These waters were not like the ocean seen on our other islands; it was terribly unusual. If it was a tsunami [kai hooee], then there would be no human toll, but what came ashore was a swirling sea [kai owili].

There is volcanic ash in the wind, which was seen at Keaiwa during the time spoken of above (Apr. 2). The area covered by ash is nearly three-forth mile in length. And under the area covered over by ash is a river of water. As the wind stretches out, the sea cliffs of Kamehame and Mahuka were swept. Soon after, is when the water appeared, devastating those spoken of in the settlements above.

It is estimated that the number of cows covered over by the eruption [luai pele] at Kapaliuka was no less than five hundred, and the goats were no less than two thousand.

The number of animals killed by the lava in Kahuku and the two Pakini, all the way to Kamaoa, is thought to be no less than one thousand cows and horses. As for the goats and sheep, their number is unknown.

The lands which turned into pahoehoe, partially engulfed by lava, was the lands of Robert Brown [Rabati Baraunu], W. T. Martin, Kamamalu, W. C. Lunalilo, government land, and lands of other kamaaina people, lying outstretched from Kahuku to Puueo. These were all fertile lands.

It is guessed that the damages of all lands destroyed by lava included with property, is no less than seventy-thousand dollars ($70,000) should it be properly  tallied. The earthquake began in Kau from the last days of March until the 10th of April; it is believed that there were three thousand quakes that shook. Some were powerful while others were weak, but there was one that was the biggest, that being the quake of the 2nd of April, from which the many below perished.

We put forward the list of those who died as spoken of above.

Perished in the Eruption at Kapaliuka, Kau, Hawaii.

Died at sea at Makaka & Moaula.

From Punaluu was Kalawaialiiliii (f.)

Surrounded by the Eruption of Kahuku.

People who barely survived the tsunami from Punaluu to Paiahaa in Kau, Hawaii, numbered twenty three (23), other than those who died met with disaster in Keauhou, who are not counted here. Here are those that are living atop the hills:—Puu o Haao, Kahilipaliuka, about 400 or so; in the lands of Hilea & Kaala, 80 or more; and the majority fled to Hilo & Kona. The people of Waiohinu and the devastated areas, are gathered on the hill of Haao; it is there that they sleep, but perhaps a fraction has returned back to their own place. They will probably be facing difficulty from lack of food. The farms from Pakini until the sea of Kamaoa are covered over.