Mr. J. K. Kaunamano will print a new newspaper in the near future, in the mother tongue, from the side of the Hawaiian Political Association [Hui Kalaiaina]. The printing equipment of the Catholic Mission, will be what is employed by this new spokesman, and we simply assume that his editor will be someone skilled at this work, and so too of his workers. We hope that the Hawaiian people will progress through this endeavor.

[The first issue of “Hawaii Holomua” was published on 9/18/1893. It was a daily (except for Sundays). The last issue was printed on 1/5/1895. It was not printed in Hawaiian, but in English. This paper can be found on Chronicling America!] 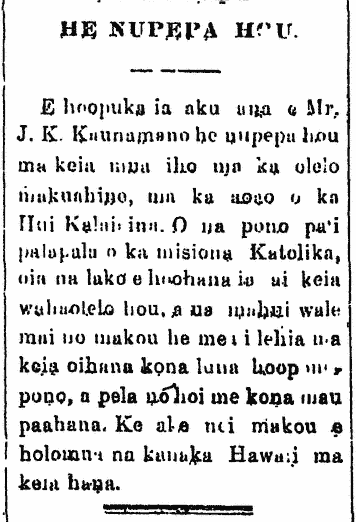 WHO HATH EARS TO HEAR, LET HIM HEAR.*

Being that in time that news reported of earlier will come, about the raising of the American Flag above Hawaii, from the authority of the Republic of America; and in regard to this, word is being sent out to my beloved nation of Patriots.

DECLARATION TO THE LAHUI.

To all Patriots, we pray [ke Ka o ia aku nei? ke Kalo ia aku nei?] that you will not visit nor approach the area where the American Flag will be raised; let everyone remain at their own Home, kneel and look to the almighty one to ask for his help for the Hawaiian Nation, Land, and Kingdom.

All heads and leaders of the men’s and women’s Ahahui Aloha Aina [Hawaiian Patriotic League] and Hui Kalaiaina [Hawaiian Political Association], are directed to heed this as well.