NOW 171 LEPERS KNOCKING AT THE DOOR OF HOPE

There are 171 inmates of the Leper Settlement who desire reexamination to decide whether they are now afflicted with the disease.

They will be examined at Kalaupapa by Dr. W. J. Goodhue, the resident physician, and Dr. J. T. Wayson, a member of the Board of Health. These doctors are the people’s own choice.

How it came that there are 171 wishing to avail themselves of the chance to be discharged comes about this way: When President E. A. Mott-Smith of the Board of Health was writing directions to Superintendent J. D. McVeigh regarding the examination of the nineteen named in Senator Harvey’s resolution and six or eight others who became applicants later, it occurred to him to have the superintendent ascertain if there were any other wanting to undergo the tests. The result is the list of 171 including the nineteen whose reexamination the Legislature ordered.

As reported in this paper last week, the applicants then on the list, having been asked to name the physicians they wished to examine them, all but five chose Dr. Goodhue. The five wanted Dr. O’Day, but on account of departure he was unavoidable. Another choice was offered the whole number, when Drs. Goodhue and Wayson were elected.

It was originally intended to bring the applicants to Honolulu for examination at the Kalihi receiving station, but this was found impracticable owing to the lack of accommodation. Dr. Wayson will go to Molokai at an appointed time to conduct the examination with Dr. Goodhue. 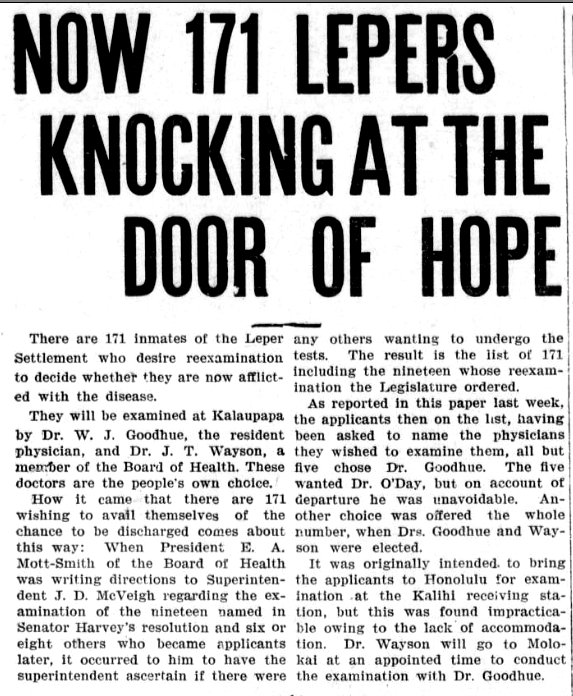 To the Editor of the Messenger of the Lahui, the Kuokoa Newspaper, Aloha no: Please allow some me some space in your delicate body, and it will be you that takes it about, so that the many friends may see that these are the parents, children, elders, grandchildren and the great grandchildren, returning back home. Perhaps not all named will leave this grave, perhaps but a fraction.

The writer was told that there were 108 names but all that was given him were 55 names, leaving 53 names. These are their names and the name of their doctor:

END_OF_DOCUMENT_TOKEN_TO_BE_REPLACED

THE PATIENTS OF MOLOKAI ARE EXAMINED.

To the Editor of the Kuokoa, Aloha no: Please allow me some space on your deck along with the captain’s passengers travelling aboard your ship (newspaper) and it is for you and your sailors to [anybody care to offer insight into this nautical allusion? “a nau ame kou mau luina e kulai pau iho i na nihoniho o ke ku’e keleawe o ka enekini uwila…”] and to send knowledge from Hawaii, the island of Keawe, all the way to Kauai of Manokalanipo.

Here are your loved ones, a husband, a wife, a child, a grandchild, a daughter, a grand, a great grand; and they turn towards home, to see and to smell once again the cool air of the land (should they return); the fish is an uku, a fish of Kahoolawe.¹

O Reader, shown will be the names and the years they have lived here in the land of the sick without counting the months and days.

Therefore, the number placed before [after] each name is the total years lived here in the land of the sick and the land where they were taken from; for the names without numbers, they don’t want it to be known, and some have not met with the writer; the writer put great effort into completing it, but he could not for it was a big task.

At 11:30 at night on the 13th of October, 1909, the S. S. Likelike arrived at the restless harbor of Kalaupapa; the wind was calm, but the disembarking of the passengers was still rough, they being J. D. McVeigh, Superintendent of the Leprosy Colony; Dr. Wayson; photographer Charles W. Weatherwax and Kikila the secretary of the doctors.

On the 14th, at 9 or so, the doctors W. J. Goodhue and Wayson arrived with the Secretary J. K. Keliikuli, interpreter at the dispensary; and the examination of the patients began; and to Kalawao went the honor of the first examination, as follows:

There are names left; perhaps they are those who knew the troubles ahead, for the road ahead is unclear, as the path is not laid out well, and some will return in confusion; wise are those who did not sign, but there will come a time when this will end.

¹”He uku ia he i’a no Kahoolawe.” A traditional saying playing off the word “uku “which is a type of fish, but also means reward or recompense.

[Wow… this took a long time, but i think it is an awesome document well worth the time put in. My aloha goes out to S. K. M. Nahauowaileia and the type-setting boys of the Kuokoa!!]

To the Editor of the Messenger of the Lahui, the Kuokoa Newspaper, Aloha no: Please allow me some space of your light body, and it will be for you to carry it away so that the many friends may see, here are their parents, children, grandparents, grandchildren, and great grands turning towards home. All of the names below will probably not be released from this grave; perhaps some.

There are a total of 108 names were shown to the writer and he has 55 of the names, but not 53. Here are the names and their doctor:

With my great aloha to my beloved lahui.

[See the very bad image of a similar article printed in the newspaper Ke Aloha Aina which I posted last year.]

News From the Land of the Suffering.

To the Editor of the Aloha Aina Newspaper, Aloha:

Please allow my small parcel a space in your newspaper which is greatly enjoyed, and that is what is down below; let the paper take it proudly around so that our multitudes of friends may see.

Movies come regularly every Wednesday, and are shown on the evenings of Wednesday, Thursday, and Friday; and every Saturday in Honolulu. There has been a building erected for the patients to watch the movies. The patients are thrilled. They donated money to buy a first-class phonograph [pahu olelo]. They are very happy with singing, the sweet sound of the strings and the blare of the brass instruments.

There was an announcement made to the ones without the sickness or those partially afflicted that wanted to be examined by the Doctors who are coming into the settlement.

Some went to sign up, and some just looked on because they did not want to go back to where they came from, being there might be difficulties waiting ahead for them. And because of the small number of those going to sign up, the Superintendent of the settlement ordered someone to go to the houses to sign people up; the total of those people number 58, but I don’t have their names; the only names I have are those who went to sign up, and they number 55, along with their doctor.

THE PEOPLE WHOSE DOCTOR IS DR. WAYSON

THE PEOPLE WHOSE DOCTOR IS DR. GOODHUE.

The total number told to the writer is 108. This includes the people chosen by the Legislature [?]

With much aloha for my Lahui.

[Here is just another example of why the original newspapers need to be reshot clearly before the acid in the paper consumes all of the words, leaving us with crumbs…]