Some Recollections about Birds

The Pueo is a smaller large bird, like a hen of a chicken. Its flesh is delicious like chicken or Turkey. It is a very intelligent bird in stealing chicks by swooping down. So too other small birds, like the amakihi, and therefore, it is called a thieving bird, and called an Iwa [Frigate bird]. The owl is not eaten regularly by most people, there are only a few that eat Pueo. Those who eat it are greatly ridiculed. It is in Kula, on Maui, that people eat a lot of Pueo. The perching of that bird is famous at Kula, Maui. This bird is not famous on Hawaii or here on Oahu.

The eyes of a Pueo are round. Its eyes are large. That is why it is called a Pueo, as it has staring eyes…

[This article goes on, but most of it is hard to make out. I am not even sure about that part that says Kula people ate a lot of owls because of the bad image. Maybe now that Hamilton Library has a super scanner, there can be progress made on reshooting all of the Hawaiian-Language Newspapers?!

Also this is part of a series on birds, but much of it and a lot of this paper in general is hard to read because of the bad images now available.] 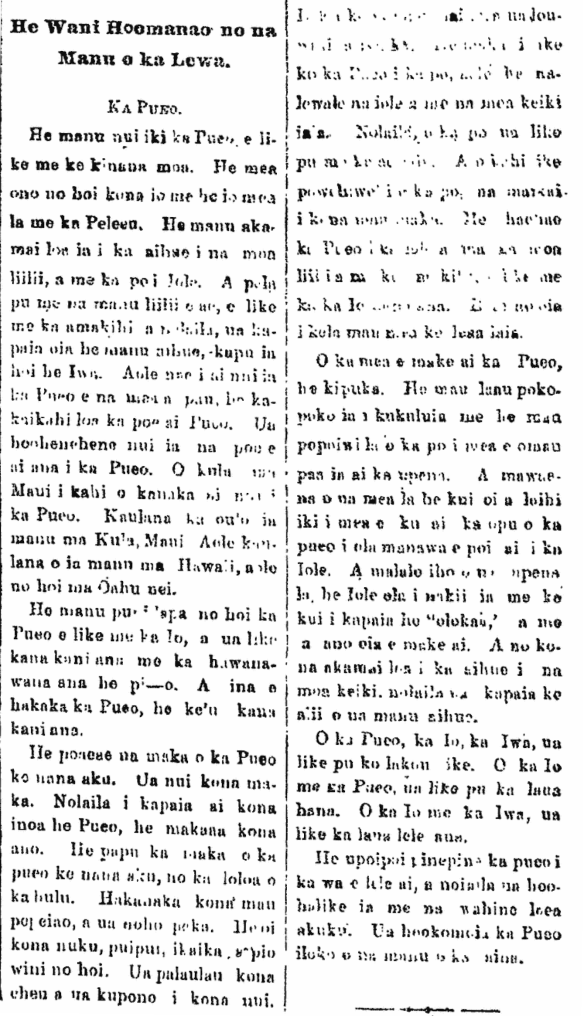 REASONS FOR THE RISING COST OF FOOD.

There is perhaps no other more important question pertaining to the life of man than that of the cost of food. How many people have sat down and thought to themselves about the reasons for the rising costs and ways to lessen their living expenses.

If we consider that there is no man on earth that can live without food, then we can find a reason; and through thought and careful consideration, we can figure out the major reasons for the rise in food prices.

First of all, for nations who rely upon other nations or other lands to supply their food, their food will be expensive, and food price stability will not be realized. But for a land that produces its own food, and exports the excess to nations who are lacking, they will see a fall in their food costs.

With these facts, we can move forward. Here we are in Hawaii, growing two major crops, however these two things are not main dishes which give sustenance to the body, but they are just treats. They being sugar and pineapple. We are putting our efforts into these two things and this nation draws its income from it; however, at the same time, we are forgetting about the foods necessary for the body, and because we are so focused on chasing after money, we assume that these funds will supply us with food for nourishment.

The problem with our focus on the pursuit of money, is that we neglect looking after the actual things that are necessary for our bodies, the main staples. We are purchasing our food from foreign nations, while we are in pursuit of making money. When the nations which we rely upon to get our food have a small harvest, this is the time we will see an increase in the costs of food. It will rise because of the small amount of food growing in those countries in which we rely upon from where we get our food.

And when the shipping costs rise, it will not be the sailors who will be in trouble, but it will be those who eat the food. For with the increase in the costs to the ship owners for pay for the sailors, or the ship builders perhaps, the ship owners will add on some pennies to the shipping charges, and when this comes to the hands of the consumer, he will understand that the expense to ship food here by boat resulted in an increase in the price of food; and the one paying the exorbitant prices for those foods is you, who eat them. And when the person is eating, he will see that the price of salmon here has risen.

And another factor in the rise of food costs is the number of people who eat the food, in a country that does not produce its own food. With the increase in population, the number of mouths will increase, so there will be less, or just doing without; and as a result of this lack, and to remedy it, the outside is relied upon to make up for this, and this is a problem bigger than all others. There may be a great amount of food brought in, but in comparison to the number of those who eat the food, that food is only a little, which is the main reason for the rise in food costs.

Therefore, we have come to where we can see where the problem lies. First, we do not grow staples. Second, although we have fertile land upon which we can grow food, we just grow things that bring in money and go without growing main foods.

What are staples? Vegetables and meat. These two things are staples. Other things are just treats, and man can live without them.

Here is Hawaii, a land where all foods can be grown which people eat here, along with the condiments. During the times of our ancestors, they had ample food so that they became big and strong. But these days, we are not planting staples. The Chinese and Japanese have come with their foods, with rice being the main food. This rice can be grown here in Hawaii nei. The haole came with their thing, the Irish potato and bread. Potatoes are being grown here now. As for flour, in the year 1849 or there about, Hawaii supplied California with flour. Wheat was grown in Kula, Maui, and on Molokai. Today, wheat can be grown should we desire. And if it is not possible, this is not a problem, because we are satisfied with other foods that can take its place.

And today, should we Hawaiians consider joining together in the growing of food, we will have the best food, and we will have produce that will help lessen the cost of food, as a result of this increase in the number of farmers.

The raising of livestock is also something needed, for that is a staple. Cows, pigs, goats, sheep, chicken, and the fishes of the sea. There is a lot of land now lived on by wild goats. If they were domesticated goats, then we’d have that meat, but because it is wild, and hard to get, it will not be enough for us; all the while the wild goats are feeding off of the fields which is for the sustenance of domesticated goats; some people are going into this profession.

The main thing that will lessen the costs of our food that we eat is the increasing of the growing of those foods; the joining into the growing of these things, because the quality of soil of this land is sufficient to grow these things. And let us look to making money through that, and not solely from treats.

We Hawaiians are supplied with land where we can enter into the occupation of growing food. There is probably no piece of land in Hawaii where staples cannot be grown. The land of Molokai has been opened up. The land of Kalamaula has enough water to grow food whenever it is desired. The lands upland of Palaau and Hoolehua will be opened up. These lands have soil good enough to grow Irish potatoes and corn.

Melons and other things can be grown which can support pig farming. With these staple foods, the farmer and those that raise livestock will receive good money from the mouths of those who live here, while being relied upon by those from outside to supply their food. Maybe the food won’t be cheaper, but you will have your food, O Farmer, with ease, and your family will be supplied, without it all being consumed; and the leftover, you can sent out to be purchased by those in pursuit of making money.

When foreign nations don’t have enough to send food to Hawaii, or when there are not enough ships, or if this nation enters into war, you and your family will have enough food, and you will get a higher price, because there will not be enough food imported. For these reasons, let us Hawaiians recognize these fields of gold stretched out before us, and let us grab it and harvest its many blessings. The seeking of one’s livelihood from the soil was the first way of life of the earliest men. And we know that there is no greater occupation than this. You are independent. You will have enough staple foods. You will have enough money, and with this money, you will have things that you do not grow. Clothes and things that make your life pleasant.

[I dedicate this to all the awesome farmers out there, both big and small (and fishermen and ranchers and dairy people for that matter). Also to the farmers’ markets, and establishments who support them. And to you, the people who try to buy local first. Conversely, I would like all of you politicians and others who think that agricultural lands and farmers are not important, to think about the big picture before another 89 years pass by. At this rate, we will be leaving the next generations with a very dismal way of life.]

KULA CRIES OVER THE SCORCHING SUN

We have received word that the district of Kula, Maui is once again faced with humid heat, and they are distressed over water; there is little water flowing through the pipes of Kula both day and night. There is a great need for rain to fall in this district, because the crops are beginning to dry out, and the animals are also suffering. Before, Waihee was known never to have water shortages, but they are starting to see problems due to lack of water because of the length of this period of drought with no rainfall. 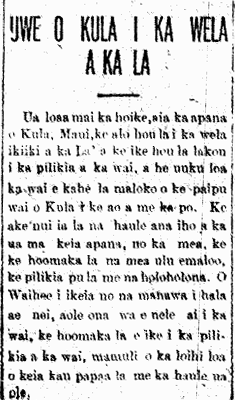 Here in Honolulu is Sun Fo, the child of Dr. Sun Yat-sen who is serving as President of the Republic of China. Just as his father was a favorite of the Chinese of this town, so too is he being treated with great affection these days. He is on his way to meet up with his father. This boy was born at Kamaole, Kula, Maui, in 1892, and he graduated from Saint Louis School the past year. He will continue his travels to China aboard the Chiyomaru. This Thursday, he visited with Governor Frear and Queen Liliuokalani.

[It seems many other sources like this one say Sun Fo was not born here in Hawaii… “Sun Yat-sen in Hawai’i: Activities and Supporters”]