One of our readers posted a question:

I am searching for information on Puea Cemetery’s undertaker services in 1953. My brother is buried there and there is no grave marker to locate the site. Does anyone know if there was a document of burial plot division and location with names?

[Might any of you out there be able to help?]

THAT OLD KAMAAINA PASSED AWAY.

At his residence on Liliha Street, on the afternoon of this past Tuesday, Lehuanui K. Paleioholani grew weary of this life, one of the old kamaaina of this town, at seventy-two years old.

On Wednesday afternoon his funeral was held, and his body was carried to be put to rest at the cemetery in the uplands of Puea.

Paleioholani was born in Hilo, Hawaii, on the 11th of the month of February, 1844, whereupon he witnessed the five kings who ascended to the throne of Hawaii nei, and the one queen; and he also saw the waving of the starred flag of the nation that is now governing his land of birth.

Mrs. John K. Notley is his living daughter, and the remaining descendant by that name Paleioholani.

Being that Paleioholani was a member of a number of Hawaiian associations, the members of those associations came to march along in his great procession.

[This is none other than the great historian, S. L. Peleioholani.] 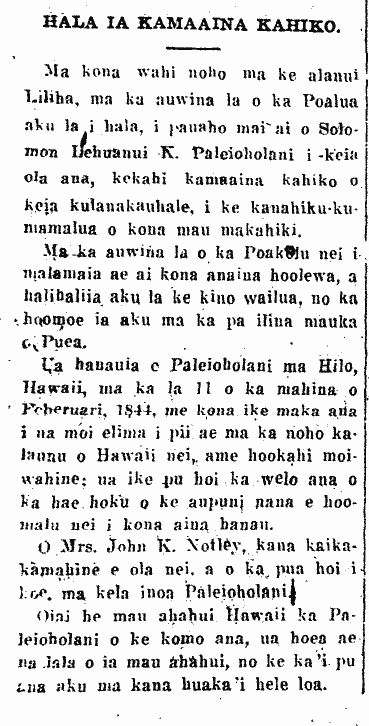 GREATEST OF ALL IS ALOHA, IT CANNOT BE DROWNED BY GREAT FLOODS.

Mr. Editor of the Newspaper Kuokoa; Much aloha to you:—Please extend your patience with this sad parcel we are sending, and allow it some open space in the Nupepa Kuokoa, should there be space, so that the family and friends of the one who left this life can know of it, from Hawaii, the island of Keawe, to Kauai of Mano with its twinned lei of mokihana.

At 2 a. m., on Monday, June 19, A. D. 1922, the angel of peace came and took the life spirit from the beloved body of Mrs. Mileka Rose Silva, at our beloved home at Number 1033 Wolters Lane, Kapalama, Honolulu, and left her spiritless remains for us, the ohana, with sadness in love, for our beloved who left this life.

Her body remained at our home until 3 p. m., Tuesday the 20th, and the Rev. Samuel K. Kaloa held a service at the home, as well as where her remains were laid to rest at the Cemetery of Pue’a. END_OF_DOCUMENT_TOKEN_TO_BE_REPLACED

MY BELOVED WIFE HAS GONE.

Mr. Solomon Hanohano, captain of the Kilohana; Aloha oe:—please extend me your patience, and your boys of the press, to insert into an open room my bundle of tears of clouds banks appearing in the morning which just arrived, and it will be for you to carry it to the homes of the many friends of my beloved wife.

Ane Kealoha Kawaihoa Namakelua has gone. She left me, her husband in marriage at 12 noon, on the 7th of January, 1919, at the home of our foster parent, Laika Kekuewa and Mrs. Hiku Kekuewa, on Morris Lane, Kapalama, Honolulu, and her earthly body rests at Puea Cemetery the eternal sleep, just as is written, for dust thou art, and unto dust shalt thou return [he lepo no oe a e hoi hou aku oe i ka lepo.]

My dear wife was born from the loins of Gapa (m) and Kahalewai (f) at Heeia, Koolau, Oahu, the home of her parents, on the 25th of December, 1892, therefore, she spent 27 years and 12 days in this life and left me and our hanai and all of the ohana grieving in this world.

Because of the sickness she had upon her body, a remedy was sought from doctors for six months or more, but the knowledge of the son of man could not hold it back. And so what the Great Book says came true: Man that is born of a woman is of few days and full of trouble. [O ke kanaka i hanauia e ka wahine, ua piha i na popilikia, a he pokole kona mau la.]

My dear wife was educated at the public school at Kahuku, and we were married on the 18th of May, 1908, by the Father Abraham Fernandez, of the Church of Jesus Christ of the Latter Day Saints, and we were married for 10 years and 6 months. END_OF_DOCUMENT_TOKEN_TO_BE_REPLACED

At 11:05 in the evening of this past Saturday, November 25, after being sick for a long time, Mr. Solomon Meheula gasped his last breath at his home, and he left in Puna his friends and fellows remembering him and all of his fine works that will live on as a monument to him.

His education was began at an Episcopal school in Waialua, and when he returned to live in Honolulu nei, he entered the Iolani School of this town, and after he became a teacher for that school. During this time he edited the Episcopal Hymnal in the press of the Episcopal Church, and it was under Mr. Meheula’s guidance that this great and valuable work was completed; he was an assistant to the Bishops Willis and Restarick in the Episcopal Church.

After Bishop Willis left Hawaii nei, he again became a school teacher, and his wife was the matron of the school, and the children of the school were under her care.

A number of years ago, he was one of those who ran for representative under the Democratic party, however, he was not elected. In 1907 he entered and began working at the police department as a secretary under the County Deputy Sheriff and thereafter with the city and county government. At that time, he became a teacher in a special Hawaiian-language class for the military school, the Honolulu Military Academy.

The late Solomon Meheula was one of the Hawaiians who was fluent in English, and he rearranged a number of story books into Hawaiian.

At 6 o’clock in the evening of this Monday, his remains were placed for the last visitation by his fellows and friends at the Silva Mortuary on Kukui Street and Nuuanu Avenue, and at 2 o’clock in the afternoon of this Tuesday, his funeral was held at the Episcopal church, St. Andrew, and at 3 o’clock his remains were carried to the Puea Cemetery.

A CHILD AND A NATIVE OF HAWAII

Last week, the last rites were carried out on the body of Joseph Kahahawai, the one who was shot by some soldiers after they kidnapped Kahahawai from the courthouse.

Kahahawai went to show himself before the officials, or those of the court, and when he exited from that office, he was pointed out by a women sitting upon her car to some other haole people.

When one of the two of them saw that Kahahawai was coming out, one of the haole went and said to Kahahawai to go with him, and showed Kahahawai a written document, and that was when Kahahawai agreed to go with him to the side of the car, but not the car belonging to the woman who pointed Kahahawai out; he went and death was sentenced upon him without him knowing the consequences of him agreeing to accompany these haole.

On Sunday was the funeral rites, and his body was laid to rest at Puea Cemetery on School Street.

As was reported in the papers, the funeral was large as the buddies and friends of the boy went along with his body to the graveyard.

The first services over his body was held at the Catholic church, and thereafter he was taken to the graveyard, and there, Rev. Robert Ahuna of the Christian Science Church held the last rites over the cold body of the child of whom the parents said their child was not at fault.

The Rev. Ahuna spoke before the congregation gathered together [?], “This kind of thing has not been seen here in Hawaii, but now this cruel deed is taking place because the law was taken into the hands of some people.”

There were thousands of people who came to Puea Cemetery.

Because there were so many people, they tried to move apart the people standing, as the hearse could not enter.

After the services by Rev. Ahuna, that famous hymn was sung, the hymn sung always at graveyards when someone is buried. That hymn is “Ka Lani Kuu Home [Heaven is My Home],” and after it was over, that beloved song of Hawaii nei, and a Nationalistic song for Hawaii’s locals [Hawaii Ponoi] was sung, and then dirt was covered over the child of Hawaiian parents who are loved.

He has gone forever, but memories of him shall not be forgotten.