The first fourth of the Kamehameha Girls’ School will open on

For applications to enroll in this school, you can write to Miss Pope at Kamehameha School, or to Miss Pope in the Kindergarten Room at Emma Hale, on Saturday mornings from 9 to 12, where she will be happy to meet with the applicants. The tuition is fifty dollars  a year. No applicant below 12 years old will be accepted.

[As you can see, this was barely legible! 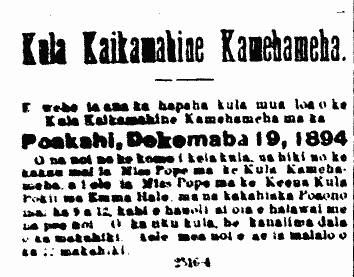 Day of Remembrance of Pauahi.

This coming Monday, November 19, will be the celebration of the birthday of the open-hearted royal lady who has passed, but who has left her great estate for the building of schools for the instruction in elementary education and spreading out to other branches of knowledge, in trade and in other industries, and not for just one sex [kama¹] but for the two sexes.

The boys school house has been completed and some years have been spent in instruction; some of the early students of this school have furthered their desire of knowledge and have moved on to other schools, while others have graduated and are gainfully employed, while the rest remain here increasing their knowledge. The results are evident.

The big thing perhaps on this coming birthday of the one who built the Kamehameha Schools, is the opening of the doors of the beautiful and brand new Kamehameha girls’ school, which stands proudly, along with the commemoration of the day that she was given birth to and became the mother of education.

¹Although I have not found “kama” in dictionaries defined as “sex,” as in male or female, I have found a number of uses in the newspapers and other documents.

Applications for admission may be addressed Miss Pope, either at Kamehameha Manual, or Miss Pope will be in the Hawaiian Kindergarten Room, Queen Emma Hall, Saturday mornings, from 9 to 12, where she will be pleased to meet applicants. The tuition is fifty dollars a year. No applicants received under 12 years of age.

[How things have changed!]

At Honuakaha, Honolulu, twins were born to Mr. Oneha (Chinese) and Mrs. Keano Oneha, one girl and one boy. The parents named them after the current news at the time of their birth; that being this: Kuikahi [Treaty] is the girl, and Panailike [Reciprocity] is the boy, and I announce it. How great that the Reciprocity Treaty has passed, and that this phrase is complete when speaking the names of these children born together at the same time. S. K. Pihaolioli.

[Children were often named after current events to commemorate the occasion.

There was a great debate over the merits of the Reciprocity Treaty with America, with many articulate compositions for and against it in the Hawaiian-Language Newspapers. More on that at a later date.]