David L. Conkling Is Given Fat Job in Hawaii

[Special Correspondence of the Call]

HONOLULU, July 2.—David Lloyd Conkling, formerly chief clerk of the territory, has been appointed territorial treasurer to succeed A. M. Campbell, whom the senate refused to confirm.

Conkling is a young man who came to Hawaii from San Francisco as a fancy bicycle rider and racer, having been well known on the coast tracks 10 years ago.

After the bicycle craze died out he became purser on one of the inter-island steamers and later was a reporter for the Honolulu papers. He was appointed chief clerk by Governor Carter and received his promotion from Governor Frear.

Conkling’s appointment has been received with general favor. 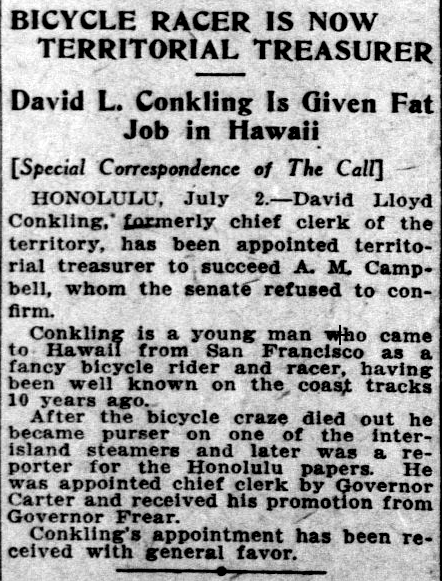 Hawaii is a Gold Mine for America

According to the report by the treasurer of the Territory of Hawaii, D. L. Conkling, in the 12 years which have passed since the annexation of Hawaii to America, the income just from duties during that time come to more than $15,000,000, more than the other states of the United States. In the past year, Hawaii paid $1,772,869 in income taxes and duties to the coffers of America.

The rest of the states fell behind Hawaii in duties and income taxes, and therefore what we say about Hawaii being a gold mine for America is true; it is Hawaii who gave it to America then asked questions.

All of the expenses for the forts and the dredging of the harbors are paid for by Hawaii’s dollars, and America suffers nothing for Hawaii.