The Native Sons of Hawaii to the Front.

RESOLUTIONS AGAINST A REPUBLICAN FORM OF GOVERNMENT ADOPTED.

Over six hundred people, Hawaiians and foreigners, were present at the mass meeting called by the Native Sons of Hawaii, and held at the Gymnasium on Monday evening. Many prominent natives were present and listened to the discourses of their wise leaders with attentive ears. Long before 7 o’clock streams of people were seen wending their way towards the Gymnasium. The Royal Hawaiian Band, under the leadership of Prof. D. K. Naone, was stationed on the makai end of the hall, and discoursed most eloquent music for over thirty minutes.

J. K. Kaulia, the Secretary of the Native Sons of Hawaii, called the meeting to order at 7:45 p. m.

Hon. A. Rosa was elected chairman of the meeting. On taking the chair, he said that he came as spectator only. He was not a candidate for the coming elections, and he was not a member of the society. He asked the audience to conduct the meting in an orderly manner, so that nothing would mar the success of the object in view.

The Chairman called upon the Rev. J. Waiamau to open the meeting with prayer which was done.

A. Rosa said: The subject for discussion this evening is, “Our denunciation against adopting a Republican for of Government for Hawaii.” You are at liberty to express your views, whether pro or con. The first speaker—J. L. Kaulukou—will speak against the Republican movement. The time allotted to each speaker is limited to ten minutes.

J. L. Kaulukou—Mr. Chairman and gentlemen: We are assembled here to-night because false rumors are being propagated abroad that we, native sons of the soil of Hawaii, are in favor of a Republican form of Government. Our bitterest enemies are doing their utmost to spread this unfounded report. It is our duty tonight at a mass meeting assembled, to notify the world at large that the aboriginal Hawaiians are body and soul against such a movement. We do not favor annexation either with America or with any other foreign power. We have called this meeting because foreigners abroad are entertaining this idea, which is most derogatory to our interests. Hawaiians are not the only one concerned in this question; foreigners, too, who have adopted Hawaii as their home; they have a right to stand up and denounce this movement. [Applause.[ A queen now reigns over us. It is our duty as loyal citizens to do our utmost to perpetuate the throne of Hawaii. England cherishes her Queen, and we should adore our Queen. Our ancestors have been accustomed to a monarchial form of government, and we, the younger generations, have been instilled with undying loyalty to our sovereign. Our forefathers considered “love of the throne, love of country and love of the people” as one, but we have divided it into three distinct persons. I will now read to you the following resolutions, carefully prepared by a committee of the Native Sons of Hawaii: END_OF_DOCUMENT_TOKEN_TO_BE_REPLACED 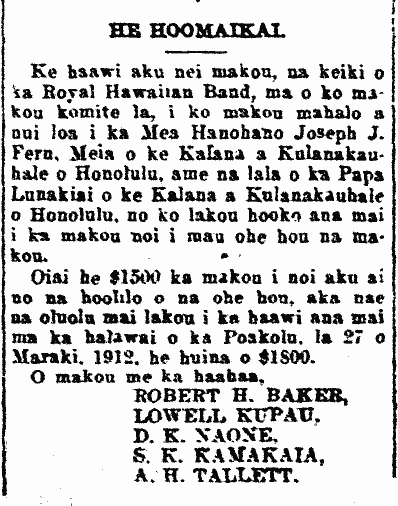