HE MELE NO KA AHAHUI KAMEHAMEHA.

Please allow me to talk about some matters dealing with the poisonous limu of Muolea in Hana, East Maui.

In ancient times, it did not grow profusely like it does now, and the kamaaina living near those tide pools didn’t know this was poisonous, however, this is what is known; When the children went to those tide pools and gathered the small fish [ohua] and ate them, if they ate a lot of the ohua, they grew dizzy and lay unconscious by the tide pools, and after being given medicine, they revived.

Later, a man from Honaunau in Kona, Hawaii arrived, and it was he that found that this was poisonous. After all the sweet potato was eaten by the pigs, he fetched some of the limu and smeared it over sweet potato and when the pigs ate again, they died, and not one of them lived. If dogs came and licked the vomit of the dead pig, the dogs died as well; it is from this that the limu was known to be poisonous, for that limu grows in Honaunau, Hawaii as well.

The proper thing to do is to prod at it with a stick, and if it sticks to the stick, place it in ti leaves or taro leaves [?].

When that limu is touched, it shrinks and wilts, somewhat like sleeping grass [pua hilahila wale]. It is not long like the other limu, but when you look at it, it somewhat resembles the suckers of an octopus.

On some sacred nights of the year, a red light is seen from those places.

In the year 1841 perhaps, those tide pools were paved over with rocks, but these days, they are growing wild again and is spreading.

The fish that go around that place, they don’t die, but should you eat the fish from those tide pools, you will end up dying.

This is a strong poison taking effect immediately, similar to the powerful poisons of the haole, and perhaps even stronger.

For this reason, the locals of that place have restricted access to that place, not allowing anyone without authority to go there.

With appreciation to the typesetting boys of the press and to the Editor goes my aloha.

[The image of this article is very hard to read. The original newspapers need to be rescanned before it is too late!] 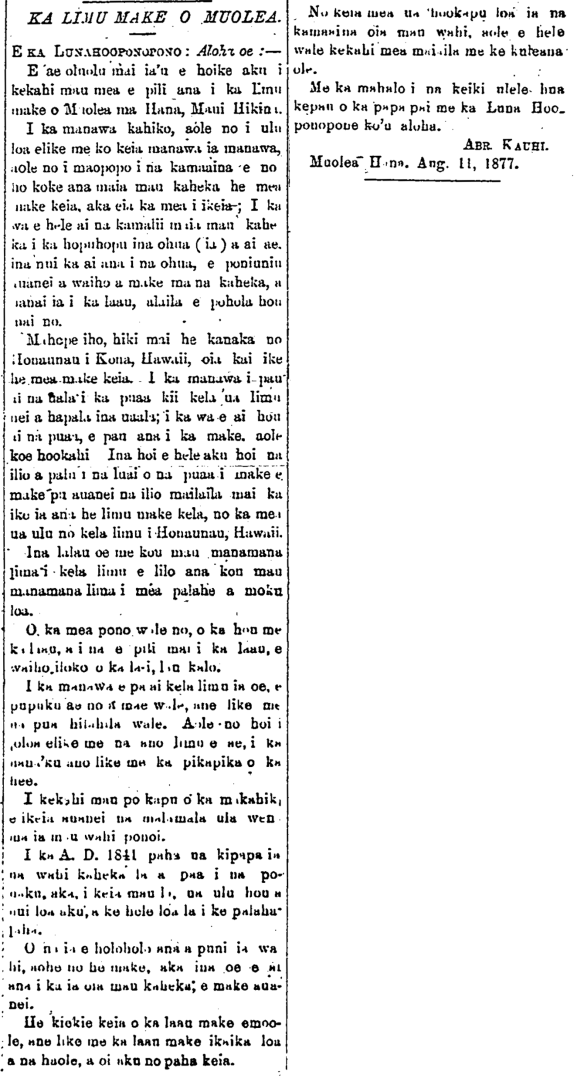 The Songs of “Prince” Lei Lani Were Just Beautiful

His Falsetto Voice Was Heard at the Concerts He Gave in the Liberty Theater Last Week.

The concerts given by E. K. Rose, known by the stage name “Prince” Lei Lani [Leilani], in the Liberty Theater on the nights of Friday and Saturday, and the afternoon of Saturday of this past week, those were some of the most beautiful concerts, filling all those who attended with delight at hearing in person, the singing voice of this musician of Hawaii nei.

Amongst all of the people who attended to hear his concerts, they said but one thing; that being of their appreciation and desire, not just for all of the different mele sung, but for the loveliness and beauty of his voice, showing that within him are the high talents for which all Hawaiians have pride in him.

For the first time, Honolulu’s people heard singing live along with a phonograph [pahuolelo], auwe, if people weren’t clear about who the singer was on the phonograph, this lack of clarity was put to an end by them hearing the real “Prince” Lei Lani’s voice, being that they were the same in every way.

While the phonograph was playing a song called “Pua Sadinia,” “Prince” Lei Lani sang it in Alto, and it sounded beautiful. “Aloha Oe” was another number played on the phonograph while he sang in alto.

The local singers pale in haole songs, and cannot match the high range of his voice along with the modulation, and yodeling; there is no match, like the voice of a bird.

There was one unfortunate thing in the concert, that was that it was not filled, for there are not many concerts of this sort put on here in Honolulu that are as beautiful.

“Prince” Lei Lani will spend a number of months here in Hawaii nei before turning back to return to America to sing, and while he is here, he will be giving many concerts. He’ll be going to Kauai to perform concerts there, and Kauai’s people are planning a reception for him with excitement.

Other than to sing, he is returning to America, taking with him many photographs of all sorts of places here in Hawaii nei, scenes showing the people of America that Hawaii is a lovely place full of intelligence; not as was shown by some people using ridiculing pictures, saying that Hawaii is in the dark of pagan times.

[I wonder where the pictures ridiculing Hawaii were printed, and who it was that did it.

The internet is pretty amazing. Some ninety years later, we can hear Prince Lei Lani singing “Pua Sadinia” and “Aloha Oe”! Mahalo to cdbpdx for putting it up on youtube!!]

One of the Hawaiian singers who is touring all over America, and returned home.

He held a Concert at the Liberty Theater the other night organized by the Hawaiian Protective Association [Ahahui Puuhonua] and the Royal Order of Kamehameha [Ahahui Kamehameha].

There were many Hawaiian songs sung by him which were highly acclaimed by the crowd.

WE ARE SELLING HIS BRAND NEW HAWAIIAN RECORDS, AND WE ARE THE ONLY ONES WHO HAVE THEM.

Put in your orders now.

Open in the Evenings.