The Leprosy Hospital on Molokai.

Two weeks ago we published a communication from a gentleman of unquestioned veracity, regarding the management of this establishment. Rumors had from time to time reached us about the neglected conditions of the unfortunate natives driven to that secluded district, but not having the facts at our command, we were unable to speak knowingly. We have since learned that the real state of things has not been more than half published, and that every word of our correspondent is true.

We have no another and more full statement furnished by a gentleman who has visited the leprosy station on Molokai. He informs us that the number now there is 118, of whom 80 are males and 38 females. Besides the lepers, there are 34 persons not diseased, who have gone there to take care of their sick friends or relations. These persons live with the lepers, eat and sleep with them, and are free at any time to go and return again to their homes. They assert that the Board of Health gave them permission so to do. There are also eleven children in the settlement, but whether they are diseased or not, we do not learn.

The overseer reports only 23 deaths as having occurred since the first lepers were sent there in November, 1865, but the number is believed to have been much larger, as the total number of lepers sent there probably exceeds two hundred. We quote from our correspondent:

“The great majority of the lepers are a pitiable sight to behold. I have not seen more than four or five in the whole number who appeared to me able to work. The hands and feet appear to be the parts most generally destroyed. How anybody, who has seen them, could expect them to do much work, I know not. I am satisfied that by far the greater portion of them cannot do much. Their hands and feet are a terrible sight. The disease evidently progresses very rapidly among those who have been sent there. I visited them last April, and on this my second visit, I was surprised at the rapid progress of the disease in various individuals. There they are, thrown constantly together, in all stages of the disease, with no medicines, no physicians, no comforts—furnished only with the absolute neccessaries for keeping soul and body together in a well person—and PUT ON STARVATION RATIONS AT THAT—a mass of seething, festering corruption, rotting to death.

“The Board of Health have done perhaps as well as they could under the circumstances; but if they cannot control the circumstances better than they are now doing, I shall begin to consider the plan a decided failure. At first, I believed the plan of isolating them there was the best; but having seen how it works, I am more and more inclined to believe that the best and least expensive plan would be to have but one hospital, and that in the neighborhood of Honolulu, where they could be under the immediate supervision of the Board of Health and a physician.

“The rations for some time past have been four biscuits of hard bread per week to the stronger ones, and ten ditto per week to the feebler ones: and even that only allowed to those who have been there less than six months. Those who have been there longer are told to ‘work if they want food.’ Four pounds of salt beef or salmon per week is the allowance of meat to each one. The beef is a swindle. Much of it is corrupted, and some of the barrels are daubed with tar on the inside, which imparts its taste and flavor to the whole contents. The salmon is in good condition. The old thatch houses which were standing when they went there are all the houses they have, except as some of the stronger ones are able to put up huts for themselves. They have no suitable house of worship, and ought to be furnished with a plain frame building for the purpose.

“Notwithstanding their wretched condition, they have planted some sweet potatoes and other vegetables. They have no kalo or poi at present, though there is enough kalo land to supply them well, if properly managed. But they have a a good quantity of kalo planted, and when it gets ripe, some months hence, may again enjoy their native staff of life. The agent who has immediate charge of them, Mr. Louis Lepart, does as well as he can by them, but is often at his wits’ end to know what to do. He can only dole out to them such supplies as he receives from the Board of Health.

“I ought perhaps to mention that there has not been a single birth among them up to the present time.

“A physician went among them, saw them, examined a number of them, and unhesitatingly affirmed that several who were there as lepers, had not that disease at all. Many of them have been subsisting in great measure, for months past, on wild horse-beans, which grow abundantly among the rocks. But the weaker ones cannot endure the fatigue of gathering and roasting them. I am sure, if the Board of Health could only see and know the truth in the case, they would endeavor to remedy matters; and yet Mr. Lepart and Mr. Meyers say they have represented the case to Dr. Hutchison.

“Such are the facts as I learned them on the spot, and saw them with my own eyes, and gathered them from satisfactery testimony. I believe they are correct, as I was careful to make full inquiries of all parties.”

Here is a clear impartial statement of the Molokai Leper Hospital, reflecting sadly on the Hawaiian Government. The Minister of the Interior, as President of the Board of Health, is responsible for the condition of these lepers, and to him—a physician, supposed to be qualified to take charge of such a service—the public look for reform. The whole plan of isolating the lepers in such an out-of-the-way place on Molokai, was a great mistake. They should have been kept here near Honolulu, where their wants can be supplied, and where proper medical attendance can be given. The hospital at Kalihi is a credit to the nation, but for its condition, Dr. Hoffmann chiefly deserves credit; for he is untiring in his zeal and efforts in behalf of these poo creatures. Now let the rest be brought here, kept from starvation, and cured if possible. Under Dr. Hoffmann’s care, a large portion of them may yet be cured.

The Lepers on Molokai.

To the Editor of the Commercial Advertiser:

Sir:—One of those strange scenes, which show how petty and mean are all the doings of this life, struck me on my last trip to the leprosy village of Molokai. Indeed the beautiful and picturesque view presented by the perpendicular rock that surrounds the place—this awful precipice of from two to five thousand feet in height—was truly grand, and the perfect quietness of that isolated spot gave deepness to the impression received on my visit. It would indeed be a fit paradise in which these poor sick wretches, stamped forever by a fatal destiny, might end the rest of their days in peace, though banished far from home, friends and kindred. Not only do natives, but human cupidity seems to persecute them.

The condition of these poor and unhappy wretches does not seem to be too low a subject for the most selfish intrigues and speculations.

Interested by the study of that disease which has afflicted mankind for so many centuries, I descended the nearly perpendicular pali, to witness the lepers, accompanied by Mr. Myers of Molokai, and Mr. King, the photographer of Lahaina, who were anxious to share with me the fatigues and pleasures of the trip.

But how was I disappointed, and what terrible lesson had I yet to learn of human infamy, and official neglect! How indignant was I when I heard the cries of the emaciated and ghastly inhabitants of this place, like the wailing of damned souls in hopeless hate, “Pilikia, aole ai, aole ai!” Their forms still seem before me, asking God as well as the Government, “what they have done to deserve such a punishment?”

It is true that Mr. Louis, the superintendent of the place, wrote to the Board of Health at Honolulu for provisions. The answer came back, “Let them work.” Yes! Let them be driven out of human society, and be compelled to work! Let them work with their sore limbs and swollen toes, while exposed by every change of temperature to the most painful exacerbations of the disease. Let them work, so that we may have our share of the products of their labor.

The Board of Health could hardly avoid sending a barrel of salt beef; (fresh meat is here a sight good for sore eyes;) but it smelt so horribly, that only a famine could persuade these poor wretches to eat it.

For the benefit of humanity, please to publish this letter.  Sic itur ad astra.

The Lepers on Molokai.—We are rejoiced that the Commercial Advertiser has drawn the public attention to the lepers on Molokai. The whole scheme of placing these miserable beings in so remote and inaccessible locality has proved itself worse than a failure. Let there be some isolation—some separation—but none so extreme is necessary. The Board of Health had, we doubt not, none other than good intentions, but we trust they will revise the whole subject.

[This article comes out soon after the policy to isolate the patients in Kalawao and Kalaupapa. It is a response to articles appearing in the Pacific Commercial Advertiser (predecessor of the Honolulu Advertiser). See following two posts.] 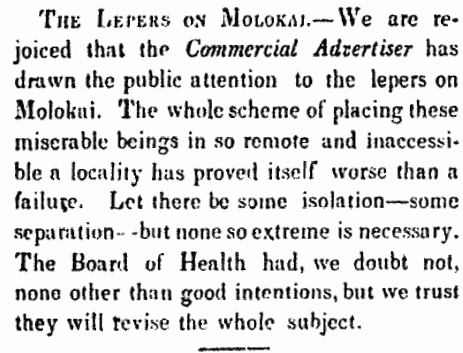 There were a lot of fish in the reservoir of Wahiawa when it recently went dry; from Oopu, to Shrimp [Opae], Red Fish [I’a Ulaula], and Chinese fish [i’a Pake]. They were all taken by the Japanese and those of the area. How sweet tasting. So delicious! 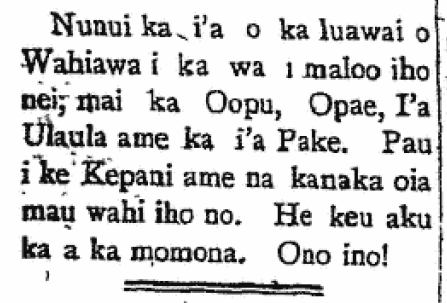