A Mooolelo about
Aladdin and the Lamp that was
AMAZING!

Translated for the “Hoku o ka Pakipika” from
“The One Thousand and one Nights of Arabia.”
Translated by S. K. Kaai.

[Tales from the One Thousand and One Arabian Nights seems to be one of the most often translated selection of stories throughout the life of the Hawaiian-Language Newspapers. This story of Aladdin and the Enchanted Lamp itself appears several times. Does anyone know what Simona K. Kaai based his translation off of? Could he have been translating from the French of Antoine Galland? 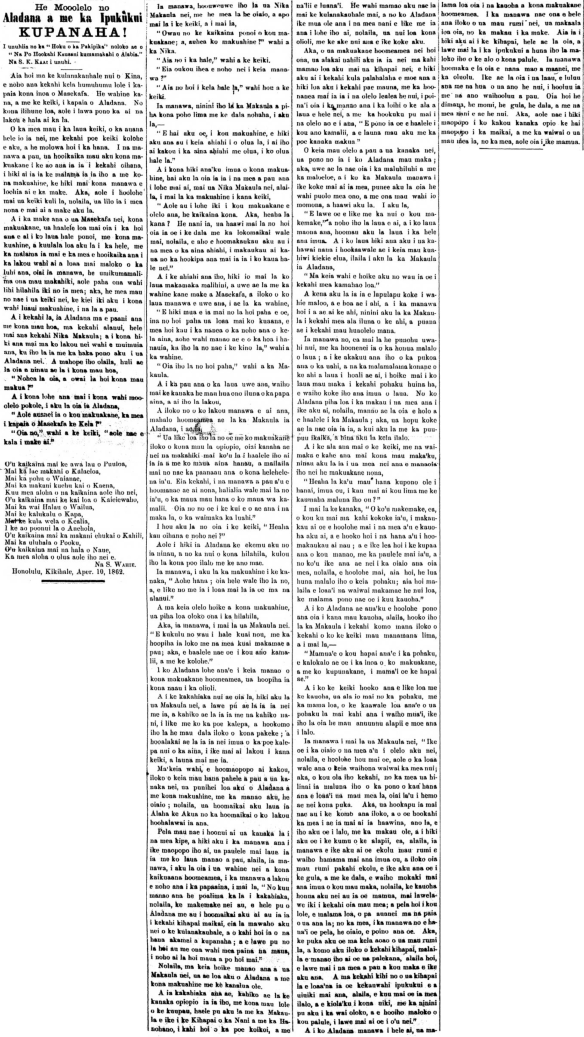 MORENO ON THE MISSIONARIES.

Editor Post: For several years your public-spirited paper has published correspondence and statements submitted by me about Hawaii in which was foreshadowed the present state of affairs. The revolution which has just taken place is the inevitable result of missionary rule; the long-standing and deep-rooted cause of the unrest.

The missionaries in Hawaii, as in China, Japan, and elsewhere, consider that country as their open hunting grounds, regardless of the rights, customs, wishes, and priviliges of the natives and of stipulations.

I positively know that the self-appointed four chiefs of the Provisional Government in the Hawaiian Islands and the five commissioners coming to Washington to negotiate a treaty of annexation are, without a single exception, missionariesʻ confederates. Not a single native Hawaiian is with them, therefore, they cannot be considered as the representatives of the Hawaiian nation, of which they are aliens and enemies, but only as the emissaries of one side (or of a higher), which is not the right side.

The truth about Hawaiian affairs has never reached the State Department and that is the reason why, in the department, the knife has always been taken by the blade instead of by the handle in dealing with the Hawaiian question.

The United States always sent third rate politicians as ministers and consult to Honolulu, hence the erroneous information about Hawaii. I have on the spot studied Hawaii and the Hawaiians, their troubles with the missionaries of all creeds, and when distant from the islands I have kept an uninterrupted correspondence with the leaders of the Hawaiian nation, such as the Hons. Wilcox, Bush, Testa, Kaai, Kapena, Kaunamano, Kimo Pelekane [James I. Dowsett], and others.

My views on the Hawaiian question I explained at length to President Hayes and Secretary of State Evarts, to President Cleveland and to Assistant Secretary of State Porter: later, to Senator Morgan and to Congressman McCreary, and these are the statesmen that ought to dispose of the Hawaiian question and render justice to the weak, ill-treated, honest, and generous Hawaiian people that have been continually misrepresented, misjudged, and grossly wronged.

In accordance with the good order of things the coming self-appointed and self-styled Hawaiian commissioners, with more appearance than substance, should not be received by the United States authorities, because their self-attributed mission to Washington is based only upon selfish and malignant motives.

This will be a good opportunity for the great people of the United States to show their sentiment for fair play and generosity toward the unfortunate, harmless, friendly, and oppressed Hawaiian people, worthy of sympathy and of help in this their hour of national distress.