[After looking at that Kapiolani Park horse racing picture, you might be thinking, “Seen one horse race, seen them all…” But what about this!

This here is perhaps the only image* known of Joseph Mokuohai Poepoe (patriot/historian/statesman/newspaper editor/lawyer/translator/storyteller…). It comes from his obituary printed in the newspaper Kuokoa.

This is the image you will see from the newspaper online:

Here is a photograph taken by that same amateur from the original newspaper. It isn’t the best of pictures, but at least you get an idea…]

*There is one other image I found, but Poepoe is standing far in the back, and is hardly visible. It was taken at the opening of the Legislature (just a few months before he dies). Poepoe stands in the top row, 4th from the left. (This is the image you will find online.)

[Here is what the typical picture looks like from a Hawaiian-Language Newspaper when you see it online. This particular image is of the horse races at Kapiolani Park in 1913.]

[However, that image taken by a total amateur with an average camera shot directly from the newspaper looks like this.] 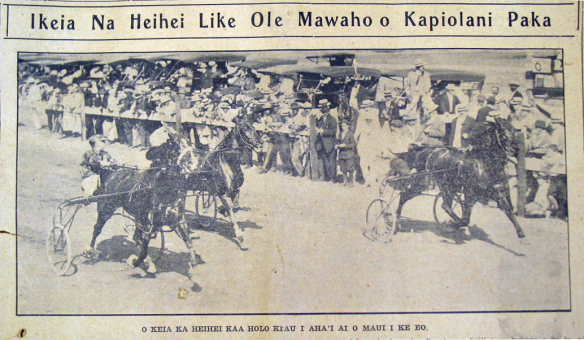 The Members of the Kaahumanu Society of Maui 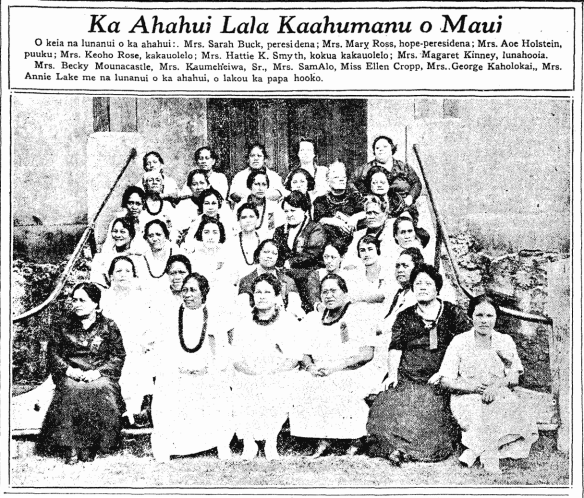 [Here is the original article that was commented upon by the Pacific Commercial Advertiser (1/23/1862).] 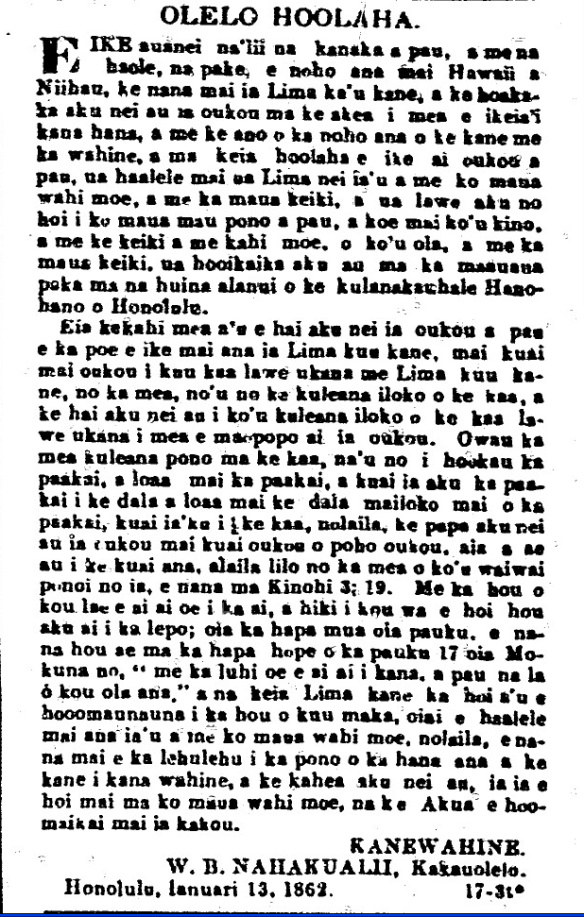 NATIVE LITERATURE—Some of the notices and communications published in the native newspapers are curious specimens. Here is one from the Star of the Pacific [Ka Hoku o ka Pakipika]:

NOTICE.—Know all men, chiefs, and common people, white men and Chinamen, stopping between Hawaii and Niihau [residing from Hawaii to Niihau], who have seen my husband “Lima,” this that I make know to you in the most public manner that you may know his ways and the nature of the relations existing between husband and wife, and by this notice you will all understand that Lima has forsaken me and our bed and our children, and he has taken all our property and only left my body, the children and the bed. To sustain myself and the children, I have been prosecuting with vigor the selling of tobacco at the corners of the streets in the Honorable town of Honolulu.

Here is another thing that I have to tell all of you who may see Lima, this husband of mine. Do not buy my hand cart from Lima my husband, because the right in the cart belongs to me, and I now make know my right in the cart, so that you may all understand. The right in the cart is in me, for I made salt, and sold the salt and with the money received from the salt I bought the cart, consequently I forbid you all to purchase or you may lose [or it will be your loss]; wait till i consent, then the sale will be effectual [only should I consent will the sale be effectual], for the property is really mine. Look in Genesis 3:19—”In the sweat of thy face shalt thou eat bread; till thou return into the ground.” That is the first part of that verse. Look again to the last part of the 17th verse of the same chapter, “In sorrow shalt thou eat all the days of the [thy] life.” This “Lima,” husband of mine, causes my eyes to weep [It is because of this Lima that I waste the sweat of my face], he has left me and our bed, consequently all of you look for the good (propriety) of these proceedings of a husband to his wife [so all of you, look at the treatment by this man of his wife], and i now call upon God to bless this all [and I call out to him to return to our bed, and may God bless us all]. 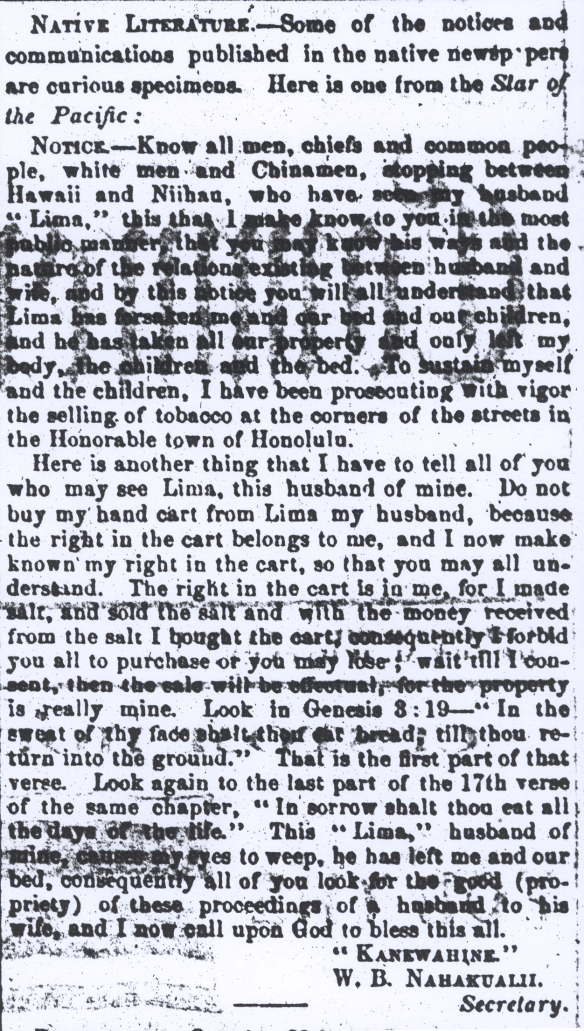