at the Kauaʻi Museum

[If you live on the island of Manokalanipo, or are visiting Kauai this weekend, head over to the Kauai Museum!] 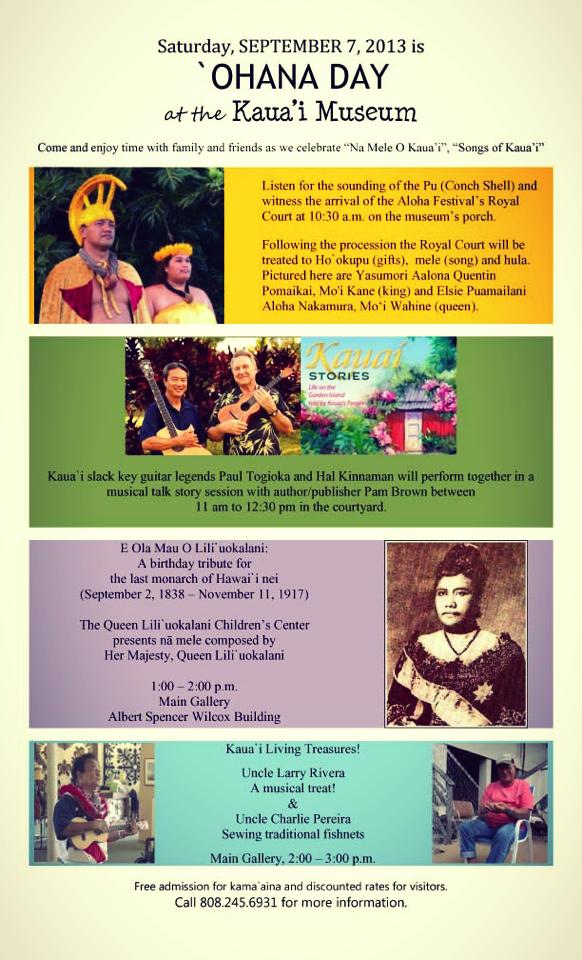 ʻOhana Day at the Kauaʻi Museum.

HE MOOLELO
—NO NA—

{Translated by a generous pen for the Pride of the Hawaiian Nation.}

To the Newspaper “Ko Hawaii Pae Aina:” My pen is a stranger to your straight borders and your wide columns of news: and at the request of your captain that I write a moolelo or kaao for our Pride, therefore, I have taken my pen nib to translate the story of the “Three Musketeers,” a moolelo that I used to read all the time in days gone by, and a moolelo that I believe will mesmerize those who love kaao, and they will read it over and over so that they can memorize it and tell it by heart. One of my schoolmates.

{O Readers, do be so kind as to forgive me for the names of the people in this moolelo; they are similar with the kaao of The Count of Monte Cristo.}

[The translation of Alexander Dumas’ “The Three Musketeers” began on 3/2/1878, and the last segment found is on 12/7/1878 (mid-Chapter XVI). I could find no explanation for there only being a quarter of the entire work.] 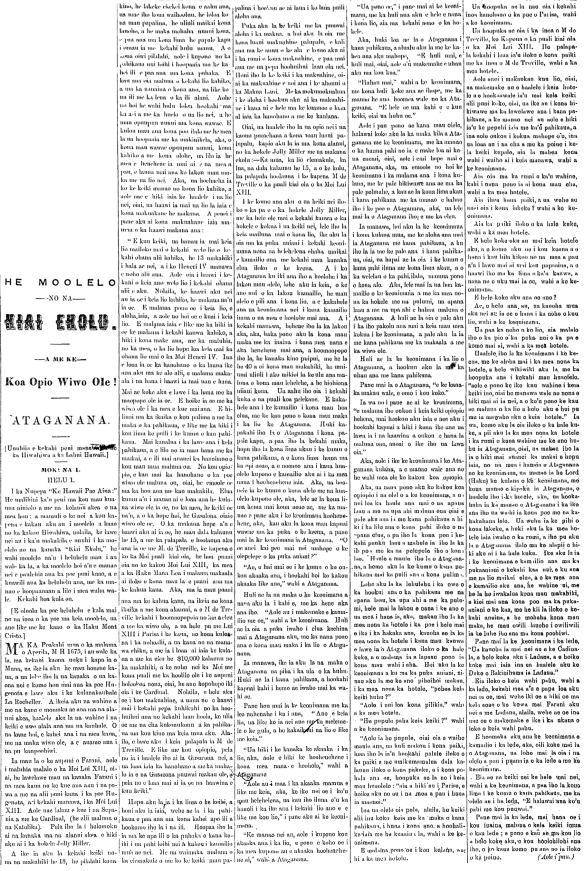 With heartfelt grief we put before you, our readers, news of the leaving of this life of the Honorable S. M. Kamakau, at 3 o’clock in the afternoon of this past Tuesday, Sept. 5, at his home on Emma Street.

As a result of his death, the nation of Hawaii is without a historian of this land, and an interpreter of genealogies of the chiefs. The alii genealogies of this archipelago follow his guidance.

He was a part of the board of commissioners to quiet land titles during the time of King Kamehameha III, and he was a commissioner of land surveying for many years, along with work associated with it.

He was an honorable member of the legislature of our kingdom; he joined this body six times to pass laws for this land; he was in 4 sessions under the Constitution of King Kamehameha III, and 2 under this Constitution of King Kamehameha V, and in this Legislative session, he was rightly chosen by his constituents as a spokesman for them in this session. But because of his infirmity, and his getting sick often, he did not sit in the seat of this district of Honolulu, to search for the good of the district, until he was freed from his weariness. Auwe, how sad! How pitiful!!

At 4 o’clock in the afternoon of this past Wednesday, a funeral was held over his body, from his home until the Roman Catholic Church, and from there to the cemetery of the Episcopalians at Maemae.

His procession was given honor by his fellow representatives, and the nobles of the Legislature, on cars, from the church and down Fort Street, onto King Street, and up Nuuanu Avenue until the cemetery. There were 118 people who accompanied his last journey in 31 cars. He has left behind on this side of the grave, a wife grieving over her lost husband, and a daughter mourning her Papa, and grandchildren bewailing their grandfather, along with the many friends reminiscing over him.