While the site was being dug, where the First National Bank [Banako First National] will be built in the future, at King and Bishop streets, there was found human bones and a poi pounder in the earth, but as to how those bones and poi pounder got there, that is something unclear being asked today.

At about seven or eight feet, these things were found by workers digging the dirt in the earth, at the area where the old fire station stood during the time of King Kalakaua. END_OF_DOCUMENT_TOKEN_TO_BE_REPLACED

The glowing fire on the Kalihi mountains Thursday night Feb. 21, was caused by workmen burning off the grass on the site of the new reservoir in the upper Nuuanu Valley. The fire could easily have been controlled in the first instance. As it was, it was allowed to run up a narrow ridge, and thence to spread along the flanks of the mountain until it became an extensive conflagration, destroying many vigorous young koa trees and persistently working itself down into the valley. On Friday morning, two teachers and about twenty of the largest boys in the Kamehameha School went up to the fire and after a vigorous battling with the dense smoke succeeded in hemming in the fire, and finally subdued it. The utmost care in such a dry season should be used in preventing the setting, much more the spreading, of fire in the grass and bushes above Honolulu. A few such fires would make it unnecessary to build extra reservoirs. 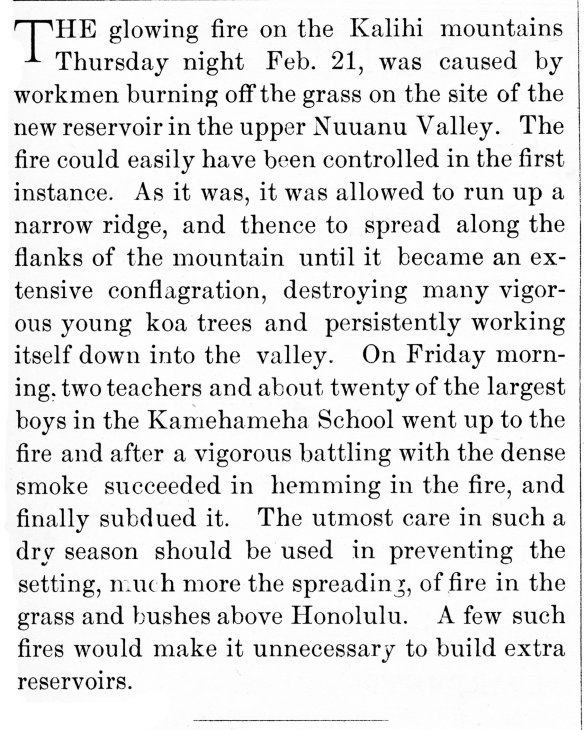 Birthday of the King.—The birthday of the King was celebrated pleasantly by his citizens, and the soldiers gave a commemorative banquet for the day at Huehue, and the Fire Engines of this town paraded, from Engines 1 to 4; along with other fine entertainment held that day. 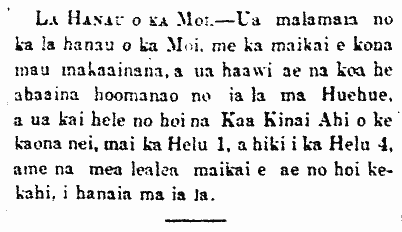 O Elele Hawaii, aloha oe. Tell the people and the other Islands of this Nation of the great devastation that happened here in Honolulu last night.

On the 6th of July, at perhaps 1 o’clock at night, three houses went up in flames at the North East corner of town, near the North side of Kaumakapili Church [not where it is located now]. One adobe house and two pili grass houses. The adobe house belonged to Kahehenanui, a member of the church and a widower. One of the pili houses belonged to Kauhema, a church member, and that new pili house was only completed some months ago. The other pili house belonged to Lio and was about three years old.

This is the Latest Fire Department Training here in Honolulu Being Tested with Progress Seen. 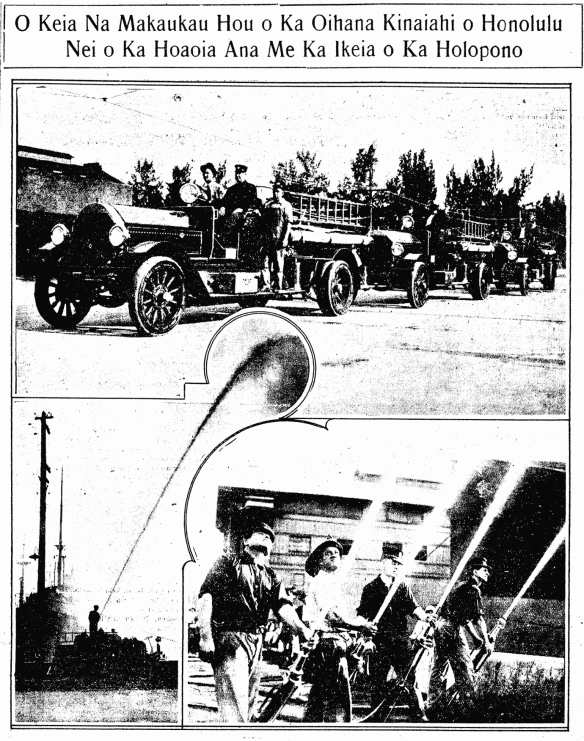 THE ANNUAL PARADE of the “Honolulu Fire Department,” happening on this coming Monday, the 12th. The Companies are asked to gather in the front of the firehouse NUMBER 2 at 10 o’clock in the morning, with their uniforms and engines.

Engine Company Number 1 of Hilo.—J. A. Kealohanui of Hilo, Hawaii wrote of the appearance of the cheerful boys of that Company on this past 4th of July. On the night of the third, they went to the house of Poonahoahoa [Thomas Spencer], and there they played their horns and drums, which woke him up, and he came outside and thanked them. On the next day, they went there again, and from there to the place of the Governor [Keelikolani] and gave her three cheers, and three for the Hawaiian Flag. She remarked that this is a fine Company. With them go our warm aloha. 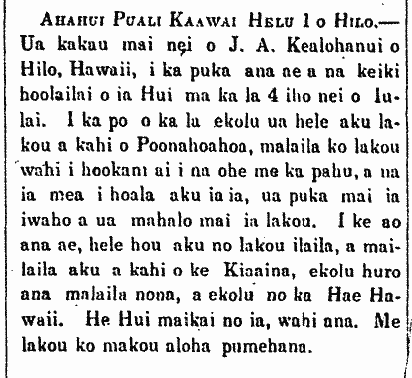