In the morning of Friday, the 7th of July, a girl of 3 or 4 years old was burned up by fire. The reason she was burned up was because she took a match far from the house, like about 7 fathoms [7 anana], and then she immediately struck the match and her clothes was lit by the fire, and she soon felt the heat and ran to the house with the fire burning all over her body, it was then that her grandfather saw this, so he ran  and tore off the burning clothes, and when he saw what the fire did to her body, it was very dreadful, and from that time to 4 p. m., she died. END_OF_DOCUMENT_TOKEN_TO_BE_REPLACED

The schooner Waiehu of the Pacific Navigation Company returned a few days ago from a special trip to the Island of Nihoa. When the schooner reached the Island she landed some twenty native passengers who remained on shore all night. END_OF_DOCUMENT_TOKEN_TO_BE_REPLACED

The Alii Liliuokalani enjoyed seeing the sitting young birds of all sorts. The alii climbed the ridges and descended the valleys until reaching an area where Loulu trees leaves grew deep green.  The Alii found comfort under its shade along with some of the people who got there. When the Alii was in repose, our famous photographer J. Williams was lively at work taking photographs [hoolele aka]. The Alii Liliuokalani ate her lunch upon the twisted surface of this Island. After the meal, the Alii made ready to return to the lee of Nihoa, and some others turned back as well. At that time the whistle of the ship was heard calling to everyone to return to the ship. END_OF_DOCUMENT_TOKEN_TO_BE_REPLACED

We received this letter below, and we were filled with pity for this tragedy encountered by our fellow man, and this is that letter:

“Aloha to you, O Fearless Holomua;

“Here is some news from here in the country.

“On the 31st of May, the home of J. K. Iosepa was consumed by fire; destroyed were the belongings inside of the house, the furnishings, the bed and other things, and the walls were burned, but the house remained standing as if it is made ready.

END_OF_DOCUMENT_TOKEN_TO_BE_REPLACED

On Friday the 19th of March, fire burned near Kahului kai and on the 20th and 21st, the fire burned greatly. END_OF_DOCUMENT_TOKEN_TO_BE_REPLACED

Aloha betwixt us.—I have some News I am sending to you, and it will be for you to spread it to all of the inhabited Islands of this Hawaiian archipelago. END_OF_DOCUMENT_TOKEN_TO_BE_REPLACED

Nearly burned up by fire.—On Christmas night, last Tuesday, after the candles were lit to light the chapel, a flame of one of the candles began to burn the clothes of a girl of the Choir, her name being Rosalia Tripp. The fire did not put much effort into its work, when it was put out by someone who was standing there.

Commotion-Inciting Fire.—The fire bells of Honolulu rang out in the evening of this past Friday, and off went the firemen; come to find out, the fire was the work of Miss Bingham folk. The large fire that they set was purportedly to honor the birthday of the King. If this was done with good intentions, why were the members of the fire department not informed prior to this? We saw in the P. C. A. paper a clarification of their apology to the fire department; END_OF_DOCUMENT_TOKEN_TO_BE_REPLACED

Alarm of Fire on Friday Evening.—Some young men, with more love of fun than discretion, made a bon-fire of some combustible materials in an open space makai of Kawaiahao. The bright light very naturally caused people in town to think there was a serious fire, and on the alarm being given, the Fire Department turned out with its usual promptitude, and ran towards the supposed conflagration, until it was ascertained to be a false alarm. As No. 2 was rushing along through Palace Walk with all speed on, the foreman, Mr. James McGuire, accidentally fell, and came near being run over. As it was, his trumpet was smashed under the wheels. Had he been killed, what regrets of these young men would have availed to compensate for the results of their thoughtlessness. Our fireman, or at least the heads of the department, should always be notified beforehand of any such bonfire demonstration, otherwise we may be some night in the position of the boy that cried “wolf! wolf!” when there was no wolf, and when the danger really came, nobody would pay any attention to his cries for help. 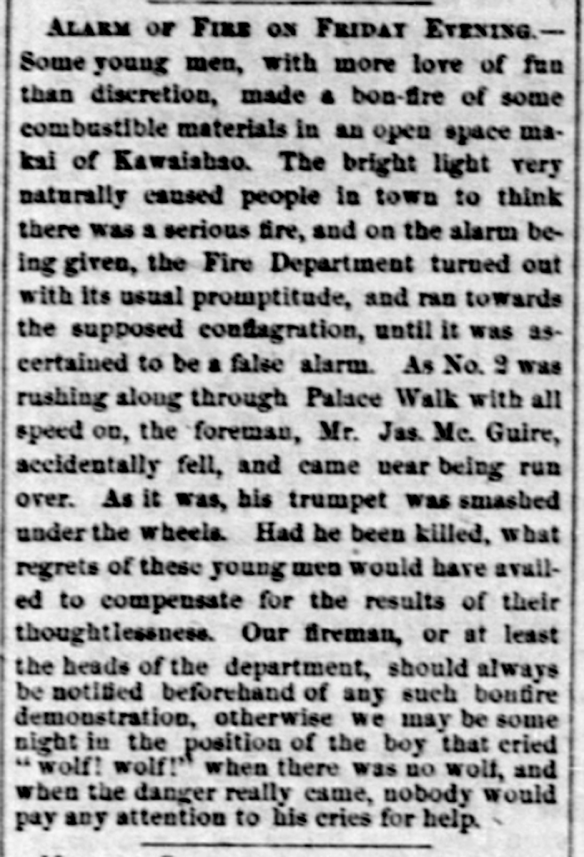