A. Gartley and C. H. Cooke Find Many Skulls and Skeletons at the Kamaiko Heiau in Kona, All in Good Preservation.

A Gartley and C. H. Cooke made a most interesting discovery in connection with the Kamaiko heiau of the district of Keei, in South Kona, on their recent visit to the Big Island. END_OF_DOCUMENT_TOKEN_TO_BE_REPLACED

OF THE
American Battleship Soldiers.

In the early morning of this Tuesday, some of the soldiers of all ranks from the warship were sent ashore, perhaps numbering three hundred when combined with the officers. There were two small cannons in this parade, and the soldiers were armed with weapons. The soldiers from the battleship landed at Kinau Wharf [uapo o Kinau], and marched on Fort Street and turned on Beritania where they continued marching until Richards and Beritania; the troops divided: some travelled on Richards Street and some on Beritania Street. They rested for a while, and then proceeded to drill. After drilling, they went back on Beritania Street and turned on Fort, until reaching the wharf.

Everyone was left puzzled by this action of the great number of the troops who came to shore. When we asked the Office of the American Consul directly, we were told that they landed to parade. When we heard this, our confusion was cleared, and so we report to our reader friends. The drilling here is part of their job. Let’s see what happens in the future.

Because of the amount of new items, some regular columns were put aside and the new things were put in their place.

[With the new editor of the Kuokoa, the paper’s focus changed. This short paragraph is all there was that i could find to explain the abrupt ending to the column. David Kanewanui, i am sure, would have completed the priceless fishing descriptions and would have gone on to do so much more. Don’t play with guns…]

THE many friends of David Kanewanui will learn with sorrow of his death, as the result of the gunshot wound received the evening of May 6. It occured early yesterday afternoon at the Queen’s Hospital.

David Kanewanui was born on the Island of Kauai twenty-six years ago. He graduated from Kamehameha School in 1894 and shortly afterwards accepted a position as teacher in the school at Olowalu, where he taught for two years. From Olowalu he went to the Hilo Boarding School, where he taught for another two years, coming from there to Honolulu to take a clerkship in the Auditor’s office.

Something over a year ago the Gazette Company was fortunate enough to secure his services as editor of the Nupepa Kuokoa, which position he filled with ability up to the time of the accident.

The popularity and circulation of the Kuokoa grew under his editorship, for his heart was in his work and he felt that he was doing something for his people. All subjects were handled for what he believed to be the best interests of the Hawaiians, and this being recognized, gave him great influence.

He was always courteous and pleasant and was a great favorite with his co-workers and with the young Hawaiians, many of whom looked to him for counsel and advice.

A fine baseball player, he was a member of the Kamehameha team and was captain of the Hawaiian Gazette Co.’s team.

The funeral, to be announced after the post-mortem, will take place from Kamehameha chapel.

THE EDITOR OF THE “KUOKOA,” DAVID KANEWANUI HAS PASSED.

[For the translation of this article, see the following post, from the mirrored article appearing in The Hawaiian Gazette, 5/23/1902, p. 5. The last paragraph however does not appear in the English and reads:]

With feelings of anguish, the newspaper Kuokoa, “The Foremost of the Hawaiian People,” [“Ke Pookela o ka Lahui Hawaii”] offers its never-ending aloha to the one who passed, David Kanewanui; and to his mother, his children who are left without a parent, and to the family as well who are overcome with mourning, our never-ending love. “His soul returns to heaven, and his body to the earth.” Aloha to this youth whose life in this world was taken so early. 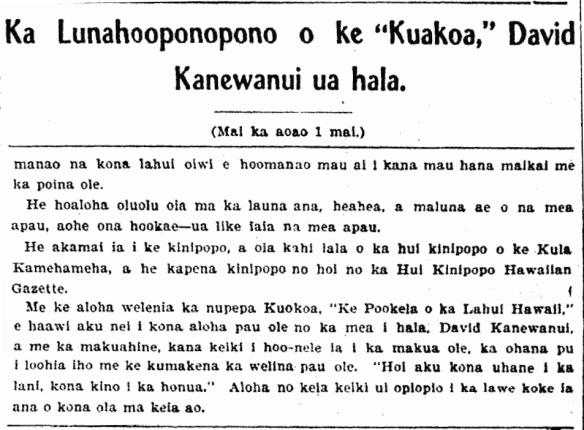 David Kanewanui, of the editorial staff of the Kuokoa, accidently shot himself last evening while handling a revolver which he didn’t know was loaded. The ball entered his cheek, so it is reported, and is now lodged in the back of his head, and to probe it at present is very much feared.

[It is best to check all sources and not to rely on just one article!]

DAVID KANEWANUI SHOT BY A GUN.

Because of a tragic accident of circumstance, the editor of this paper has been struck by misfortune, at the hands of one of his friends, Dan Io, on the evening of this Tuesday, at the club house of the boys of Kamehameha on Fort Street. The first report received by this office, the pistol bullet just grazed his cheek, and the injuries sustained were not that severe, but he was nonetheless taken to the hospital.

According to the latest report received by this office yesterday morning, it stated that the injuries sustained by Mr. David Kanewanui were very severe. Doctors Taylor and Wayson searched for the bullet that hit Mr. Kanewanui in the cheek, while progressing carefully, however they did not find a trace. This bullet hit the cheek bone, and perhaps travelled behind the head.

While David Kanewanui was enjoying his time with his friends, on the evening of Tuesday, May 6th, at the Boys’ Club of Kamehameha School on Fort Street; the gun with the evil bullet was being played with. Mr. Kanewanui entered from another room, and soon thereafter, this Mr. Io shot, but the gun did not fire. After David stepped outside, this Mr. Io aimed that gun that did not fire, but the strange thing is that the gun did fire, and David Kanewanui was shot by a bullet from the pistol.

Mr. Kanewanui stated that this shooting was not malicious, but it was an unexpected accident; therefore, that gentleman to whom belonged this evil lead, was saved. Mr. Kanewanui will perhaps spend ten days in the hospital, whereupon he will return once again to this office.