[Hiiaka and Wahineomao folks come upon a halau filled with men, women, and children, at Wailua Iki. The activity within the halau was hula.]

While they were standing, those inside were dancing hula. The hula being performed at that time was a hula olapa. When they were at a break, Hiiaka chanted, for she saw her cousin, Kapokulani, sitting amongst the verdure. Kapo saw their young alii and her tears began to flow.

A Kalahale is the wind of Haena

A Limahuli is the wind of Haena

A Kilauea is the love-snatching wind of Lohiau in Haena

THE STONE FISH GODDESS “MALEI” TO BE RETURNED TO MAKAPUU

Hawaiians have not forgotten the story about the stone goddess called “Malei,” a stone deity cared for and worshiped by the Hawaiian fishermen in the olden days; the great fish that the stone deity always brought to shore was the uhu, as is seen in the story of Hiiaka:

[There are the uhu of Makapuu which swim in procession,
Fish of Malei that dwells in the rising winds,
In Koolau lies the sustenance for the unfamiliar travellers,
Hiiakaikapoliopele prays,
O Malei, welcome us in love; let us weep!]

END_OF_DOCUMENT_TOKEN_TO_BE_REPLACED

A Hawaiian Legend by a Hawaiian Native. A Legend of the Goddess Pele, Her Lover Lohiau and her Sister Hiiakaikapoliopele.

The crater of Kilauea on Hawaii, is the residence of the Goddess Pele. She had eight sisters, all called Hiiaka, with some distinguishing ending, as Hiiaka-noholae, (Hiiaka living on the headland), Hiiaka-wawahilani, (Hiiaka the heaven breaker,) Hiiakaikapoliopele, (Hiiaka in Pele’s heart) etc. The latter commonly called the Hiiaka is the heroine of this legend. Pele had also several brothers Kamohoalii, Lonomakua, Lonoonolii, etc.

All her brothers and sisters were subordinate to her, but Kamohoalii was her favorite brother and Hiiakaikapoliopele the favorite sister. Tradition is not very explicit as to the source of Kamohoalii’s power, but he has always been regarded as the very sacred royal brother of Pele. The brothers and sisters seem to have had great respect foreach other and never trespassed on one another’s privileges, or interfered with each other ‘s actions. Uwekahuna the high bluff of the crater walls beyond the sulphur banks is supposed to contain a large cave, his dwelling, and the bluff is known as “Ka-pali-kapu-o-Kamohoalii” (the tabu cliffs of Kamohoalii.) Smoke from volcanic fires has never been known to be blown against them. True believers stoutly insist that smoke could never by any possibility bend or be blown against it, as that would be a gross violation of the royal privileges of the sacred brother. END_OF_DOCUMENT_TOKEN_TO_BE_REPLACED

When it was made known that Lava was erupting once again, along with it came the painting done by our good friend, the Hon. J. Nawahi; seen is the fiery red from Hilo, lighting up the walls of the heavens; and that painting can be seen in Whitney’s [bookstore] window. But this past Thursday, our famous seer artist did a painting of the fires of that woman of the pit, with the many Hiiaka aumakua igniting that fiery hot imu. Perhaps this is what some of our readers are saying; “the lava has reignited because of the aumakua;” that is ignorant. See this painting right outside of the printing office of the Pacific Commercial Advertiser [Kalepa].

[After that Antique Roadshow episode in 2007, nearly everyone knows about that painting of Hilo done by Joseph Nawahi now hanging up at Kamehameha Schools. I believe that these two however are not known today. Anyone have any ideas?] 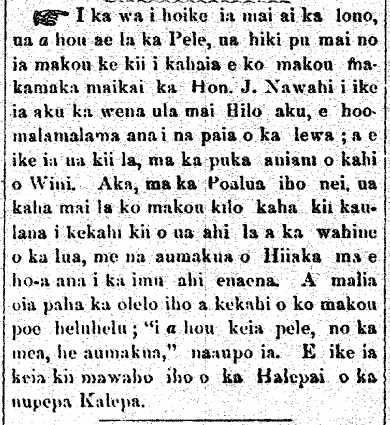