The appointment of Mr. Kauhi to be Sheriff for the District of Ewa is very characteristic of the Provisional Government. Because Mr. Kauhi has sported a blue annexation badge he has been considered fit by the Attorney General to hold the responsible position to which he has been appointed. The blue badge has evidently made Mr. Smith forget that the honest(!) and super—virtuous Legislature of 1888 expelled Mr. Kauhi who was the member from Ewa for being convicted of being a bribe taker—but perhaps bribe-taking is not considered a sin among the P. G. rulers and not considered a bad quality for a police officer. We now fully expect to see Mr. W. O. Smith pitchfork that other honest (?) Hawaiian Mr. J. W. Kalua into office—say as judge for Wailuku. “Birds of a feather flock together” seems to be a true proverb as far as our missionary government is concerned.

[In the article, “BLOUNT AT HAWAII” printed on the front page of the Chicago Daily Tribune on 4/6/1893, mentioned is a dark-blue ribbon with the words ANNEXATION CLUB being worn by the members of said club to present themselves to James Blount.]

ASSISTANCE WANTED FOR THE HOSPITAL.

Because of a shortage of funds at the Kauikeolani Children’s Hospital, everyone living in this town is asked to give their assistance, as they are able, as per a flyer composed by the trustees of the hospital by way of W. O. Smith, the treasurer, and E. A. Mott-Smith, the chairman of the house committee.

From the inception of this children’s hospital until this past September, the number of patients hospitalized there reached about 1812, and most of them were in great difficulty.

With the proceeds, the expenses to run this hospital can be paid off until the end of the year; there is no way that there would be enough other than through receiving contributions from the public. 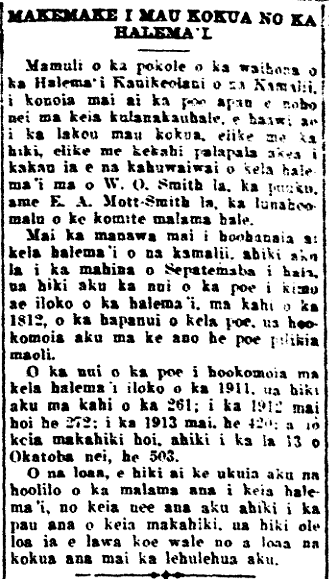 “The Queen never will be restored to the throne, for she will be shot within 24 hours, and every man who takes office under her will be shot also—we have men secretly sworn to do it.”

Such was the remark made to the writer by a brainless young sprig of the “citizens reserve,” such is the tenor of numerous open threats of the canaille composing the annexation club, the citizens reserve and the American league organizations that pretending to be patriotically American are in fact veritable nests of socialism, fenianism and mafia.

To their shame be it said that these mafias are organized under men calling themselves Americans, men who heretofore have been regarded as respectable and intelligent citizens: Hatch, Castle, Wilder, Jones, Smith, McGrew, Emerson, and so on, whose names will pass into history as knavish pirates in a plot to steal a nation and compel America to receive the stolen goods.

A recent article in the Holomua warned that a wave of insanity had struck Honolulu in accordance with a well known theory of cycles. The malady appears to be growing worse, for certain it is, that all the men and women concerned in the overthrow of the Queen, the terrorism and misgovernment of a P. G. military despotism, and the present display of hostilities against the United States, all act like people demented. END_OF_DOCUMENT_TOKEN_TO_BE_REPLACED

It is painful to see the cemetery of King Lunalilo at Kawaiahao, showing that it is not remembered, for it is overgrown by weeds. In its wealth, the crypt where his body is laid to rest was left to waste by his Trustees, along with Wile Kamika [William Owen Smith] who feasts off of his pay from the trust. This is proof of the missionary descendents’ [welo mikanele] contempt for the Alii of Hawaii, the people who made them wealthy and also their parents and grandparents.