This commemorative plaque is in front of the Hale Paʻi at the Hawaiian Mission Houses in Honolulu. Tomorrow morning they are having a historic reenactment of the 1822 press pull in person and livestreamed as well!

For more information on this and other bicentennial commemorations they are holding this year, click on the images below.

This estimable lady, wife of Rev. E. S. Timoteo, traveling evangelist of the Hawaiian Board, having received a stroke of paralysis, breathed her last on the 6th of September, being then 56 years of age.

Mrs. Timoteo was born at Puakea, Kohala, island of Hawaii, August 9th, 1852. In her girl-hood she attended the government or common school of her native village, then taught in the Hawaiian language.

At 15 years of age, she entered the Waialua Boarding School for Girls, known as Haleiwa, which was taught by Mr. and Mrs. O. H. Gulick, and which had an enrollment of 100 girls, 80 of whom were at one time under their roof.

Returning to her home she was married to Rev. E. S. Timoteo in 1871. With her husband they entered the Training School of the North Pacific, then under the guidance of Rev. B. W. Parker, and later taught by Rev. and Mrs. Dr. C. M. Hyde. In 1880 Mr. Timoteo accepted a call to the pastorate of the Waialua Hawaiian Church [Liliuokalani Protestant Church]; which position he filled, most creditably, for about 18 years. In 1897 Mr. Timoteo was called to the pastorate of the Kaumakapili Church in Honolulu.

In August, 1901, he was called by the Evangelical Association of the Islands, to be a traveling evangelist, and since then his wife has accompanied him upon many of his circuits doing a most helpful work in aid of her husband’s mission of reconciliation and reclamation of disaffected and backsliden Churches and Church members.

Mrs. Timoteo has always been a worthy and true helpmeet for her husband, setting a bright example to the women of every race, and every station. She was mindful of the advice of the Apostle Peter to wives, “Whose adorning let it be the hidden man of the heart, in that which is not corruptible, even the ornament of a meek and quiet spirit, which is in the sight of God of great price.”

[This publication, The Friend, is word-searchable, and can be found on the Mission Houses Museum website here.]

This is a nice bibliography of Hawaiian-language material written between 1822 and 1899 compiled by Bernice Judd, Janet E. Bell, and Clare G. Murdoch in 1978. What is nice about this is that it lists where known copies at the time were located. Unfortunately, this online copy is not easily searchable like the 1869 Bibliography of the Hawaiian Islands in the last post. If you do a search, you will only be pointed to the word in the typescript, but if you want to know where it appears on the image of the original, you will only be pointed to the page where it appears. There is supposed to be another copy on Project Gutenberg, but the file seems to be corrupt. On Project Gutenberg, you would be able to do a word search against the image of the original with it highlighting the word or phrase searched for. 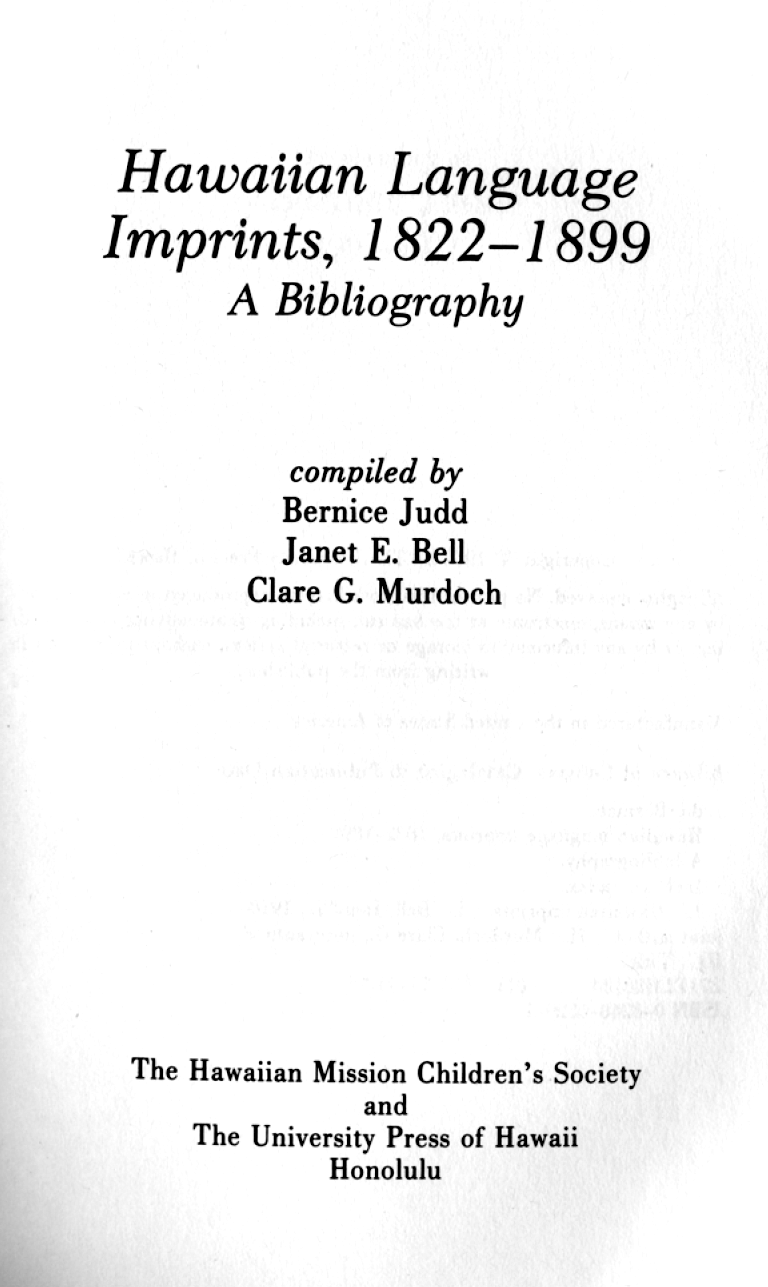 Enlarged from the Edition of 1937

[This is a great reference if you are looking for information on Protestant missionaries to Hawaii nei. It was put out by the Mission Children’s Society. Unfortunately, it seem that the list of missionaries to Micronesia and the Marquesas was left out of the publication to make room for the index.

I am not sure if it still available for purchase at the Mission Houses, because I cannot find it online, as they seem to be doing an overhaul of their gift shop portion of their online site, which can be found here.

And don’t forget that this is a useful list when researching missionaries!]

“Better that Ten Guilty Should Escape, than that One Innocent should Suffer.”

One innocent Hawaiian, named Heleiki, came very nearly being hung in San Francisco, under the authority of the Supreme Court of the United States. The report of his trial and release have already been published, but the case is one which presents many interesting and important points of consideration for judges, lawyers, witnesses, philanthropists, and all who can employ the sentiment of the old Roman poet, Terence: “Whatever concerns humanity, concerns myself.”

In referring to this case, we shall allude to events which transpired even before the murder of Capt. Hussey, of the William Penn, off Strong’s Island, on the 6th of November, 1852. In October of that year the schooner Glencoe was cut off and burnt, and every man killed, at Ebon, one of the Marshall Islands. The natives disposed of some of their plunder and money taken from the Glencoe, to Capt. Hussey. A few days subsequently, Capt. H. was killed by a native of Oahu, one of his sailors. By referring to the Friend of July, 1853, we there find published a letter written by Dr. Gulick, and dated “Ascension, Feb. 19, 1853,” and from this communication we quote as follows:

“It is reported that a California schooner has been cut off in the Radack Range, at Boston or Coville (Ebon is the native name) Island, and a whaleboat’s crew who arrived, too weak to walk, were also killed, as they crawled up the beach. * * * Several whaleships have since taken from that island considerable sums of money. Capt. Hussey, it is said, received over a thousand dollars. It was for this money that one of his crew, a Oahu native, killed him. That native has since been killed on Simpson’s Island, by one, it is said, whom he himself was about to shoot. Thus do ‘the dead bury their dead,’ and murderers execute murderers.”

Now, after nearly ten years have rolled away, certain persons belonging to the William Penn inform against the innocent Heleiki, and he is thrown into prison in San Francisco. Most providentially for the interests of justice, and the fate of Heleiki, Dr. Gulick was passing through San Francisco, soon after the man’s arrest. He visited him in prison, and became throughly convinced of his innocence. He now set to work with the spirit of a Howard. But we cannot go into a full detail of particulars, although they deserve to be collected and put into some permanent form for preservation. We hope when Dr. Gulick returns, that he will do it. Suffice it to say, that through the courtesy of United States Judges, the ability of able lawyers, the correspondence of consuls, the collecting of evidence, and, finally, the visit of a deputation of witnesses, sent to San Francisco by the Hawaiian Government, the man Heleiki is fortunate enough to escape without being hung and has returned to Honolulu.

This case is most interesting and important for several reasons:

1. The man’s life is saved, and the innocent escapes a felon’s doom, on the evidence of men belonging to a copper-colored race! Mark you, there are some parts of the professedly civilized world, where the testimony of His Honor Judge Ii would not have been admitted. It is only recently that his evidence would have been admitted in the State Courts of California; but to the honor of the U. S. Court, there was no question upon this point.

2. The Hawaiian Government has shown a magnanimity and zeal in behalf of one of its humblest subjects, when falsely accused in a foreign land, worthy the most enlightened, most civilized, and most Christian nation on earth. We feel proud to dwell under its broad Ægis. Here let us remark, that while citizens of the United States may feel proud of their Supreme Court, and Englishmen may feel proud of their high Courts, so may Hawaiians be equally proud of their Supreme Court, presided over by such judges as Chief Justice Allen, Judge Roberson, and Judge Ii—the latter having just returned from his most honorable mission to California.

3. This is a case which cheers the heart of the missionary and philanthropist.

4. This is a case which should teach witnesses that they ought to be very cautious how they swear as to the identity of a man, after ten years have elapsed.