[It is interesting that he still used “kuu wahine”.]

END_OF_DOCUMENT_TOKEN_TO_BE_REPLACED

Her Highness Princess Ruth Keelikolani seemed to have always been in my life.

When she came to stay at Wailuakio (Palama), she would always spend the night in my mother’s home. For her retinue was large and my mother’s home was a convenient place to entertain them all. END_OF_DOCUMENT_TOKEN_TO_BE_REPLACED

VISIT TO THE MAORI KING MATUTAERA.

The correspondent of the Southern Cross at Waiuku sends the  following description of a visit recently paid by him to the quarters of the Maori king Matutaera, in company with two visitors from the Sandwich Islands:— END_OF_DOCUMENT_TOKEN_TO_BE_REPLACED

Pertaining to Hoapili and Kiliwehi—What we reported earlier is true, that Hoapili folk are in New Zealand; and we published this some months ago because in some newspapers from New Zealand, we saw of his asking to speak with the King of New Zealand; END_OF_DOCUMENT_TOKEN_TO_BE_REPLACED

Hoapili W. Kaauwai and Kiliwehi.—We are curious about the attendants mentioned above, because they have not returned from the trip of the Queen, whereas they were two who joined in on the journey of Kaleleonalani when she set off for the continents of the East and the West. Therefore we question and ask, where are those two? Maybe they are staying on land or gone astray at sea? We hear a lot of stories, yet we will not lose our head and spread them at once, because here we are in Honolulu where it is said, “speculate this way, speculate that way”.¹ Tell us, O Alii and makaainana loving Hawaii.

¹”Nunu aku, nunu mai” perhaps is a variant of “Nune aku, nune mai”, and is a saying associated with busy Honolulu. Is there anyone with more information on this saying?

[There is much written about the happenings between Hoapili and Kiliwehi.]

On Wednesday, the 5th of November, the breath of this descendant of chiefs left her, after being sick for a long while. Perhaps some four months ago, she travelled to East Maui, and a short while after she reached there, it was heard that she was ill, and she remained in this state until returning to Honolulu, and at the request of her friends, she was taken to the Queen’s Hospital. There, Dr. McKibbin [Kauka Makibine], said that she had sickness that was curable if she followed closely the Doctor’s advice. She remained at the Hospital for a number of weeks, and when it was seen that she was becoming very weak, she was taken by her royal companion, Mrs. P. B. Bishop, to live with her these past days, and this was Kiliwehi’s last home where she dwelt until her death. This young chiefess is indeed one of the descendants of rulers, according to what we hear, of Kamehameha of Maui, who was called Kamehameha Ailuau; and not as was mistakenly heard, that she was a direct descendant of Kamehameha I. She died at the age of 33. At her funeral, she was escorted by her friends and her husband [Hoapili Kaauwai], and at the edge of her grave, her husband heart let out its regret with:

Adorned by a lei of pride
In friendless lands,
The link that has been severed,
From the companion—O Hoapili—e,
Much Aloha.

Last Saturday, brought to Honolulu from Wailuku was one of the royal women who had gone on a tour of the world, that being Mrs. Kiliwehi Hoapili Kaauwai, with an ailing body, and here she is now at the Queen’s Hospital being treated. She had many a friend when she was in good health, but now, she perhaps is lacking in this medicine. 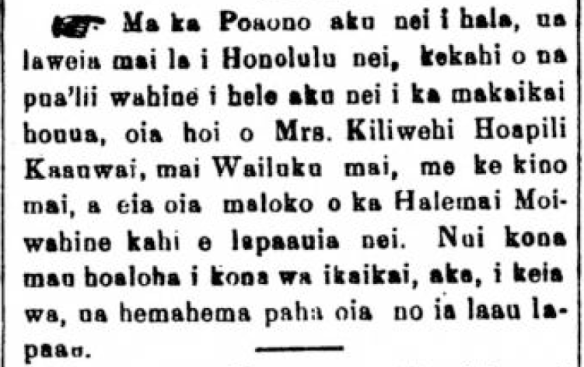