FRAGRANT MEMORY—In memory of the late Mrs. C. M. Cooke, who founded the Honolulu Academy of Arts 25 years ago, this group of Hawaiian women will sing and play “Haaheo Kilohana i ka Laʻi” at tonight’s opening of the Academy Members’ Annual Show from 8 to 10. The song was composed for Mrs. Cooke by Mary Jane F. Monatno. It was set to music by Mrs. Bina Mossman. Shown above are: left to right, Louise Akeo Silva, Flora Hayes, Julia Nui Hoopili; back row, Joanna Wilcox, Kuualoha Treadway and Bina Mossman.—Academy photo.

Mrs. Maryjane Montano wrote the words of the name song of the Honolulu Academy of Arts, which was dedicated to Mrs. C. M. Cooke, it was pointed out today. Mrs. Bina Mossman set the words to music and sang the song on the opening day. She is repeating the song this afternoon at the 10th anniversary program. END_OF_DOCUMENT_TOKEN_TO_BE_REPLACED

A feature of yesterday’s birthday luncheon of the Outdoor Circle was the reading of a Hawaiian poem, written by Mrs. Mary Jane Kulani F. Montana [Montano], author of the verses of “The Old Plantation,” and dedicated to the Circle. The original verses and an English translation were read by Mrs. Webb. These were:

He inoa no Julia Afong.

[This name song (mele inoa) for Julia Afong (daughter of Chun Afong and Julia Fayerweather) is another composition by famous composer Mary Jane Kulani Montano, sister of Julia Fayerweather and therefore aunt of Julia Afong. Laimi it seems was the name of the family home on Nuuanu Avenue.] 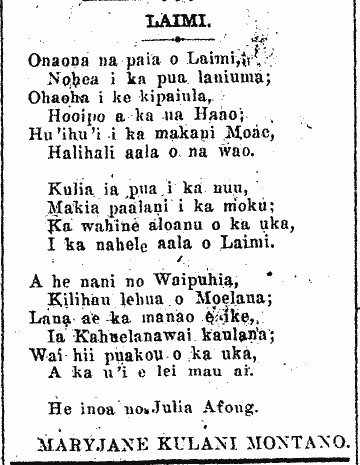 [This is yet another composition by Mary Jane Montano, although not widely known today. This was composed in honor of the Hawaiian boys who were fighting in World War I, and alludes to the Battle of Verdun.

In the Hawaiian-Language Newspapers, you can find countless examples of Hawaiian boys going off to war outside of Hawaii nei, starting with America’s Civil War, and on down to the present.

THE BELOVED YOUTH OF HAWAII.

There in the beauty,
The glory of France,
Are the beloved youth of Hawaii,
There at Verdun,
On the exalted trail,
At the point of the artillery,
They are there, they are there,
The young fighters of America.

Carrying aloha,
For peace,
Fighting the fight,
There in France,
On the exalted trail,
The marching soldiers go forth,
They are there, they are there,
The beloved youth of Hawaii.

The news has spread,
The good has been seen,
The soldiers are seasoned,
Fearless warriors.
For the eagle,
For the red, white, and blue flag.

DON’T DECREASE THE PAY OF THE TEACHERS.

To the Editor of the Kuokoa, Aloha oe:—Please allow me some space in your newspaper for my humble thoughts dealing with the salary of teachers and the age at which children of the public should attend school.

It is wrong to cut the teachers’ pay because a well-educated teacher has a gift from God; it is not something readily gotten. And our children will be hurt should we let those teachers go and employ teachers for little pay.

The children of the people should be enrolled in school when they turn six (6) years of age. For there are many women who assist their husbands by endeavoring to take care of the many duties for the good of the family. And they are not able to care for and keep their children from the harm of the streets! As for the Chinese and the Japanese, they are fine. They have schools and their children are kept from wandering about.

I beseech all of you leaders who make Laws and who regulate public funds, do think carefully about these thoughts written above.

For knowledge is the backbone of man and his nation; it is the basis for fame and wealth.

Consider that the income of the majority of the Hawaiians is limited, and they are counting on the light of education for their children. The plantations of the old days are not to be reached out for, for those days are past. So all of you, please put effort into the schools, and don’t feel hesitant in investing more.

[Times have changed. Hopefully we learn from the past…

[Anyone know of the relationship between these two women?]

A NAME SONG FOR THE MAMAKAKAUA ASSOCIATION.

[This composition is by the same composer who wrote the lyrics to songs like “Old Plantation”. This here describes the mele as a inoa [name song] for the Ahahui o na Mamakakaua, or the Daughters and Sons of Hawaiian Warriors. I just wanted this to be findable online, so here it is without any English gloss…]