This high island is similar to Hawaii being that it is a high mountain, but it is different in that there are trees that grow from the mountain peaks all the way to the ocean, and there are trees that grow in the ocean. There are three kinds of trees growing in the ocean. I brought from Ponape 200 mangrove plants. But they all died. If we really want to bring in that plant, it should be brought in by seed, and planted extensively; thousands in Waikiki, Ewa, Waimea on Kauai, on Maui, Molokai, and Hawaii; this tree reaches from twenty to forty feet high, and is good as lumber for house building and for firewood.

[This appears in a description of travels of the Morning Star to Micronesia, written by Jeremiah E. Chamberlain, the representative of the Board of Hawaiian Missions.] 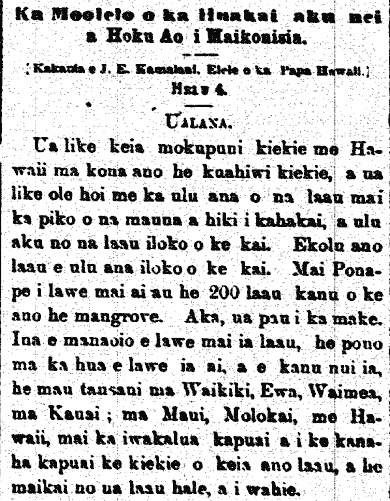 Here is something that is much sought after by the producers of sugar. Bags that are woven with strips [ko-ana] of bulrush [akaakai] or lauahala perhaps, to put brown sugar [ko-paa eleele] in and ship to Australia or America. The previous week, a schooner brought 15,000 bags of this type from New Zealand, and the haole traders greatly appreciated them. The length of the bags are 33 inches, and 17 inches wide. If bags like these are woven here at a reasonable price, and a thousand are made, they will be sold out in a year. END_OF_DOCUMENT_TOKEN_TO_BE_REPLACED

Lanai i being purchased for $600,000,000, to carry out the Planting Pineapple Business there. It has been confirmed that there is about 6,000 to 10,000 acres suitable for planting the fruit.

Last we we were shown by Kalua, a coconut-eating crab, which he found in the yard of the Senior Alii C. Kanaina, in a deep hole dug into the earth. Its whole appearance is strange indeed. Its legs are huge, and its pincers are scary to look at, and its whole body is remarkable. Where did it come from? END_OF_DOCUMENT_TOKEN_TO_BE_REPLACED

Prof. Joseph F. Rock, head of the botany department at the College of Hawaii and author of the book, “Indigenous Trees of the Hawaiian Islands,” will return to Honolulu tomorrow on the Shinyo Maru, according to advices that have been received here.

During the summer months the professor has been in the islands of Java and Sumatra and in the Philippines collecting specimens and doing research work in his line. He left here about the middle of June. 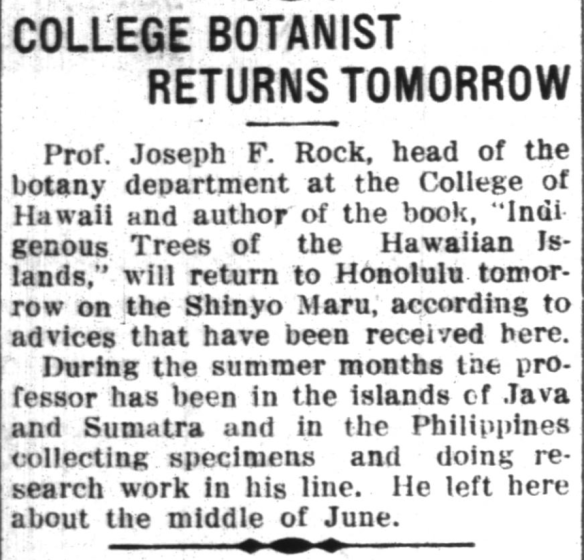 HAWAIIAN PINEAPPLE IS HIGHLY DESIRED AT THE EXPOSITION.

There is much desire for hala kahiki from Hawaii at the exposition being held in Seattle, because on the ship that just left Honolulu for San Francisco, five-hundred boxes of pineapple is being sent to be sold at the show grounds.

One hundred pineapples are being sold on the average each day, but it is believed that not everyone visiting has tasted the pineapple from Hawaii; and if they receive those added boxes of pineapple, it will supply the visitors for a good amount of time.

From now on, the pineapple planters will prepare for orders, and they are able to supply large amounts of pineapples that will be desired.

Brought over by Jim Davis, the supercargo [kupakako] of the steamer Upolu, was a stone awa bowl that has a god image [kii akua] on its side. It is estimated to be 150 years old. This kanoa was found in the earth of Halikiki, Kona, Hawaii, a few feet underground. It was found when the land was being worked to plant coffee, and some people said there was a house foundation there in the olden days. There are many who say that a kanoa carved out of stone is very rare, and that most seen to this day are made from wood. This kanoa will be taken to the Bishop Museum after the one who it belongs to gives his consent.

[There was also this story on a stone kanoa at the Museum. And this did not i hear make its way to the Bishop Museum…]

As long as Minister Damon [Damana] has been in possession of Moanalua, his desire to beautify, ornament, and to clean up the area has been increasing.

He is planting roses and vines of all sorts and these are growing and increasing inside and outside of the glass houses with their blossoming fragrant blossoms.

There are many people constructing new roads; one will be for the island which will be close to the house and one will go up to Alia Paakai.

Its beauty is intensifying every day. Mr. Damon will continue to bring in plants and fruits from other lands to adorn this Home of his, and it will please the eyes of those who visit.

The departure of the S. S. Australia for the Coast was delayed until nearly 1 o’clock on account of the late arrival at the Oceanic wharf of articles to be exhibited at the Midwinter Fair in San Francisco, which has already opened. Among the numerous exhibits to be seen on the steamer were boxes of large and small coffee plants, boxes of large and small tea trees, brought from Hamakua, two wooden tanks containing different varieties of fish, including eels, a small shark, squid and crabs. The last two species were in one tank, and it is believed there will be a circus started between them when the aquarium is shaken up. There were two monster bullocks in stalls lashed near the stern. Kapahee, the famous surf rider, with his board, his wife and son, three hula girls and four other natives comprise part of the Hawaiian exhibit. Kapahee will give exhibitions in surf riding near the Cliff House, and if the water is clear he will dive and kill fish with a spear he has taken with him. He will also ride the bullocks. The girls under the management of D. Kaahanui will dance a mild hula-kui, while the others will assist about the grounds. Mr. L. A. Thurston superintends the exhibit.

Mrs. J. K. Ailau will make a first-class exhibition of Hawaiian curios at the fair in connection with the Hawaiian exhibit. She has taken with her four young ladies to act as saleswomen.

Messrs. Samuel Parker and A. P. Peterson were passengers on the Australia for the Coast on business bent.

Mr. W. P. Boyd, U. S. Vice-Consul-General, and wife were also passengers. They have gone to spend their honeymoon in the States. Both were gaily bedecked with leis and evergreens.

Mrs. and Miss Gerber, with their friend Miss A. Cahill, who lately returned from the Volcano, were among the departing throng. Mrs. Gerber and daughter left for home after a short and pleasant vacation on the islands.

Nearly all the passengers were covered with Hawaii’s tropical adieu, viz., wreaths and flowers. The P. G. band played previous and up to the departing of the steamer, and the scene on the wharf was one of bustle and excitement.