Without knowledge of the Government, and with agreement from the American Minister [Stevens] not to land the troops from the warship while the Government is prepared to keep peace; the American Minister nonetheless ordered the troops of the Boston to be  put in service. This would appear as if it is an attack, and should the government [provisional government] listen to the truth of these actions by its official, this will be something that it will condemn.

At nine o’clock this morning, and since the editorial matter of The Liberal was in type, the United States flag was hoisted upon the Capitol by Captain Wiltse of the U. S. S. Boston and a United States Protectorate was proclaimed over the Hawaiian Islands in the name of the American Government, pending negotiations now going on at Washington. The troops saluted the American flag first and immediately thereafter faced about and saluted the Hawaiian flag. The following is the text of the proclamation:

TO THE HAWAIIAN PEOPLE.

At the request of the Provisional Government of the Hawaiian Islands, I hereby, in the name of the United States of America, assume the protection of the Hawaiian Islands for the protection of life and property, and occupation of the public buildings and Hawaiian soil, so far as may be necessary for the purpose of specified, but not interfering with the administration of public affairs by the Provisional Government.

This action is taken pending, and subject to, negotiations at Washington.

Envoy Extraordinary and Minister Plenipotentiary of the United States.

Approved and executed by

THE TROOPS OF THE AMERICAN WARSHIP.

Here on land are the troops from the warship, as they go around town with their guns and their ammunition belts. They came ashore this past Monday. Let them be to enjoy themselves upon the blessed soil of Hawaii and look to the day when they will see that Hawaii is on the side of peace.

[This set of newspapers is not available online yet, so I will try to make a copy of the original article from a microfilm as soon as I can.]

That Wicked Eel Has Left.

On this day, the American warship Boston left the harbor and the land of which it assisted in persecuting and stealing its independence with the missionary descendants from Boston. Where could its previous captain [Gilbert C. Wiltse] be resting? According to the Calvinists, he is in Heaven, and perhaps the ship will go to fetch him.

Of What Are They Afraid?

The Advertiser this morning says: “The landing of troops from the Boston furnishes a guarantee that the persons and property of American citizens will be safe from violence, etc.” What are those who claim to be American citizens afraid of? From what quarter is violence expected? None whatever, except like Banquo’s ghost, from the “deep shadows of cowardly and guilty consciences.” It would be well under present circumstances, for the Advertiser to come forward and state to the public who were the ones that forced the late King at the point of the bayonet to break his oath and forswear the late constitution tha he had sworn to uphold?

We have received news that the Ministers of the Queen sent their written protest to the Minister of the United States for his ordering the landing of the armed men from the man-of-war Boston on the evening of this Monday notwithstanding that there was peace on land. And this objection was jointly supported by the Commissioners of the Nations of Great Britain, France, Portugal, and Japan, by them signing a document opposing this action over these reasons—(1), Because of the agreement under law between the Nations to give prior notice. (2),  There was no cause to land the troops being that there was peace.

This is the Law, that being there is no other Nation that has any right to land its troops while there is peace; were there internal problems, but only if there was an uprising or a civil war, only then could there be troops landed to watch over and protect the safety of their citizens as well as their property.

Without knowledge of the Government, and regardless of the agreement of the American Minister that the soldiers from the warship would not come ashore, being that the Government was prepared to uphold the peace; the American Minister ordered the soldiers of the Boston to to take control. This is an apparent act of aggression, and if that nation learns of the truth of this act by its official, it will be grounds for him to be condemned.

[This article and the following are coverage of the landing of the U. S. S. Boston 120 years ago today by different newspapers. Just as we see today, back then there was different coverage depending on what you read.] 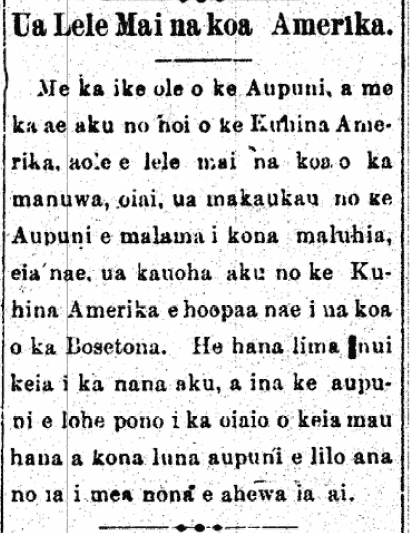