This past Saturday, at 7:30, a joint concert was held with the Hawaiian Republic band and the band of the Philadelphia, on the grounds of the Hawaiian Hotel to commemorate the birthday of the bandmaster of the Government, who is 50 years old. That night was the 4664th time he gave concerts in various locations, and this is his 500th at that place. The Government band went first, and when they were through, then there were singers of haole songs chosen from a non-Hawaiian singing group from the uplands of Leiolono, and then came the boys of the sea [from the Philadelphia]. When that was over, the two groups joined together for the ending, and that was the conclusion of the activities of the night. The band stage was illuminated by electric lights and all sorts of Japanese lanterns under tree branches. END_OF_DOCUMENT_TOKEN_TO_BE_REPLACED

There were many people who arrived at the Night of Entertainment by the Royal Hawaiian Band [Bana Lahui Hawaii], at the Hawaiian Hotel on the evening of this past Tuesday. There were perhaps 5,000 people of all ethnicities who showed up to listen to those beautiful singers of Hawaii. Because of your fine work, O Patriots, therefore the lahui showed its appreciation to you all, with them always filling the audiences of all the performances you give. The singing voices were sweet, and the most acclaimed was your “Mele Ai Pohaku.” The audience went home with happy hearts because of the mele that were played, along with the singing. When will the next performance be? Send in a notice in advance, and we will inform the multitudes and the friends of the occasion. 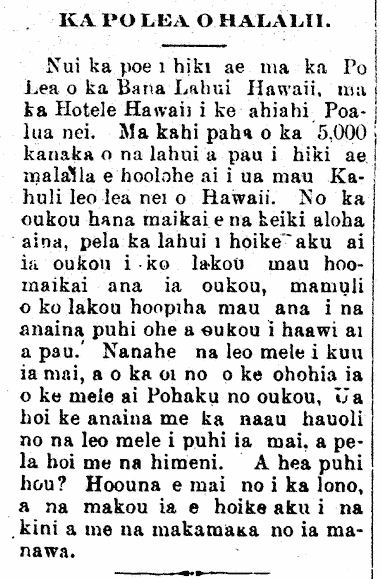 From a Travelling Englishman.

From the time I arrived in Honolulu until today, I’ve heard often of matters pertaining to those referred to as the circle of missionaries, and the dimness of their ideas; I’ve observed their actions very carefully.

I saw today in the Advertiser [Avalataisa] about the party being given for Captain Wiltse, and how they will sit at this party for two hours and a half with just wine to drink and nothing to eat.

Giving a banquet for a high ranking Captain without serving Glasses of Champaigne [Kamapeni] during all that time is like acting out Hamlet without the ghost.

This will not become something that is greatly ridiculed, but this goes back to the way of life of the old Missionaries, with  their humbling station of evil thoughts.

On the day after this party, I saw that Queen Liliuokalani was sent an invitation under the name Mrs. J. O. Dominis, and this is something quite vile by the Committee who did it; Should the Committee think that are considered adults, then it was improper of them to have sent such an invitation to the Queen.

The first thing taught to schoolchildren in Britain is not to kick a man when he falls down. But this is a woman they are kicking, and that woman is Queen Liliuokalani. This is action that can be called despicable of the meanest form, and should this Committee want to be freed of these words, then they must explain it from their side, or this contemptible act will be carried upon their backs.

[Perhaps this was meant to say that there was no wine, and only sparkling water? The article he seems to be talking about is found here on the Chronicling America site. PCA 2/28/1893, p. 2.

There is also reference to a separate party that he was invited to. The Queen is mentioned as “Mrs. J. O. Dominis”. This can be found also at Chronicling America, PCA 2/25/1893, p. 4.]

Fitting Remembrances for that Great Day.

This past Tuesday, July 31, was the day that the independence and the beloved flag of this land was restored after being seized and forcefully taken by Lord George Paulet [Lo Keoki Pauleti] on February 25, 1843, without orders from his Nation, and Rear-Admiral Thomas [Hope-Adimerala Kamaki] was the one who restored it on this day in that very year, five months and some days after it was stolen. This day is celebrated by all true patriots with many feasts all over the place.

In the early morning, the Royal Hawaiian Band [Puali Puhiohe Lahui] went to entertain the Alii, the Monarch, at Washington Place. When they entered the yard after marching from Emma Square [Ema Kuea], the door was swung open and they marched to the Ewa corner of the house and began to play. The Alii came out and sat on the lanai on that side. The songs that were played were full of reverence, awe, and joy. Outside before the front yard were the masses, and children climbed the fence and went inside. From what we saw, the crowd was looking intensely to try and maybe get a glimpse of the Alii, showing that the songs by the band wasn’t what they desired, but it was the sight of the face and the appearance of the Ruler that they were after, as it is sung: “Our desire is but for our Alii, The one we care for.” [“O ke Alii wale no ka makou makemake, O ka luhi o maua me ia nei.”]

After the music was over, the Alii stood and spoke briefly before these people who stood steadfast behind her, with words of encouragement. She stressed that the lahui keep the peace, like her statement of January 14, 1893, for the welfare of her people, and that it would be but a few more days before, according to assurances she received, that she will once again have them [? e kikoo hou mai ai oia ia lakou] go back to their lives just as before. The Alii had as well some words filled with aloha, and there was not one from amongst the members of the band who did not shed tears; some shed great many tears while blowing their noses into handkerchiefs.

That night, on the grounds of the Hawaiian Hotel [Hotele Hawaii], they gave an open concert to entertain the public, and just as was seen at the performance they put on earlier, so too was this one, and it was very well attended. Those who attended were very happy, there being perhaps 3000, from men to women, from the old to they young, and from those of high stature to low. They played without electric lights, but were illuminated by Japanese lanterns and their pewter lanterns. It would appear as if they were totally thwarted by the Government [P. G.], but in fact it was the deceitful ones who were disappointed, because they were all the more delighted. There was a single wealth-seeking haole [kolea kauahua] that we saw sitting on the lanai of the Hotel, on the Waikiki side, with his mouth wide open, maybe because he witnessed the unmatched beauty of that great night of entertainment, that person was the one with a maimed hand from Boston.

The grounds upon which it stands comprise an entire square fronting on Hotel Street. There are twelve pretty cottages within this charming enclosure, all under the Hotel management. The Hotel and cottages afford accommodations for two hundred guests. 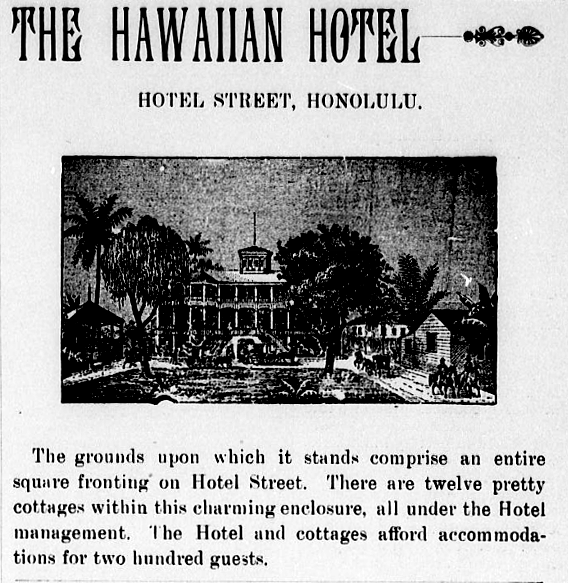 The sum of the people’s money that was spent to build Aliiolani Hale and for the purchase of the parcels of land for its grounds totaled $135,000! The losses for the Hawaiian Hotel [Hotele Hawaii] and its grounds were $116,000. However, if these two sums of money were added together, then it would not equal the costs to build the new palace, which is known to exceed costs of $300,000. We believe that there has been misconduct and impropriety in the construction of the new palace.

We wish that our many solon [solona] and the wise men of this legislative session will investigate thoroughly where the money of the people was spent rashly. 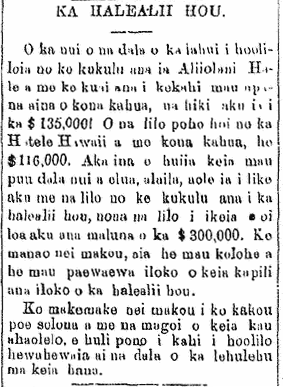